Best Manual Coffee Grinders to Boost …
Jenny Lin: Resolutely in Pursuit of E…
The Other Eleven Months of the Year
How Does PayPal Make Money? The PayPa…
Passing Trains On The Interweb 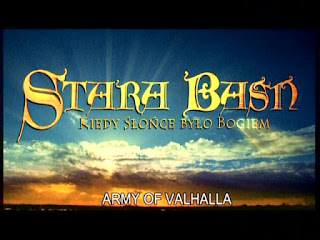 Based on historical characters and Józef Ignacy Kraszewski's novel "Stara basn."
Evil Prince Popiel (Bogdan Stupka) and wife Ksiezna (Malgorzata Foremniak) plot to murder Popiel's nephews to make their son the next prince. Then Popiel takes hostages to keep the tribes under his thumb. The witches predict that Popiel will be defeated by heroes and he will be eaten by mice.
Viking archer Ziemowit (Michal Zebrowski), son of hero Piast, saves pretty witch Dziwa (Marina Aleksandrova) in the forest. Romance must wait as Popiel's thugs are hunting down the dissidents. Guardian Piastun of the nephews (Daniel Olbrychski) is ambushed in the forest and Ziemovit saves him too. Ziemowit wants to marry Dziwa but she is already promised to Gods. Ziemowit abducts Dziwa but she stabs him. What will now happen to the prophecies?
I don't know if something is lost in the translation or did the movie change some details, as the film seems to refer the Guardian (Piastun or Piast) and Ziemowit's father as separate characters but historically Piast was Ziemowit's father.
The tribes start rebelling against cruel Popiel. Popiel recruits mercenary Vikings to crush the rebellion and sends creepy spy Znosek (Andrzej Pieczynski) to get information. The rebels prepare for war but their no-tactic attack is brutally pushed back. They need heroes to lead them. Luckily Guardian is a tactical genius and Ziemovit was just wounded. There is also girl named Mila (Katarzyna Bujakiewicz) who wants Ziemowit and goes to Witch Jarucha (Ewa Wisniewska) to get love potions. That doesn't end happily as the Vikings attack just when the magic starts to work.
Jerzy Hoffman directs historic epics that are criminally unknown outside of Poland. However "With Fire and Sword" and "Battle of Warsaw 1920" are available even as Finnish DVDs. The British DVD cover of "Army of Valhalla" looks like attempt to lure the viewers with stylized violence of "300." There are some gory battles but more in 1980s medieval war movie style, maybe Paul Verhoeven's "Flesh+Blood" or John Boorman's "Excalibur" would be closer to the depiction. However the cover is not completely misguiding as the big Viking warrior with the horned mask appears in the movie. Even without the axe he is a formidable character. He is legendary Viking Jarl Sigvald (Dariusz Juzyszyn) who actualy lived some hundred years after Popiel's reign. But this is not so much a movie about Vikings but historical fiction about origins of the Polish nation. 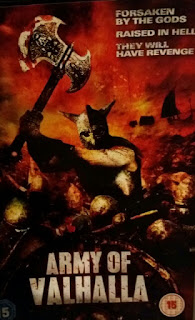 Macbethian historic adventure from pre-Christian Poland depicts the time when Odin-worshipping Vikings clashed with the Eastern European Sun-worshipping tribes and the Old Gods had not yet been subdued by Christianity. The story has bearded honorable warriors and fair maidens with decent amount of Pagan eroticism. Those who are bored with Hollywood spectacularism and special effects should try these European down to Earth historic adventures.
Rating: