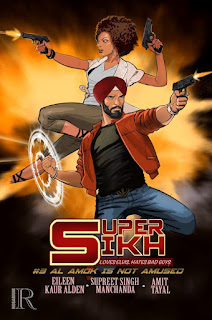 Deep really isn't going to enjoy his vacation at all. Super Sikh #3 follows Deep as he does everything but rest and relax. It also catapults Janelle into sidekick territory because she's, well she's a bad ass too.

We pick up where we left off last time. Group X has arrived at the hotel and attacked Deep. He easily dispatches two of the goons. When trying to figure out how many more there are he realizes that nobody in Group X is playing with a full deck of cards. Sure the punches could have made them loopy. We know that isn't the case. Needless to say they up the ante and start shooting through the windows. Deep uses a really cool gun...plasma rifle... I don't know. I know it's it's not a joke. Janelle picks up a gun and fires back because getting shot isn't on her to do list.

Nobody back home believes Deep because all they see is Group X having a party. I just want to add, their part is way out of hand. Chicken hats? Really? Bringing a new meaning to party animal. After a shootout at the gas station, Deep forces himself to continue with his vacation to Graceland. Things go from bad to worse when Group X launches an attack on Graceland. I don't know it was Group X for sure, but my gut tells me they did it.

This issue does a really good job of stressing that, maybe Deep isn't taken seriously at home. Janelle takes everything at face value. Meanwhile, Preeti just keeps telling him to get some sleep. Janelle has a really good point about friends being important, because Deep is going to need some friends to stop Group X.

I really can't stress how much I love this series. It's cheesy, it knows it's cheesy. It pokes fun at every action movie trope out there in the most charming way possible. There's a running gag of TSA stopping anyone brown that's appeared in every issue so far. It cracks me up every time I see it. It's never too late to hop on the love train. Things are starting to pick up so you don't want to be left behind.

Read Darrell's other work at 12AMFiction.com or join his newsletter. Maybe even be the first to support his Patreon. The CP Time and Powerbomb Jutsu podcasts.
Follow @OriginalKingD