Woman arrested while trying to sell 3 of her children 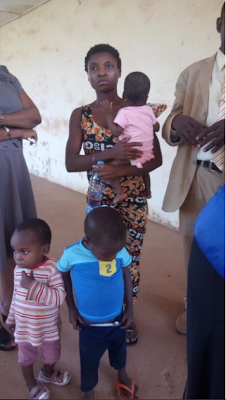 A woman has been arrested by the National Agency for the Prohibition of Trafficking in Persons (NAPTIP) in Ebonyi State, for allegedly attempting to sell her three Children in Enugu State.
The Desk Officer of NAPTIP, Mrs. Florence Onwa who stated this in Abakaliki while briefing newsmen on the rescue of the children, added that the suspect, Odinaka-Chukwu Ali, was before the incident living with her husband in Enugu State with her three children and had single-handedly cared for the children for over eight months when her husband abandoned them to an unknown destination.

According to the NAPTIP Desk Officer, “the Police arrested the woman following a tip-off by a restaurant attendant she contacted to look for a trafficker who could buy her children as she could no longer take care of them.”

The suspect, Mrs. Chukwu Ali, said she never discussed selling her children with anybody, but admitted seeking financial assistance from the public for the upkeep of the children and to pay her house rent.

She said her arrest by the police and subsequent handover to the State Ministry of Gender Affairs in Enugu State before being brought to NAPTIP Office in Ebonyi State, was a frame-up.

Woman arrested while trying to sell 3 of her children