Hal Jordan and the Green Lantern Corps #38 Review and **SPOILERS** 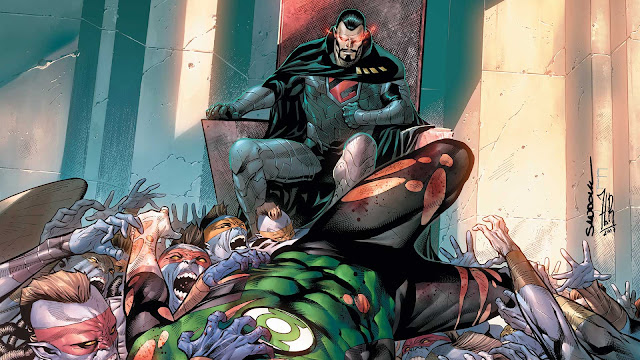 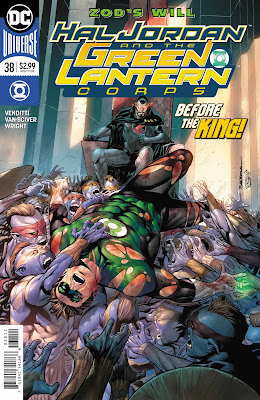 Top 3 Shaving Cream Warmers (Dispense…
SkinnyLove – Paasactie 40% korting
Do brain waves of a dying person show…
Initiate your Real Estate Rental Find…
**NON SPOILERS AND SCORE AT THE BOTTOM**
Hal and Kyle were pummeled to mucus by Zod and his family (plus the Eradicator) last issue, so I figure this issue they get wiped up with some Kleenex? Take a look at my review of Hal Jordan and the Green Lantern Corps #38, as follows!
Explain It!
On Zod’s planet Jekuul, Hal and Kyle are in holding cells within his formidable fortress. They’re pretty badly beaten-up, but it looks as though someone has applied bandages and tended to their wounds. At first, I thought it was like comic book shorthand for having been in a scrape—like how sometimes Daffy Duck could sprout a criss-cross bit of medical tape on his head after being blasted point blank by a shotgun. But no, someone has actually provided some level of medical care for Hal and Kyle, which was pretty nice of them. Not so nice is the fact that they stole both of their power rings. 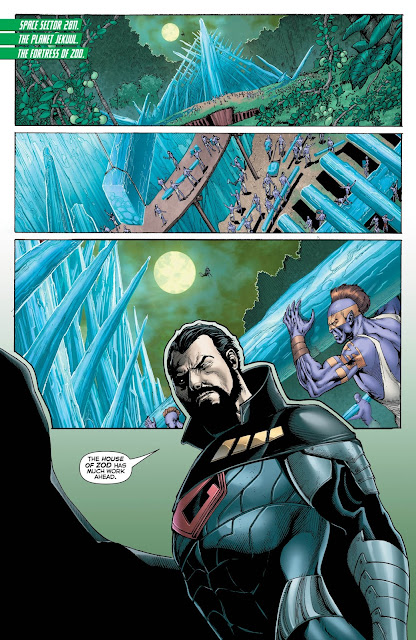 The Eradicator is hard at work trying to crack the code of these rings, meanwhile Family Zod invites Hal Jordan to come get chewed out while they eat a formal dinner. This scene is really bizarre, it’s unclear as to why General Zod summoned Hal in the first place. I suppose it’s somewhat instructive for his kid Lor-Zod, to know that Krypton exploded despite being under the watch of Green Lantern Tomar-Re. But it seems superfluous and adds little else to the story; Hal goes back to his shared cell with Kyle, and the Eradicator continues to examine the rings. There is one thing he hasn’t found, however: that Hal’s power ring is unlike any other because he forged it himself. Therefore, it is bonded to him, or whatever, so he can mentally summon it from the Power Ring Lab where the Eradicator is apparently not paying very close attention. 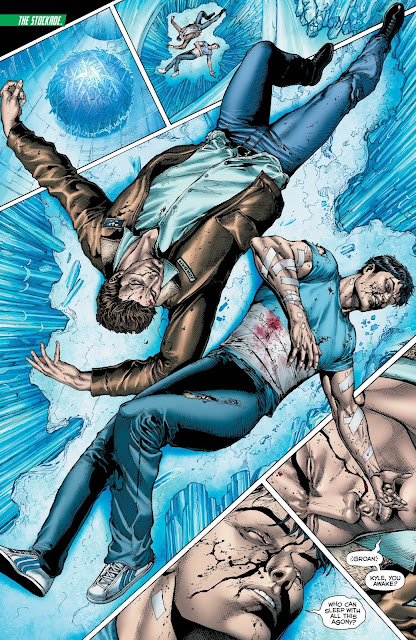 Wait, actually the Eradicator was paying very close attention—so close, in fact, that when Hal’s ring breaks free of its stasis cube, the ring blasts right through the Eradicator’s face and out through the back of his head, knocking the Kryptonian robot out of commission. Now having the ring, Hal breaks himself and Kyle free of their crystalline prison and they fly to free his slaves, the original inhabitants of Jekuul—only to find that they’re not slaves, but willing supplicants to the House of Zod! Hal could probably hold them off, but it would take time, which the ailing Kyle Rayner does not have! As the Eradicator reboots himself, the jig thereby soon to become “up,” Hal gives Kyle his power ring and tells him to get help, and tell John Stewart that little Hally Jordan’s fallen down the well! 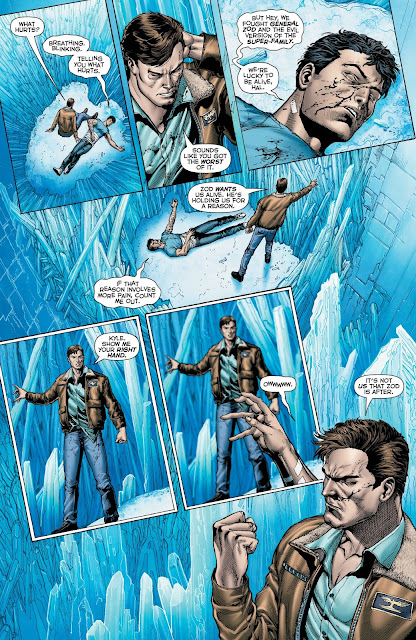 Kyle does just that, and in the next issue I assume we’ll see the House of Zod stand up to the full breadth of the Green Lantern Corps, which should be interesting. I’m curious to know how it all winds up, because in Action Comics, Superman and Booster are on this very same world, but several decades into the future—so I wonder if the events in this comic book will inform those later events somehow. On its own, this is a decent comic book, nicely-paced with some low but well-defined stakes involved, but the whole dinner date with Zod’s family seemed clunky, and there wasn’t any real action to speak of. On the artistic front, Ethan Van Sciver’s pencils are always welcome, particularly on a Green Lantern title, and it all looks top-notch in a superhero comic book sense. You could do worse than this, though I get the impression there was a bit of wheel-spinning here to get the story arc up to six issues. You’d think I’d be used to this by now. 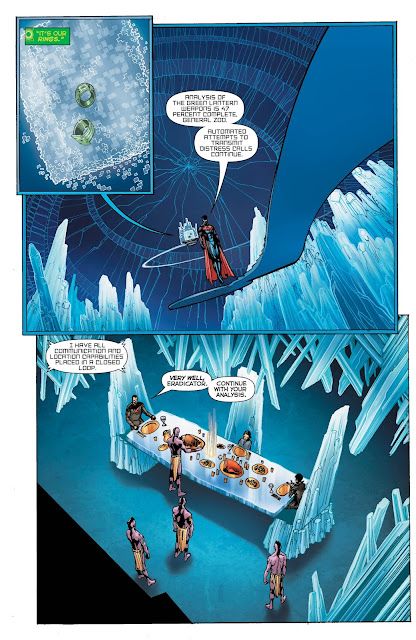 Bits and Pieces:
Kyle and Hal remain battered on Zod's stolen planet, but Hal's got a little trick...down his sleeve. This issue moves at a good clip, but advances the story incrementally and has a lot of chit-chat. I could probably read transcripts of Zod's pompous orating all day, but I don't know that I'd pay three bucks for the opportunity.
7/10

Hal Jordan and the Green Lantern Corps #38 Review and **SPOILERS**