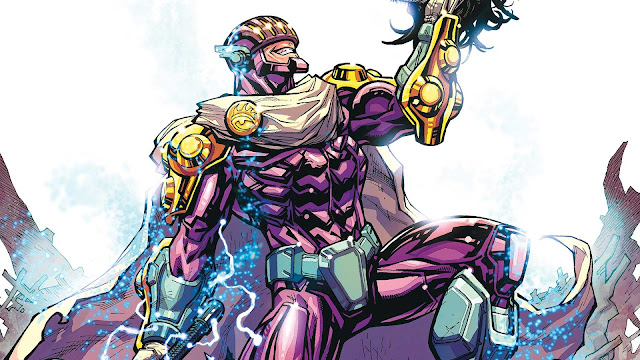 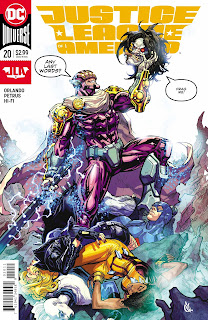 It's time to get our Justice League of America on!  Last issue, Steve Orlando left us with a decent cliffhanger that seemed to spell doom to the JLA and all the people stuck in the Sanctuary.  Does Prometheus win the day?  Let's find out...


The issue opens with a very confusing resolution to last issue's cliffhanger and only leads me to think that Steve Orlando recently watched Jaws.  Nope, no little boy spilling out onto the dock here, either.  We then head off to see Vixen and Prometheus arguing about the same exact thing they did all last issue.  My favorite part...Prometheus saying that Afterthought predicted everyone's possible move which makes no sense for his powerset or current location.  Speaking of which, shouldn't he be dead?

While Prometheus continues convincing nobody that his way is the right way, one of the people in the crowd steps up and shocks him.  I do like this part as it shows that the openness of the JLA has worked.    It all leads to the entire team going to town on the bad guy and in a pretty hilarious moment, stopping him before he gets away, but not until after some long winded monologing.  This is no Cry for Justice in any sort of way! 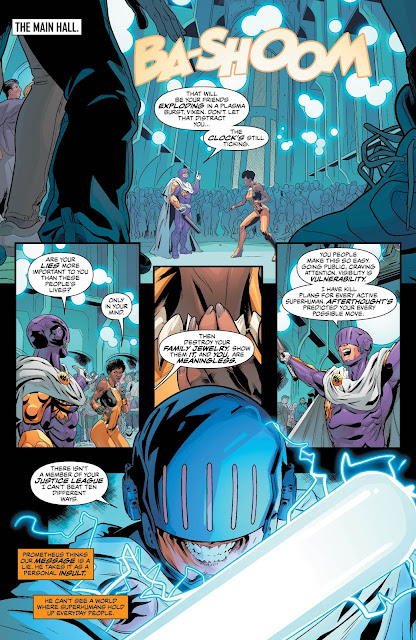 With the trouble dealt with, Steve Orlando slows things down a bit...to give us more of the forced "powder keg" that he's been trying to make stick since the beginning of the series.  It is just as ineffective here and maybe more so after twenty issues of this team working together.

It mainly centers on Lobo being an ass and Frost admitting that the "Killer" does still belong in front of her name.  It goes on way too long, but I do like that by the end, Frost admits what she did (if you were reading the Panic in the Microverse story, you can guess what it is) and says she will turn herself into Amanda Waller after things get back to normal.

There is also a little bit I want to talk about.  Steve Orlando has been telling us for issues that Batman is "off dealing with things" which I assumed meant Metal.  Well, he does make things pretty clear that is the case, but then takes it a step too far by bringing up the "Nightmare Versions of Batman".  Yes, it makes the book feel like a part of the larger DCU (which it is, of course), but made me wonder why the hell the team is sitting around arguing and not doing anything to help. 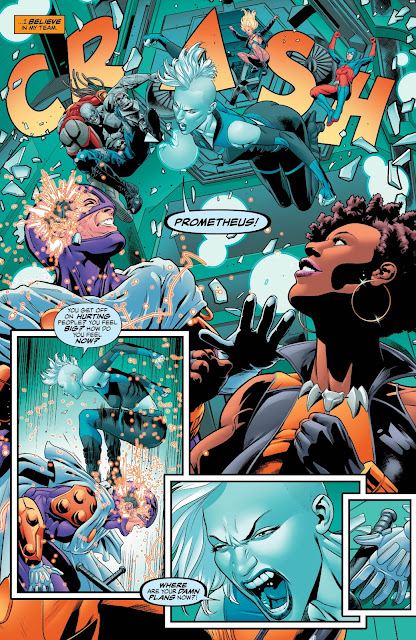 We end the book by heading off to Vanity and checking in with the Ray.  I have not been a fan of him since the series started, but actually like him here.  Maybe I just like him solo (actually, I like him with Xenos) because when he is not bitching and moaning about Batman on the reg, he isn't half bad.

This was not the worst issue I have read of Justice League of America.  Sure, Prometheus and Afterthought are defeated too easily after all the setup and the powder keg stuff is getting real old, but I liked the character moments with Frost and Vixen and finally didn't mind The Ray.  I'll consider that a win.

I have never had a problem with the art in this book and this issue is no exception.  I was a bit disturbed by reforming Lobo, but in a good way...kind of.  Overall, Hugo Petrus does a good job.

While the bad guys are dealt with too easily after the prolonged setup, I liked this issue more than what we've been getting.  Sure, there are some more forced moments, but I liked the character moments this week and even didn't hate The Ray!  Now that is something to get excited over!