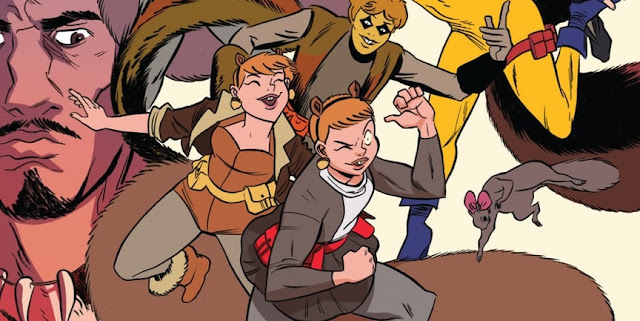 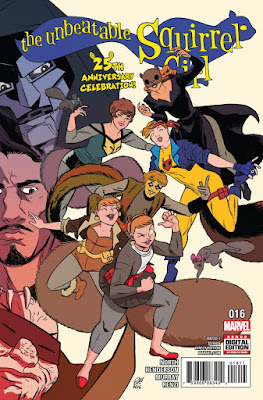 John Mcafee: I’m not an anarchist, I’…
Nusa Islands vs Gili Islands 2020 {Wh…
Beautiful Celebrity Couple Pics
Feeling cloudy may only be seasonal a…
Falling in love with Banyan Batiks Ka…
Cover Artist: Erica Henderson
Cover Price:$ 3.99
On Sale Date: January 11, 2017
**NON SPOILERS AND SCORE AT THE BOTTOM**
Hey, did you know that it’s Squirrel Girl’s 25thAnniversary this year? I didn’t know it either, until I saw it mentioned on the cover of this issue. Hard to imagine that she’s been around only 25 years, seems like we’ve known Doreen Green forever! Which, if you are roughly thirty years old or younger, could very well be true. For me, she’s a relatively new character and I can’t get enough of her. Hey, maybe this issue will be like a celebration of Doreen Green’s amazing life! Wouldn’t that just be the ticket? Read on and let’s see!

Explain It!
Would’ja believe it? It’s Doreen Green’s 20thbirthday! Which is a little strange, considering this is also the 25thanniversary of the first appearance of Squirrel Girl. So I figure we’re dealing with that ol’ “sliding Marvel time scale” (®™ Tom Brevoort) or Doreen isn’t exactly 20 years old, which is just fine by the way a lady is allowed her indulgences! This issue is sort of a Squirrel Girl “clip show,” detailing her life through three birthdays at five-year intervals! It could also be considered Squirrel Girl’s Secret Origin, except it only really shows these specific moments of her life and so it’s not complete. So it could be called Squirrel Girl’s Secret Origin of Three Birthdays at Five-Year Intervals. The first birthday is Doreen’s actual birth, which was to two regular-looking humans that met at a singles mixer. At her fifth birthday party, Doreen invites the whole neighborhood and impresses everyone with her ability to leap high into a tree with her burgeoning squirrel powers. Though normally this would cause consternation, when the party attendees tell their parents about Doreen’s great leap, they get brushed off because everyone knows kids are dopes. 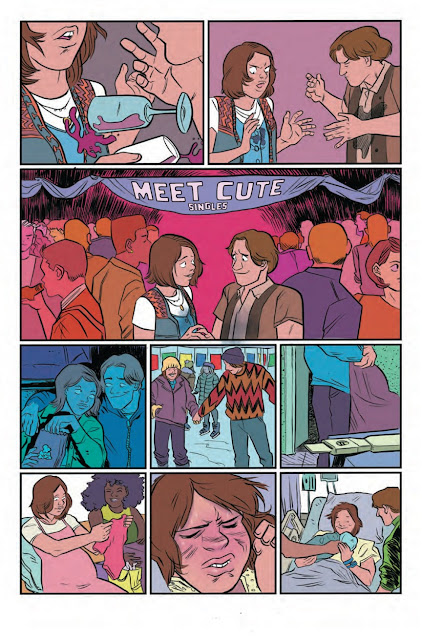 Five years after this, the Green family has just moved to a new town and Doreen is alone on her birthday, until a squirrel hanging on her window screen consoles her and they discover that they can communicate! The squirrel, named Monkey Joe (and who fans of Squirrel Girl recognize as her first “sidekick”), asks that people stop rinsing out their peanut butter jars before chucking them, before getting chased off by a noisy Corgi dog. Squirrel Girl beats the dog back with her tail, making her and Monkey Joe fast friends. Squirrel Girl is feeling powerless, but Monkey Joe points out that girl, you’ll be a squirrel soon…and also that she’s got her whole life ahead of her to find out what she can and can’t do, so she shouldn’t start closing off options now. This is something more ten year-olds should probably hear, and sound advice coming from a squirrel because I imagine they are pretty fearless, the way they scamper up trees and leap wildly from branch to roof. Not long after meeting Monkey Joe, Doreen is in art class and comes up with the name “Squirrel Girl,” as well as the first costume designed by Steve Ditko (indeed, the drawing is Ditko’s) and submits this to the teacher. I hope her work wasn’t kept on file because this is basically a signed admission of Squirrel Girl’s secret identity! 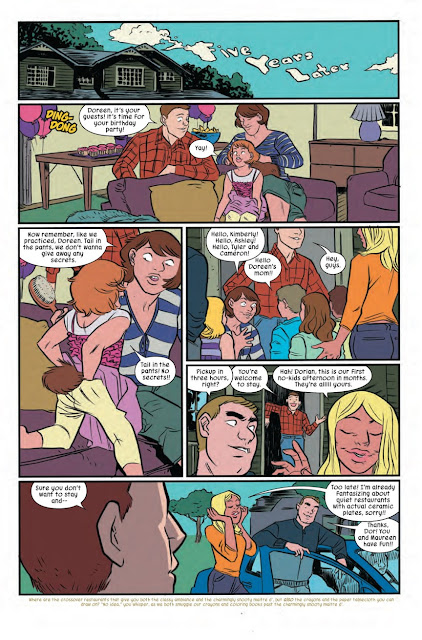 At age fifteen, in a story written by original Squirrel Girl writer Will Murray (and which takes place shortly after that first story, apparently), Doreen is chilling out with Monkey Joe when a blinded Bruce Banner slams into the roof of her treehouse due to plummeting out of the sky. He’s being chased by the Abomination, so Bruce Hulks out and they tangle, but Doreen sends her squirrel army to mess with the Abomination, then guides the Hulk’s punches so the Abomination gets knocked cold. Though the Hulk doesn’t remember meeting Doreen like literally three seconds earlier, and doesn’t want to give her any kudos anyway, Doreen is feeling pretty saucy at her success and has become the strong, defiant and inspirational character we know today. We also know that being attacked by a mess of squirrels is basically an indefensible attack, like it’s just a matter of squirrels, you could take out Galactus if you had a million squirrels to scamper all over his giant face. In the present day, Doreen celebrates her 20th birthday with friends and Avengers and some decent-looking cake. Red Skull tries to crash the party, but he picked the wrong day—not just because so many Marvel superheroes are assembled in one place, but because you can’t beat Squirrel Girl on her birthday, dude! That’s when she’s at the height of her sassiness! 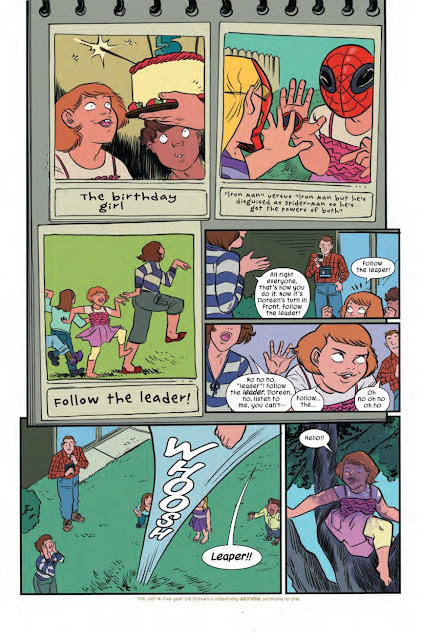 There’s a one-page epilogue that takes place five years into the future, which implies that Squirrel Girl is the leader of the Avengers and Nancy is her Communications Buddy or whatever. No word on Mew or Tippy-Toe. Also, this scene takes place right at the Southwestern corner of Union Square Park in Manhattan, which looks unusually grassy. Does the park get redesigned in 2019? Has it fallen into such a state of disrepair that nature’s reclaimed it? I need to know more about this! As for the issue, it’s cute enough, carries a good message, and provides a nice dose of fan service for us Squirrel Girl-ites. I wouldn’t, however, call this issue a good “jumping-on point,” because it’s got a lot of references that even fans of only the current series by North and Henderson might not get. 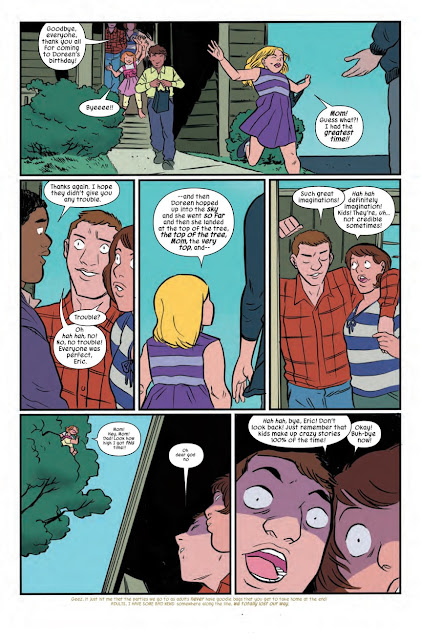 Bits and Pieces:
For Squirrel Girl's 25th's Anniversary, it's Doreen Green's 20th birthday! Don't think about it too much, you'll get a headache. This issue is some nice fan-service, and carries a good message for kids, so you can't be too mad at it. There are a few references to the original Squirrel Girl from 1992 that might be missed by new readers, but I imagine they wouldn't confuse anyone too much.
7.5/10

12 Examples of Squirrels Being Squirrels