It has been a long journey to write my Love story which began when I was 15 and fell in love with an 18-year-old from Lonsdale, Arkansas. I lived in Texarkana, and Odis Tyler had taken a job at the Texarkana Gazette. We lost contact for fifteen years and met again in 1973. 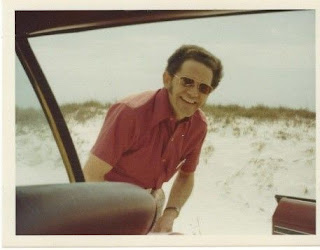 Getting into the car, he said, "Was I gone too long?"
I smiled at him. "The key's in the ignition. If you disappeared again, I could drive myself home."
Positioning himself in the driver's seat, he pinched me on the cheek, "You would too." He had a gleam in his eye, "I got you a Dr. Pepper, and you're still mean to me."
"I warned you when we first met that I was a little mean."
He leaned over to kiss me and whispered. "Yes, and I should have believed you."
As we pulled away from the gas station, the radio came on playing the end of a lively tune by Johnny Carver, I Start Thinking About You. He knew the song and said, "I'm always thinking about you and how much I love you. It makes me go out of my mind, wondering if you love me."
I winked at him, "I don't want you going crazy on me, so yes, I love you."
Patting me on my knee, he said, "Good, I want to be your sweet loving man."
We drove by the Holiday Inn on Highway 8,  where I had spent the night. Driving out of town, we crossed a long bridge over Lake Hamilton. Odis said, "Before Mark was born, I was driving around this curve into town, and a drunk driver hit me head-on. I almost died."
"Oh, my gosh. I'm glad God had other plans for you and kept you safe. He knew I would need your love ten years later."
Listening to the radio, Sonny James was singing an old sixty's song, True Love's A Blessing. Odis took my hand, holding it tight as we drove. He smiled, "There's no love like the love I found when I found you. You are my pearl."
I chuckled, "Then, I must be worth a lot of money."
"You are priceless," he said, smiling. "True love is a blessing, and you are mine. I'll always love you and be faithful."
We were both quiet as we had our right hands intertwined together. There was not much traffic driving back to Texarkana. I was tired and laid my head on his shoulder. "I love to listen to the beat of your heart and wonder what the beats are saying."
"They are saying, I love you; I love you; I love you." He lifted my hand and kissed it, and I wished this moment could last forever. I dropped off to sleep, and when I opened my eyes, it startled me. "Oh! I hope I didn't snore."
Odis grinned, "You did, but it was cute."
I frowned and stuck my tongue out at him as we drove into Margaret's driveway. He put the car in park and said, "Be careful your face doesn't freeze that way." He reached over and pinched my cheek, "But I'd still love it."
It had been a great day, and I knew I was falling in love with him and where he lived. As we got out of the car, Odis said, "I loved being with you this weekend. I hope you had fun."
"Yes,  Hot Springs is a neat town. Very different from the Metroplex, but that's a good thing.