Post Vashmalle, the makers of Aamir Khan’s Thugs Of Hindostan have released the teaser of another song which probably has been the most awaited one! Yes, its Katrina Kaif’s Suraiyya which sees Aamir Khan trying to woo the pretty lady amidst bunch of Britishers.

The teaser of Suraiyya showcases Aamir Khan as a British Officer trying to allure Katrina Kaif, but she’s busy in her own world soaring the temperature for every other man in that room. Beautiful is an understatement for the diva as she’s left no stone unturned to keep up her sexiness post her last peppy number Afghan Jalebi (Phantom). 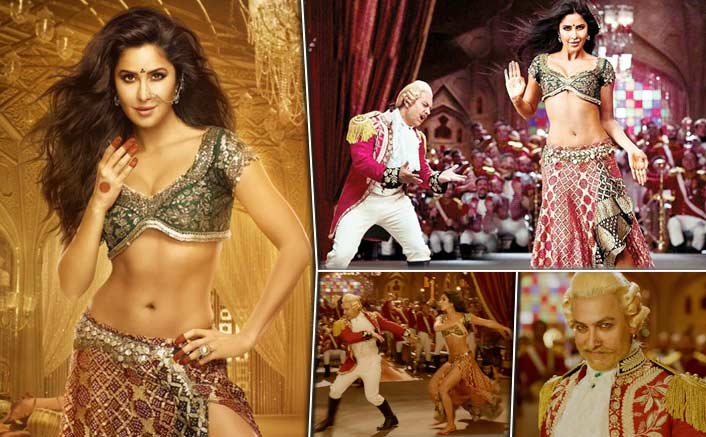 The song written by Amitabh Bhattacharya, is crooned by Shreya Ghoshal – Vishal Dadlani and is composed by Ajay-Atul. With the low hype that the makers are facing post mixed reactions to the trailer, Katrina’s Kaif peppy song is expected to do the magic for the movie which also stars Amitabh Bachchan, Fatima Sana Shaikh, Llyod Owen in lead roles.

Check out the teaser of the song here:

Moreover, the makers in the video revealed that they’re only going to showcase the whole song at the theatres, which means we’ve got to keep ourselves waiting more than the usual. But is it worth the wait? Only time will tell.

In a recent interview with leading daily DNA, Vijay Krishna Acharya, director of Thugs Of Hindostan gave insights to the song saying, “Suraiyya gives a sneak peek into the flirtatious relationship between Firangi and Suraiyya. While she is Hindostan’s most famous performer, he is an equally cunning man whom she doesn’t trust. They are an odd pair but share a fun chemistry.”

The post Suraiyya From Thugs Of Hindostan: Katrina Kaif’s Here To Literally ‘Take Your Jaan’ appeared first on Koimoi.