THE ENSLAVEMENT OF SIERRA LEONE BY THE BRITISH 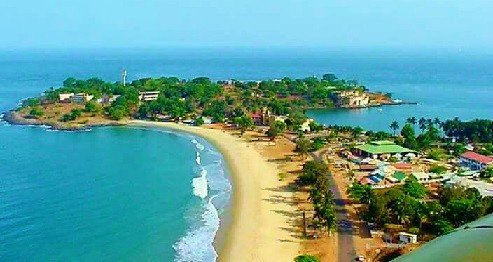 The Lumley Beach in Freetown, the capital town of Sierra Leone

In 1717, the Spanish king gave the Asiento slave import license to British traders in London, Liverpool, and Manchester, and in 1787, the Portuguese-occupied the slave center of Sierra Leone in West Africa was taken over by the British.

The St. George’s Bay Company, in London, tried to hunt slaves in the region with dark-skinned British soldiers and slaves born in the USA and Caribbean, rather than Iancandos. However, the resistance put up by the natives and the diseases brought in but not controlled by the British troops, soon wiped out this group of slave hunters.

In 1792, another 1,200 slaves were transported from the USA and Canada to Sierra Leone. They were supposed to settle in Freetown, the capital in freedom. However, unlike the Europeans, they were forbidden to own land. In 1799, when they rebelled against this dictum, they were forced to submit by British maroons from Jamaica.

With the British Slave Trade Act of 1807 and the American equivalent of 1808, the British and the US governments announced that they would be classed as piracy; transporting and trading slaves would therefore be punishable by death. However, slavery remained legal in both countries.

The countries participating in the Congress of Vienna in 1815 joined in the declarations made by both nations, yet both the USA and Britain were still active as slave transporters. On February 19, 1818, Britain and Portugal concluded an alliance in which both countries agreed not to interfere with each other's activities in abducting persons from defined areas of Africa and transporting them across the Atlantic.

In 1815, Britain established the West Coast of Africa Station with 25 warships, 2,000 officers and crew, and 1,000 'Kroomen,' ostensibly to suppress the slave trade. However, as they controlled neither French, the US, Portuguese, Brazilian nor Spanish ships, the 150,000 Africans they took from 1,600 ships must have been victims abducted by the British themselves.

It was also obvious that the British had insufficient control of the biological weapons used to abduct slaves. On average, the plague-infested swamps caused five and half times as many premature deaths among the crew as other deployments of British warships.

The inability to handle biological weapons was also noted when transporting slaves on board private traders. It was the European sailors who suffered the highest death tolls on board the slave ships. During the 18th century, the mortality rate on French transporters averaged 15%, on British ships often 25%.

The time spent at anchor off the African coast was particularly dangerous, in around 1770, several ships from Liverpool lost about 45% of their crews in this way. In Sierra Leone, slavery was legal until 1928. In 1924, 219,275 abducted people were held there as slaves.

Culled from  the book 'The Jubilee Murders, Originators, and Methods of Mass Murders' by Dr. Wolff Geisler, one of the co-writers of our prestige health blog, 'Secrets Of HIV-aids and Ebola Facts Journal.' https://wolff-geisler.de/en/product/the-jubilee-murders/

Additional Article About My Life In Freetown, Sierra Leone

After visiting the Gambia, Ivory Coast, and Guinea, I made several trips to Nigeria through the Republic of Togo and Benin. I flew from Lagos to Freetown, Sierra Leone, in 1985.

From the Lungi International Airport, I joined the ferry and landed in the capital, Freetown, in total darkness, (no electricity power), without any idea that Sierra Leone will be my second home to live and work for a living.

The Republic of Sierra Leone is a country in West Africa, sharing its borders with Guinea to the northeast, Liberia to the southeast, and the Atlantic Ocean to the southwest.

As described by the 'Nations Encyclopedia,' Sierra Leone is composed of about 20 native ethnic groups, constituting 90% of the total population. The two largest tribes are the Mende (about 30%) and Temne (about 30%). Thirty percent of other tribes include the Bullom, Fulani, Gola, Kissi, Kono, Koranko, Krim, Kru, Limba, Loko, Malinke, Sherbro, Susu, Vai, Yalunka, and the Creoles.

The Creoles are the descendants of freed Jamaican slaves that settled in the capital, Freetown area, in the late 18th Century and the account for the remaining 10 percent of the population are Liberia, Europeans, Lebanese, Pakistans, and Indians.

The British colonial masters of Sierra Leone, this partially hilly country, beautifully planned the city, Freetown, with good connecting streets. One could even walk throughout the city without joining a taxi or the “Poda-Poda,” their private-public buses.

A young child of nine or ten could direct a stranger to any of some of the streets, such as Light-Foot Boston, Savage, Sanders, Wilkinson Road, Campbell, Pademba Road, down to Congo Town, and King Tom.

It is very easy to walk from the city to Cline Town, where the country’s largest seaport, Queen Elizabeth II Port, is, even though it is quite far from the town center. For example, going to the port from Circular Road, often pronounced in Creole as “Sakula Road,” would take you between fifteen to twenty minutes.

But from the town center going through Kissy Road could take you a little more than twenty minutes. The port is one of the busiest ports in West Africa since almost the entire business passes through it. Freetown was always bubbling with commercial activities.

The High court, the General Post Office, the Head Quarters of the Barclays Bank, and almost all the governmental institutions were located close to the Siaka Stevens Street. Right in the middle of the city is the cotton tree, which is said to be over a hundred years and served as a roundabout.

From the Lumley beach towards Wilkinson Road, Sanders Street, and Savage Street, the houses are located close to the streets. From downtown Siaka Stevens Street, towards Congo Town, at the Cotton Tree's roundabout, one would have to turn right to the Pademba prison, named after the road as Pademba Road. Adjacent to the tree was the National Museum.

At the age of 28, energetic and happy, I embraced Sierra Leone as my second country. Employed at the famous Red Lion Bakery, in Kingtom-Freetown, as a van driver. I supplied bread each morning at the bread shops at Siaka Stevens Street and Kissy Road.

Both Mrs. Ashwood and her daughter, Mrs. Pamela Grant, gave me the job and the kind Savage Family that gave me accommodation, assisted me to integrate. Eventually, I naturalized and became one of them. I lived in Freetown for a couple of years and loved their food and music.

To take control of the country, rebel activities led to the worst civil war in the history of Sierra Leone. The long decade of civil war left unforgettable scars and remnants of amputees fighting for education and survival.

After the war, Sierra Leone put that bitter experience behind them without any idea that a disease called Ebola will 'miraculously appear from heaven' in 2014 to strike the country that I love so much. The horrific Ebola virus killed thousands simultaneously also in neighboring countries of Guinea and Liberia.

The Certified List Of The Best Party Hostels In Colombia 2019

CALIFORNIA - From Paradise to 'Hell'

THE ENSLAVEMENT OF SIERRA LEONE BY THE BRITISH