The big announcement of the really, really big Trump Tax Plan with the “biggest tax cuts in history” came out bigly on Wednesday, as Trump promised. Treasury Secretary Steven Mnuchin and National Economic Council Director Gary Cohn, Trump’s latest tax team, beamed proudly as they presented their baby. The stock market took a deep breath, then looked at their brainchild and completely petered out. 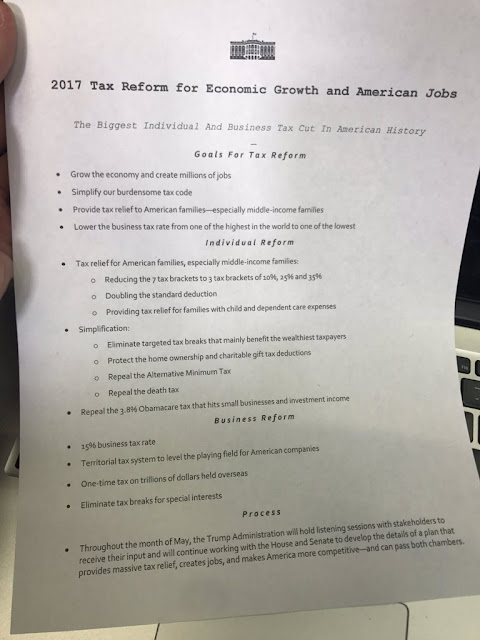 First, let me say, I clearly have nothing to recant from my earlier predictions about Trump’s tax plan. The plan that came out looks almost exactly as I thought it would — the only difference being that it is far more pathetic.

Some news organizations, getting a little ahead of themselves, talked about the US stock market taking off because of the Trump tax plan when the market first got wind that the plan had been released and heard some of the key points:

Once again, investors appear to be placing the bet that Good Donald Trump will be great for the market and that Bad Trump won’t be all that horrible. That was on display on Tuesday. The Dow Jones Industrial Average soared more than 230 points after it was reported that the White House’s tax plan, whose broad outlines will be announced on Wednesday, will propose cutting corporate tax rates to 15 percent, a Trump campaign pledge that many thought the president was backing away from. (Newsmax)

Ah, but that was this afternoon, and now it is the evening after the market plunged as steeply as it soared (and twice as far) to finish the day with the Dow slightly down from its pre-tax open — a sign of a mercurial market that was, for an instant pleased, until it started to feel a little indigestion from consuming its dinner too quickly. At that point, it barfed up all its gains for the day and went to bed sour.

What the White House billed in its release as “the biggest tax cut in history” rapidly turned into digestive gas. As I speculated earlier in the day, no real plan was released. Just gas. Once again the Trumpet blew his horn loudly (probably from his back side) as he released the big plan, and then his team turned out a summary statement, devoid of any details or calculations.

Here is my own summary of the Greatly Trumped-up Tax Plan:

The plan will eliminate estate taxes, which only the wealthiest Americans now play, helping Trump and family considerably in the future, but most of you not one iota. (This is a cut 100% for the rich, but it makes things equitable.)

The White House compensates for this by saying some other tax breaks that help the rich will be eliminated so that the plan would largely help the middle class; only, as usual, it doesn’t specify what those “other” current tax breaks are that will be eliminated. (So, read that as, “Just trust us on this one.”)

The new, new New Trump Tax Plan contains no math to show how much of a deficit the new plan will create, but co-creator Cohn offers assurances that the tax cuts “will pay for themselves” through economic growth and that the president knows we have to “be good stewards.” (“Just trust us on that one.”)

The plan comes with Cohn’s personal assurance that the president “will get this done for the American people.” (I feel better knowing that assurance is still being offered as it was in past months. I do note, though, that missing their stated and revised schedules during those months now leaves them simply assuring us it will still get down, but without anymore undoable deadlines.)

Corporate taxes will fall from 36.9% to 15%. (That will include closely held businesses and limited partnerships, like legal firms, construction companies in the oil industry, and … real-estate companies, where business income largely passes through to the owners (sometimes the family) so the business does not pay the tax but the owner does when the money passes through. (In other words, the bulk of Trump’s income tax — and his children’s — will drop from 35% to 15%, except that the plan comes with a footnote that this will be done in such a way as to insure that wealthy Americans do not exploit the change. So, we’re good! Oops, maybe not, this huge tax cut also will apply to hedge-fund managers, whom Trump promised during his campaign to tax at a higher rate.)

The plan reduces the number of tax brackets to three simple levels (10, 25, and 35 percent), and states the tax rate of each bracket. (Unfortunately, it omits stating what income levels will apply to each bracket.)

The plan comes with a note that details will be hashed out with the House of Representatives and the Senate in coming weeks. (Maybe months? Like the Obamacare repeal details got hashed out … of existence?)

“We know this is difficult,” Cohn said. “We know what we’re asking for is a big bite.” (That’s a plus because with Obamacare, “who could have thought it would be this difficult?” At least, now they’ve learned it is difficult. They have learned something on the job, so we can feel good about having a smarter team.)

It does help some of the middle-class by doubling the standard deduction for married couples, and it maintains the allowance for charitable deductions, and it says it will allow tax relief for childcare expenses (though, again, without any details).

The plan promises to alienate anyone who lives in a state with high state income tax by making state income tax no longer deductible. (No help if you’re not in such a state, and a bite in the butt if you are; but the plan softens this news by noting that this effects higher income people the most — well, yeah, the ones unlike Romney and Trump who have been known to pay no state income tax.)

The plan simplifies tax code (albeit it doesn’t tell us how, just that it WILL). This will presumably happens when congress actually sits down to create the plan with laws under Trump’s instruction that the laws be more simple. (Trust us on that one, even though everything we’ve simplified so far has been ruled unconstitutional in a court of law or died in debate.)

Repatriated corporate profits will get a one-time major tax reduction, but all profits made overseas after that will be completely tax free for years to come! (That’s a glory-hallelujah! Well, except for the detail that the tax rate for repatriation is omitted. But, hey, at least they’re thinking about it! And they’re gonna do something! Those cuts will be the “biggest in history!” We just don’t get to know how big until they figure that out. Details.)

One thing that is NOT mentioned in the Trumped-up Tax Plan is capital gains tax. If the lack of mention means there will no longer be a special capital-gains tax rate, the elimination of that gift, which goes largely to rich stock and real-estate speculators who can pay to play in that realm, is something I will like. (But the plan doesn’t say one way or another, and you can be sure Republicans will insist on putting that objectionable trickle-down part in as details are “hashed out.”)

Fine print: “details to be determined.”

Wouldn’t you know it? The one part where the devil always rests is still cloaked under a sheet to be revealed at some vague later date.

Written on all of one side of one page, the newly Trumped-up Tax Plan looks like a scheme worked out by a couple of guys in a paneled club room, smoking cigars over whisky on the rocks and deciding what sounds “great.” That’s clearly why the US stock market plunged once the cigar smoke cleared so investors could actually see the Trumped-up Tax Plan … and the napkin it was written on. How pathetic is that plan when it gives the “biggest tax cuts in history” all aimed at pumping up the stock market, and all its coming-out accomplishes is to cause the stock market to slump in disappointment? Talk about an anti-climax.

I think Trump announced, “We’re going to present our tax plan on Wednesday,” and his two tax boys said, “Yikes, we better get the plan laid out. Let’s meet tonight after work for drinks and draw something up, and then we’ll give it one of our secretaries to make it look nice.”

Where we got Trumped on this plan was in thinking a plan might actually be coming out today!

Hah! Silly us! It’s more of a promissory note, really. I’ve seen footnotes larger than this plan. What we got today was, again, nothing more than just talk! Talk about what Team Trump WILL do … whenever it is that it finally does it. They’ve managed to finish a one-page outline. I think the market rose when it heard general statements about the plan, then plunged all the way to closing when it saw that it was written with lots of white space and NO detail on one page. What the market first thought were summary statements introducing the plan, actually are the plan. Great work for your first hundred days, Boys!

Read my last article, “You Got Trumped! Trump tax plan taxing for the maestro of negotiation?” and you’ll see I sure called this one. If there is anything that has gotten to be predictable about Trump, it’s that he’s all talk all the time. He’s appropriately named after his loud and brassy mouth. Now, if he can just get his band of merry boys to orchestrate a tune. Trump promised the plan would be beautiful, and it is that; it’s written on a lovely piece of paper — very high quality like the menu at Mar-A-Lago — in an attractive font. It’s a thing of beauty. You should see it. Really, you should see it. I think it even has a picture of chocolate cake on it!

As for the timing of the new plan, Marc Short, Trump’s director of legislative affairs sought to lower expectations with the plan’s release today:

In the coming weeks, Trump will solicit more ideas on how to improve it, Short said. The specifics should start to come this summer.

Should start to come in? Sometime this summer we should START to see the specifics. After that comes all the arguing in congress about the specifics, which, then, get respecified, as they did with Obamacare because none of this plan has been presented to Democrats, and I find it highly doubtful Republicans can get an entire revision of the tax code done through the more simplified “reconciliation” process that doesn’t allow filibusters. When asked whether or not he’s reached out to moderate Democrats for input on the plan, Cohn only said he “hopes Democrats won’t get in way.”

Hmm. I’m thinkin’ they will. They’re like that. This is a dream plan only in the sense that the White House is dreaming if they think this is going to become a bill that revises the whole tax code without Democrat involvement. But, who would have thought that tax reform could be so difficult? Right?