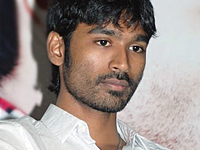 It seems of all the young actors today it is Dhanush who is having the best of times. Dhanush who is considered a director’s actor never disappoints his directors with good scripts.

In the recently released ‘Aadukalam’, the director Vettrimaran and the actor Dhanush both have hit the bull’s eye. The successful duo may again come together for another classic in 2012.

Meanwhile, Dhanush is carefully managing his career with films for both critical acclaim and also box-office success. After the art house commercial film ‘Aadukalam’, Dhanush has moved over to a masala entertainer ‘Venghai’ by Hari.

Then he will have ‘Seedan’ in which he plays a cameo yet an important role and then there is the much awaited film ‘Maapillai’. After doing a couple of commercial entertainers Dhanush will again settle for an experimental film ‘Irandam Ulagam’, by Selvaraghavan.

But what follows after that will be a surprise. Sources say Dhanush has agreed to do a film for director Chimbu Devan who knows the knack of attracting the kids and family audiences in a single film. The ‘Imsai Arasan 23am Pulikesi’ director is said to have floored Dhanush with a fantasy story that has all components for a family entertainer. It is going to be produced by a happening big banner and now Chimbu Devan is perfecting the script.