Story of Mumbai – Goddess of the Western Sea 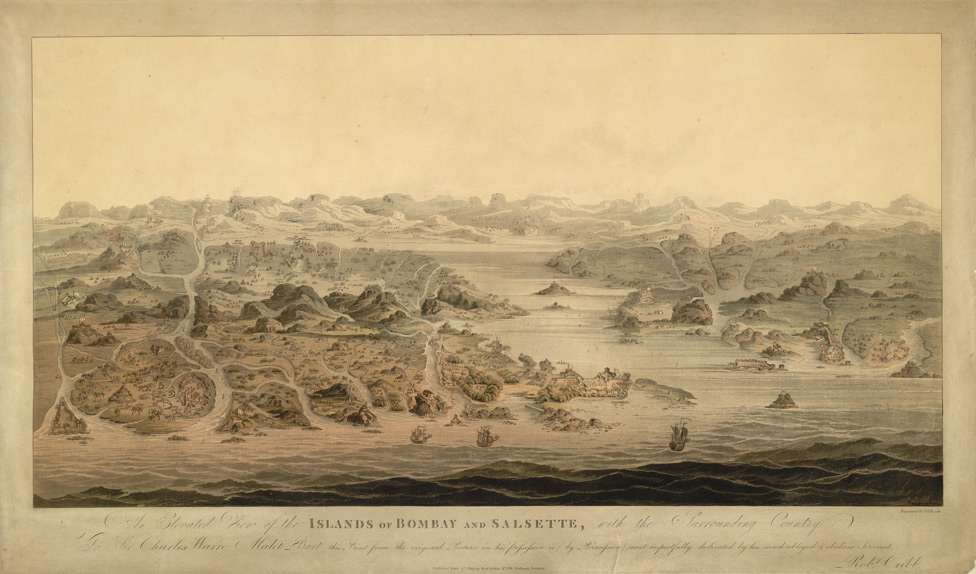 ‘An elevated view of the Islands of Bombay and Salsette, with the surrounding country’. Aquatint by J.S. Barth, published by Robert Cribb, London, 1803 1449. Image source: British Library
Mumbai (former Bombay), the dream city of millions and the gateway to India, is the principal seaport and the financial capital of India. But nobody can imagine what this place was a couple of centuries ago. Back then, the Island City consisted of seven islands—the Heptanesia of Ptolemy—that were just swamps, full of mud. With sparse population of Kolis (fishermen), Bhandaris (Toddy trappers) and robbers, life was miserable. There was mud everywhere one stepped and feet had to be washed at the appropriately named Pydhonie. Life was unsafe and no British officer was prepared to be posted here.

Man appeared in Mumbai half a million years ago and has left behind his stone tools which have been found at Kandivali. The Bible refers to trade with Ophir (Sopara) some three thousand years ago which can be substantiated by linguistic evidence. Sopara (Shurparaka) which is a suburb of Mumbai was the principal seaport of  India and frequently figures in Buddhist literature as also in the accounts of Classical writers. It was sacred because the Buddha is supposed to have been born here as Bodhisattva and hence was known as Sopara Bodhisattva. Purna, a trader of Sopara, travelled to Sravasti, listened to Buddha’s sermons and became a Buddhist. He built a sandalwood monastery at Sopara. Buddhism thus reached Maharashtra as early as it reached North India. Considering Sopara’s association with the Buddha and its commercial importance, Ashoka (272–32BCE) installed his edicts at Sopara and built a stupa here. It was later enlarged in the time of Yajnashri Satakarni (170–99 CE).

Ghana to Have its Own Digital Currenc…
Nusa Islands vs Gili Islands 2020 {Wh…
Best Places Where You Can Plan Your D…
10 Elite Special Forces From Around T…
Amazing Aquatic Minecraft PE Seed [1.…

Mumbai has had a chequered history. After the Satavahanas, the Traikutakas ruled over the Konkan with their capital at Puri (present day Gharapuri, the Island of Elephanta). They were soon subjugated by the Kalachuris of Central India who also had their administrative centre at Gharapuri if such an impressive monument like the main cave at Elephanta is any indication. Puri or Gharapuri was a harbour and an international trading centre, renowned enough for the Chalukyas of Badami to capture it. The Aihole inscription of Pulakeshin II (609–42 CE) describes it as “the Goddess Lakshmi” of the Western Sea, the goddess of wealth and prosperity. The Shilaharas (800–1200 CE), however, shifted their capital to Thane (Shristhanaka). This was the time when the Arabs, Jews and other foreigners started coming to Mumbai and settled there. After Allauddin’s con-quests in the Deccan,  the Muslims ruled here but sold the islands to the Portuguese who in turn, gave it as a part of the dowry of the Portuguese princess Catherine Braganza who married the British king Charles II in 1665. The British then sold it to the East India Company for a paltry sum.

The British were hardcore traders and recognized the commercial importance of the island as the only natural harbour. But the main problem was that the seven islands, referred to as Heptanesia by Roman writers, were separated by narrow creaks. More particularly, the central part would be flooded daily during the high tide making a large part swampy and muddy. It was therefore decided to fuse the islands together in order to make them habitable. In 1727, an attempt was made by Captain Elias Bates to fuse the gap between Mahalakshmi and Worli but it was broken by the strong waves. Later when William Hornby became the Governor in 1771, the work was again taken up and the breach was closed at great cost. It is known as Hornby Vellard. The central area then became habitable and the city began to develop fast. Land became available for settlement and agriculture and the population increased so fastin a short period of time that from a sleepy village Mumbai rapidly became a metropolis.

Another factor which contributed to the phenomenal growth of Mumbai is that it is a natural  harbour. Even Kolkata and Chennai are riverine ports.

D. Deshpande, an eminent geographer states, “The early ports of Western India are situated on narrow and shallow creaks. Refuge from the monsoon problems was sought by selecting a site behind a sand bar far back into the estuarine waters. Many of them like Surat were improved to accommodate larger ships, but most of them fell into disuse because of the natural limitations of the site. By such natural process of selection throughout the centuries Bombay was discovered in the 17th century when the sailor was ready to handle ships of larger dimensions drawing a deeper draught and requiring greater anchorage and berthing facilities. With a spacious harbour that covers an area of 120 sq. miles of sea surface, and a depth of over five fathoms in the main road, Bombay fulfills all the needs of modern navigation. Antonio de Mello de Castro, Viceroy of Goa, wrote to the king of Portugal in 1662: “The best port Your Majesty possesses is in India.”

As early as in 1634 the Portuguese realized the potentialities of Bombay. It was with genuine reluctance that the local authorities surrendered the island to the English in 1662.

Mumbai was a trade centre from an early period when Sopara, Kalyan and Chaul flourished during the Mauryan and the Satavahana times (300 BCE–300 CE). But in the post- Satavahana era, Puri or Gharapuri rose into prominence. It has been described in the Meguti temple inscription at Aihole of the Chalukyan monarch Pulakeshin  II (606–45 CE) as the “Goddess of the Western sea.” This appellation perfectly fits Mumbai which is truly the goddess of prosperity of the Western sea.

The post Story of Mumbai – Goddess of the Western Sea appeared first on Heritage India Magazine.

Story of Mumbai – Goddess of the Western Sea