Readers of the respected Morocco World News have expressed astonishment in one of their latest stories, in which they expose the treatment they received from a supposedly professional marketing organisation in charge of publicity for the Fes Festival of World Sacred Music

The story pulled no punches and stated that "journalists and staff of Morocco World News express their strong condemnation of the insults, defamation, and humiliation directed at them by Publikart and its director, Mrs. Sanaa Smiyej."
As shown in the screenshot posted below, during a professional communication, Mrs. Smiyej called the journalists of Morocco World News “fake journalists,” even going as far as to characterise them as “vermin” and “scumbags.” See the full story here. 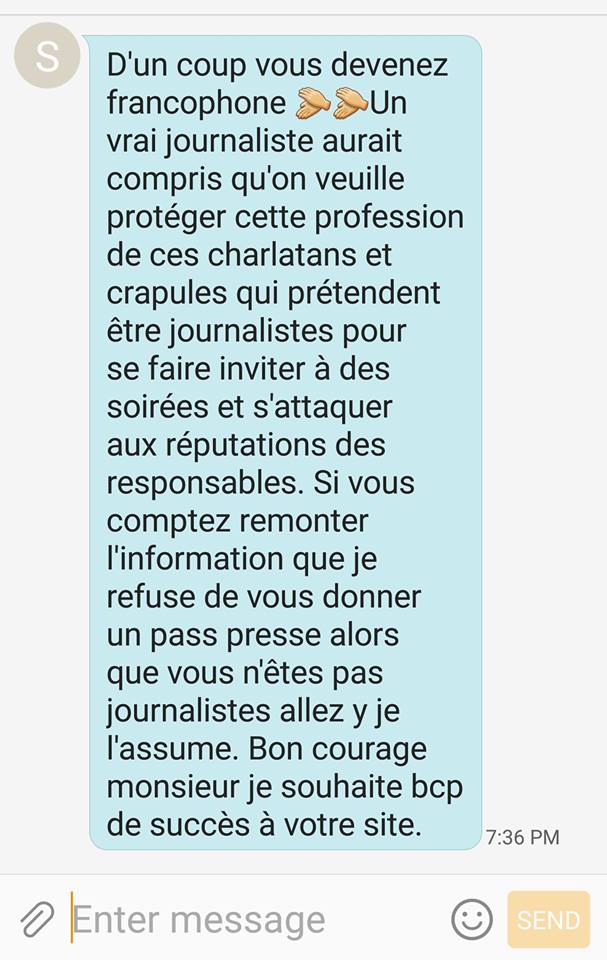 "The festival belongs to Morocco as a whole and does not belong to a person or a company. I won't keep quiet in front of disrespect - and this company has disrespected Moroccan media and international media." - Adnane Bennis

The View From Fez (which is an accredited Festival Media Partner) can report that this is not the first time that Mrs. Sanaa Smiyej has showed a lack of understanding of the importance of Social Media outlets. Despite our many attempts to contact her to arrange interviews ahead of this year's Festival, The View From Fez has been ignored. This, despite Mrs Smiyej receiving a direct instruction from the Festival director.  As a social media outlet, The View from Fez has been read by over 4 million visitors, plus many more on Twitter and our Facebook pages.

To put things in context, social media play an equally, if not more important role in covering the festival than do traditional media outlets. Most visitors to the Festival access information online prior to their arrival and during their stay.

The View From Fez has been covering the festival for more than a decade and is the only media organisation to publish reviews of all the events and concerts. Our team are all professional reviewers and our photo-journalists, responsible for our hundreds of photographs, are respected, award winning professionals.
In contrast, the so-called mainstream media publish few reviews and often no more than four or five stories. In some cases, feature articles come out after the festival has concluded.

It should be pointed out that neither Morocco World News or The View From Fez is criticising the Fes Festival team, from whom we have always received courteous attention.

We are disappointed that what should be an essential component in assisting journalists to get the news out about the wonders of the Festival has been so poorly handled.

Empire of Language- Prelude-Metaphors…
كيفية التعامل سفر الزوج الطويل
What is Conversion Tracking? How to S…
The Neighborhood Bar that Grew Three …
Signs That You’re In A Healthy Love R…