GALA DALI – THE MUSE OF THE SURREALISTS 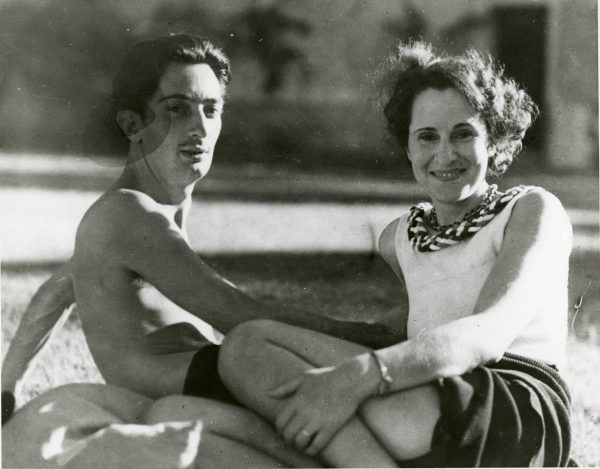 Dalí and Gala were a double act. She wasn’t his model or manager. He wasn’t her lover or provider. Gala was Gala, ruthless, implacable, that icy promiscuous fusion of liberation and desire that awakens the juices of original thought and creativity. In the soup of Salvador Dalí, Gala was the spice.

Gala was a Tatar born Elena Ivanovna Diakonov in Kazan on 7 September 1894. She contracted tuberculosis and was sent aged seventeen to the Clavadel sanatorium near Davos in Switzerland where she met the French poet Paul Éluard. She married him, inspired him, moved to Paris and deserted him for Dalí. Éluard wouldn’t let a line of verse draw breath without the kiss of Gala. Dalí signed paintings Gala-Dalí. Not that she held a pen or brush. What she held up was a mirror. She was an artist of the senses without the need or drive to write or paint. 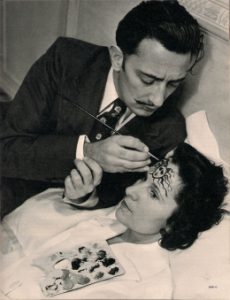 Dalí could have found any number of beautiful women or boys to replace Gala but beauty tires and the muse is elusive. Gala was his Lady Macbeth, his lucky charm, the female he would have been had he been female.

Gala was boyishly attractive with Slavic cheekbones, chestnut hair and delicate features concealing her wanton nature. Her eyes were agate magnets, sullen and mysterious. They could pierce walls, Éluard wrote, and when they married she demanded complete freedom of sexual expression which he granted, even encouraged.

Gala arrived in Cadaqués in the summer of 1929 with Éluard and their daughter, Cécile. René Magritte and his dull wife Georgette were staying at Fonda Miramar with the Belgian art dealer Camille Goemans and his sylphlike girlfriend Yvonne Bernard. In spite of its lack of a road, Cadaqués had been discovered by the Paris avant-garde and the appearance of this exotic group would be covered in the columns of the fortnightly newspaper Sol Ixent. To complete the unlikely gathering, Luis Buñuel turned up on the boat from Roses with a film script Dalí ignored.

Dalí and Buñuel had achieved grand coups de théâtre with their banned and blasphemous films Un Chien andalou and L’Age d’Or. Buñuel needed Dalí to add the magic of his Paranoiac Critical Method to a new screenplay, but Dalí with his obsessions and compulsions could only focus on a singular passion: the pursuit of Gala. The Paranoiac Critical Method was Dalí’s way of perceiving reality in a bagatelle of ‘irrational knowledge’ based on a ‘delirium of interpretation.’

Buñuel grew to hate Gala, just as the village women grew to hate Gala, and the village men said they hated Gala. To augment this circle of mutual loathing, Gala was initially revolted by Dalí’s absurd (surreal?) behaviour. He dressed for her in rags with one breast showing and his body covered in goat’s dung. Gala’s first impressions softened. She began to appreciate the depth and subtlety of Dalí’s genius and saw in his work the golden cage and mink clad walls of her own security.

They spent private moments together on the rocks around Cadaqués and she whispered words so curious they captured the young painter’s heart: ‘I want you to kill me,’ she said and Dalí had found his muse. Paul Éluard returned to Paris with Cécile and his wife remained forever.

Dalí prized Gala’s avarice, her strength of purpose, her dark, enigmatic moods, her agate eyes that terrified all whom looked into them. Once, when Jean Levy was visiting Port Lligat, while Dalí and Julien Levy, his first New York dealer, sat in one room talking, Jean sat in another with Gala and for more than an hour not a word left Gala’s lips. ‘She just stared at me with eyes like a pair of nails.’

Gala was intimidating and this Dalí adored. He adored her temper, her vindictiveness, her sudden and irrational animosities, her violence. She once stabbed out her cigarette one the back of the hand of her dinner companion at the Hotel Duran in Figueras ‘because he was boring me to death.’ Gala was from another place and another century. Dalí played the madman but his madness was a improvised. ‘The only difference between me and a madman,’ he said, ‘is that I am not mad.’ Gala wasn’t playing. She was truly mad, a chromosome away from howling clinical dementia, a state that created such a high level of self-possession, she was impressed by no one, respectful of no one and the feelings and opinions of others bothered her no more than flies on the face of a marble statue.

Dalí revered the voracity of Gala’s sexual appetite – she was said to have slept with every fisherman in Cadaqués. While detesting physical contact himself, he saw in Gala’s emancipation the dynamic route to the subconscious he was exploring for the images that crowded his best work, the canvases he painted during those early years with Gala. 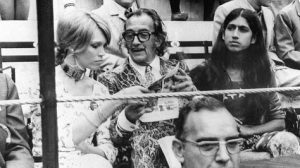 Freud was busily telling everyone all neuroses stemmed from man’s inability to live in a natural state and the Surrealists believed the natural state was free love and open sex, a vision that bore fruit thirty years later at the Dawning of the Age of Aquarius, as Jerome Ragni wrote in the musical Hair.

Text adapted from ‘Sex, Surrealism, Dalí and Me, the Memoirs of Carlos Lozano,’ available on Amazon.

The post GALA DALI – THE MUSE OF THE SURREALISTS first appeared on Clifford Thurlow.

GALA DALI – THE MUSE OF THE SURREALISTS