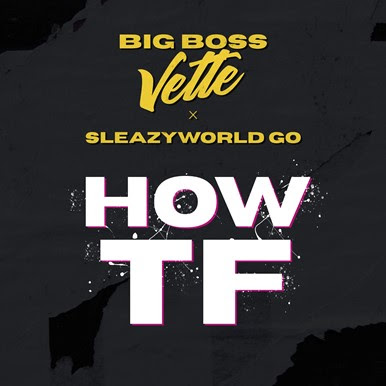 BIG Boss Vette UNLOADS NEW SINGLE “HOW TF” FEAT. SLEAZYWORLD GO HEADLINES THE SNATCHED TOUR THIS FALL
Over a hard-hitting beat Big Boss Vette seamlessly trades slick bars with Sleazyworld Go as they candidly observe and rhetorically question the new status of their success. Pride rips through their lyrics as they confidently ask, “How the fuck, Did I just spend 150 on a Benz?” and “How the fuck, Did I run up all these M’s from a pan?”
Gearing up for a cross-country takeover, Big Boss Vette is preparing for her first-ever national headline run, The Snatched Tour. It kicks off on October 17 at DC9 in Washington, DC, visits major markets coast-to-coast, and concludes with a bang on November 2 at Subterranean in Chicago, IL. Tickets are on sale HERE. Check out the full confirmed itinerary below.
Meanwhile, she proves unstoppable this year. She recently unleashed the Remix of her breakthrough banger “Snatched” [feat. Flo Milli & Saucy Santana]. Between the Remix and the Original, “Snatched” has reeled in 10 million total streams and counting. E! hailed it as “a powerhouse official remix,”  and XXL named it one of the “13 Best New Hip-Hop Songs This Week.” UPROXX noted, “Big Boss Vette, Flo Milli, and Saucy Santana are beaming with confidence.”
The original “Snatched” affirmed Big Boss Vette as a star-on-the-rise. It gathered nearly 2 Billion views on TikTok across over 460K creates by some of the biggest names in the world, including Kylie Jenner, Khloe Kardashian, Halle Bailey, JT of City Girls, Mikayla Nogueira, and more. Thus far, it has amassed 23.3 million cumulative streams and counting. It emerged as “the most added song” at Hip Hop radio, while the video impacted rotation on BET, Yo! MTV, and REVOLT. She also sat down with Republic Records TV for “Get To Know” and “Behind The Scenes” of her Instagram.
Big Boss Vette continues to make waves across the culture. Most recently, Pitchfork touted her single “HEAVY” among “The Ones” as the “must-hear rap song of the day” before going on to note, “On ‘Heavy,’ she declares that even a bullet couldn’t make her quit. By the time the song is over, you can’t help but believe her.” DJ Booth championed her among “10 Rappers You Should Know Right Now on Audiomack,” and Audiomack showcased “Eater” on the “GOOD GOOD” playlist as part of the platforms Women’s History Month celebration. The music video for “Eater” continues to light up regular rotation on BET Jams and BET Hip Hop. She has also appeared on What’s New in Da Lou?
Meanwhile, “Make Em Mad” soundtracked an episode of HBO’s EMMY® Award-nominated Insecure from creator Issa Rae. It played during a key scene of episode 2 from the farewell season 5. Big Boss Vette excitedly broke the news on social media.
Now, she’s got even more heat on deck. You’ve been warned. There’s a new boss in town.
The Snatched Tour Dates
10/17 Washington DC               DC9
10/19 Atlanta, GA                      Aisle 5
10/24 Dallas, TX                       House of Blues Cambridge
10/25 Houston, TX                    House of Blues Bronze Peacock
10/26 Los Angeles, CA             The Roxy
10/30   New York, NY                Baby’s All Right
11/2     Chicago, IL                    Subterranean

Outdoor Sofa vs. Outdoor Sectional – …
Why SEO Is The Next Big Thing in the …
how to remove dark circles in 2 days
Cost to Epoxy Garage Floors
Medical Equipment for Molecular Diagn…
Follow Big Boss Vette on Instagram, TikTok, Twitter, YouTube, and Spotify.

This post first appeared on FADED4U, please read the originial post: here
People also like
Outdoor Sofa vs. Outdoor Sectional – What Is The Difference
Why SEO Is The Next Big Thing in the Real Estate Industry
how to remove dark circles in 2 days
Cost to Epoxy Garage Floors
Medical Equipment for Molecular Diagnostics Lab
Tips For Improving Mental Health Through Exercise
Earn Extra Income From Home