Underwater Love also known by its original Japanese title ‘Onna no Kappa’ is a whimsical, eccentric, off the wall affair. A bizarre mix of explicit, uncensored romance & sea folklore wackiness. Sprinkle a dash of musical into the pot and you have a truly surreal recipe.

Underwater Love revolves a former classmate returning to life to save his high school crush from the God of Death as a ‘Kappa‘.

A Kappa can be described as a half-man, half-amphibious sea monster of sorts originating from traditional Japanese folklore. Kappas require a steady stream of water pouring on their dish-like scalps to survive the outside world. If their scalps dry up, they’re unable to continue moving. The Kappa, Tetsuya Aoki, played by actor Yoshirô Umezawa, rises from the depths one day by a fish factory… Where Aoki’s onetime high school crush Asuka Kawaguchi, now in her thirties, works.

Asuka Kawaguchi, played by actress Sawa Masaki, is thrilled with the encounter and begins to harbor feelings for her former classmate… Despite already being engaged to her boss. However, Asuka fights back the curiosity. Sending Aoki on his way back to his ‘home’ swamp, only for him to show up at her job as a new employee the next day.

Aoki claims to be sensitive to sunlight and wears a rather poorly put together comedic disguise, with full on sunglasses. Literally, looking like the episode of Teenage Mutant Ninja Turtles where Raphael is disguised in a detective’s uniform. Except in this case, Aoki’s full Kappa shell is showing and the boss of the fish factory still can’t tell. Though Asuka flirts with Aoki, she denies his request to stick with her for the day. A fellow co-worker Reiko Shima, played by Ai Narita, notices Aoki’s rejection and takes a liking to him. She unknowingly leads Aoki to his old house before he died and became a Kappa and they engage in ‘relations’.

Reiko is not bothered by Aoki being half-sea creature at all, instead getting excited about the prospect. Underwater Love doesn’t hold back in these shots either, having Reiko comedically reveal the Kappa’s intimate parts. After cuddling, Reiko would figure out Aoki has feelings for Asuka, locating an old high school era love letter. Reiko actually encourages the half-man, half-fish creature to express his feelings. Asuka’s boss/fiancee actually finds Aoki in their house and instantly becomes furious… Bothered more by Asuka’s potential cheating than the fact there’s a half-man, kappa sitting on his couch with a beak, scaled arms, and a turtle shell.

Instead, boss Hajime Taki, played by Mutsuo Yoshioka, tells his lukewarm fiancee the wedding is off if she sees Aoki again. Naturally, Asuka not only sees Aoki again but runs away to the mountains with the promise of alluding her fate from the ‘God of Death’ [Fumio Moriya].

The ‘God of Death’, looks like he just left Woodstock. Always a cigarette in hand, bandana, slump-y walk. Asuka and the ‘God of Death ‘engage in what else? A sumo fight and Asuka wins. 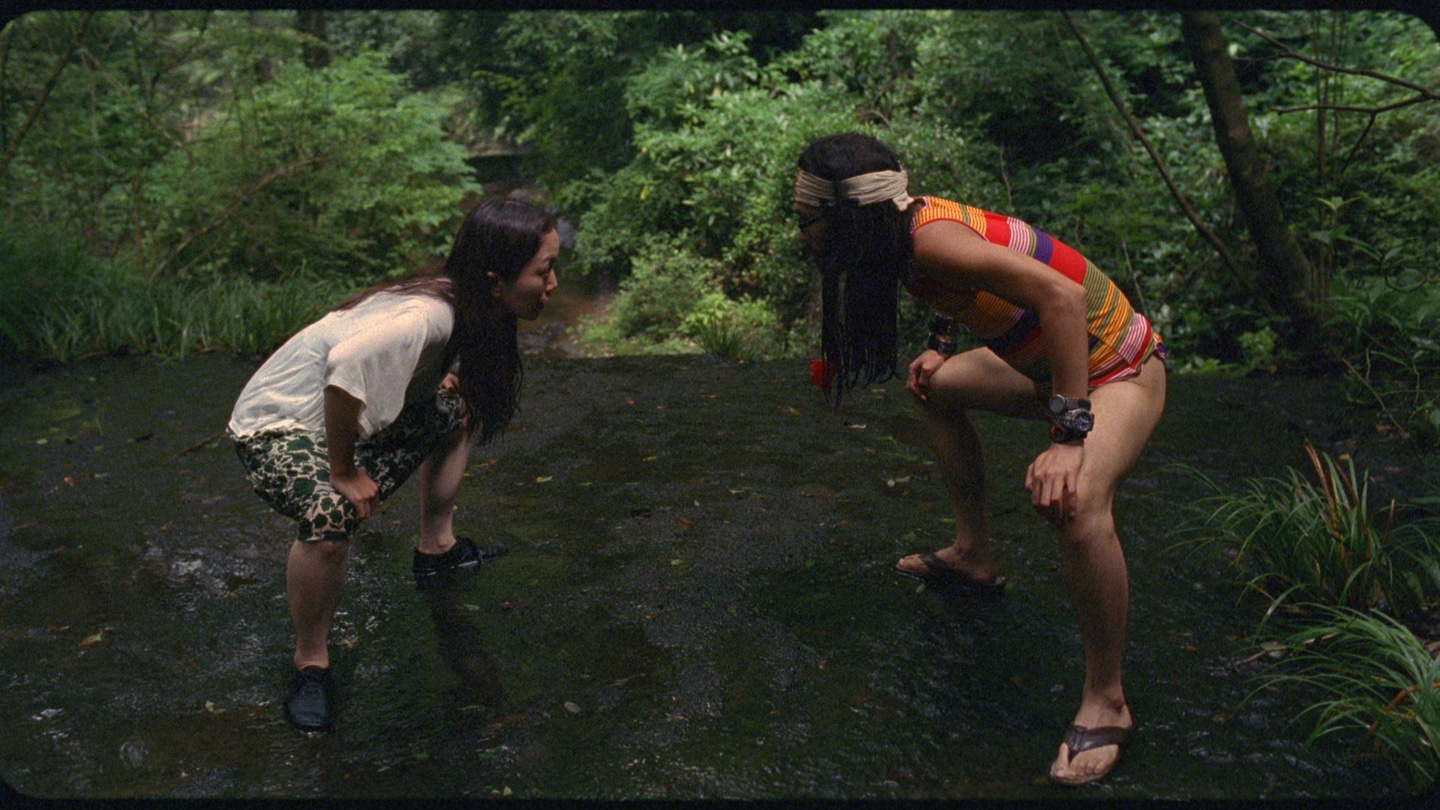 However, there still needs to be a sacrifice and Aoki offers his life for Asuka’s, which the ‘God of Death’ accepts.

Normally, a film might end here in some pronounced tragedy… But Asuka instead decides to engage in ‘relations’ with Aoki until he comes back to life in human form. But then promptly disappears in a cloud of red smoke mid-relations.

Not exactly a princess kissing her frog prince happy ending story here. Flash forward to Asuka’s work at the fish factory, where she sends her own high school love letter to Aoki back to sea… (Director/Writer) Shinji Imaoka and (co-writer/actor) Fumio Moriya’s film has an innocence about it despite obviously not being a movie for the whole family. At its core, Underwater Love is still a movie about closure on an unrequited romantic crush. The love letters, the musical elements, the dancing are proof of that. In Aoki’s own words, he loved Asuka because even years later she had an eternal youthful spirit.

Underwater Love’s ‘mature’ themes spliced with naked comedy however, take it into an extremely surreal direction. The film is intentionally comical and outlandish.

To be frank, it’s an amusing niche production. It’s a fun night film you catch randomly blaring on television at 3 a.m. on the sci-fi channel and before you know it, you’ve watched the whole thing.