Lodge 49’s latest episode spotlighted Jackie Loomis, who cynically believed her story would be a footnote, if not left with her lover.

‘I’d gotten used to being erased out of my own stories’ – Jackie Loomis. Tonight’s Lodge 49 shed backstory on its audience about Larry Loomis’ mother, Orbis, and the pilfering of the scrolls from Lodge 1 in England. Jackie is presented as a woman keen on stepping aside to prop her lovers’ egos. At one point, she makes a suicide pact with her first romance after Larry’s father passed… After letting him drink his deadly brew, she decides to forego the quaint end herself. However, Jackie leaves behind a diary of her journey and findings on his body. She believed it would be more likely to be found on a man’s corpse, rather than on its own.

The discovery of the diary is made by Blaise, who is superimposed on Jackie’s memories throughout the episode. Meanwhile, Dud is suffering from his unquestioned, cult-like belief in Blaise and his manic state. Dud prefers Blaise’s remedies to the hospital and essentially made him his defacto medical practitioner. Yet, Blaise is no doctor. He pulled out a shark tooth out of Dud’s leg this episode and they both laughed… Despite, Dud’s infection and worsening condition. Who knows the real damage being done to Dud every moment he doesn’t get real treatment? 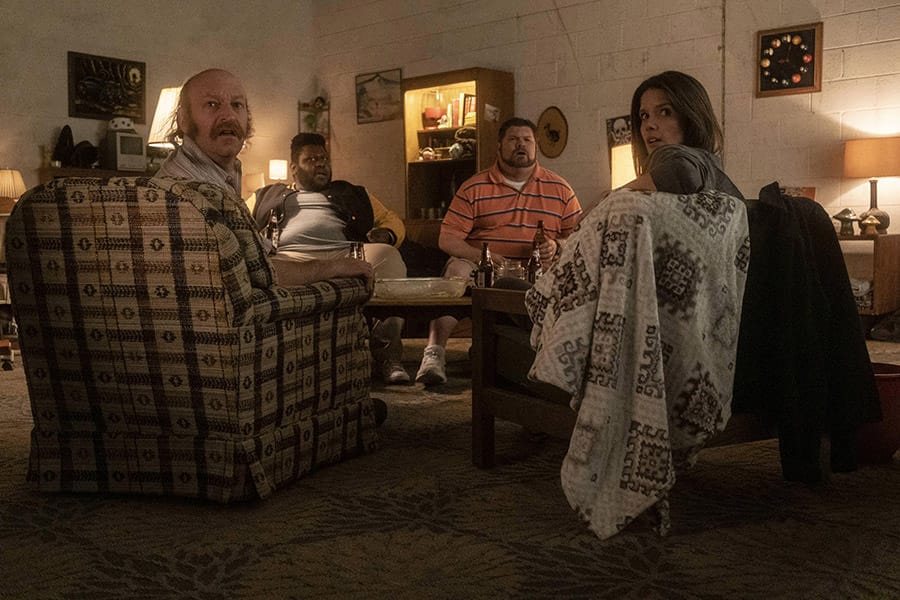 Liz opening the door to aurora borealis in a snowy wonderland was a great piece of cinematography on Lodge 49 tonight. It was a nice touch to have Liz return to join her friends with snowflakes in her hair to sell the moment. Although the piece wasn’t a major part of the episode necessarily, it cannot be understated for its aesthetic value.

Finally, Scott likely played his last move in marriage chess. He’s been delaying Connie breaking up with him, putting off ‘a talk.’ Scott sang a song from the heart in a last ditch effort to save the marriage in front of everyone. Connie was moved but the moment was ruined when Dud and Blaise fell through the ceiling onto the stage.

However, it’s not completely clear a talk means an end. Connie and Ernie discussed how things aren’t the way they used to be anymore between them on tonight’s Lodge 49. While they both smiled, it felt like that relationship might be heading to an amicable end as well. The decision starts and ends with Connie…

Check out last week’s recap of AMC’s Lodge 49 to catch up on the series!