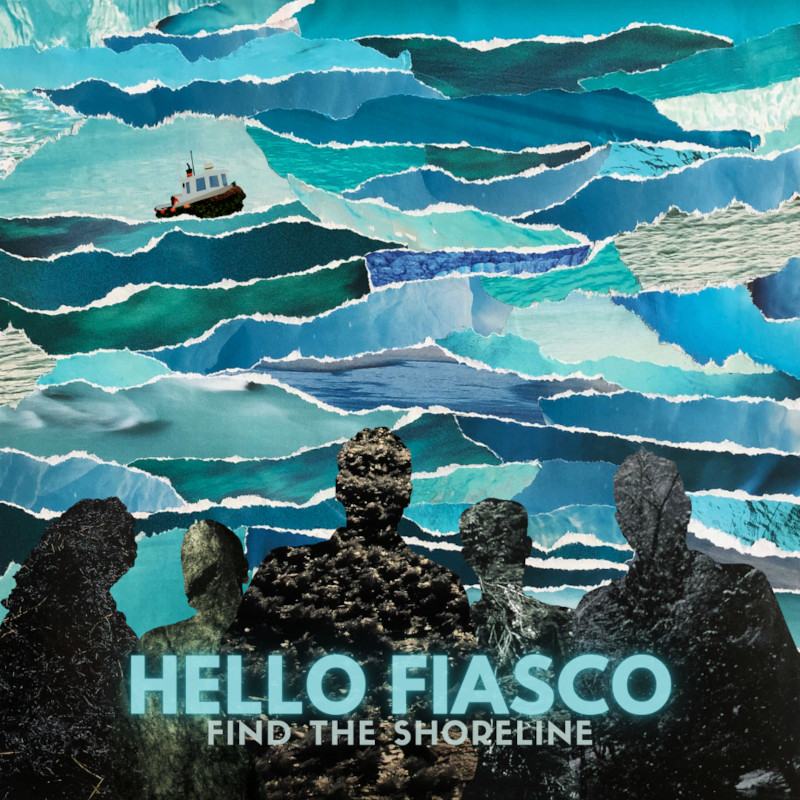 Hello Fiasco is a Canadian-American supergroup formed by former members of the popular regional band The Mailman’s Children and other top musicians from the Winnipeg scene. Although the band only recently released their debut album, the record is the product of decades of cumulative experience from veteran players and songwriters.

“Find the Shoreline” is the debut album from Hello Fiasco, available now worldwide via all major streaming services. The record’s official physical release is set for August 2022. The 12 song collection is a fun, genre-bending ride through a radio-ready world of pop hooks and rock riffs with roots spanning from the 80’s to today.

The record opens on the introspective alt-pop of “It Makes Sense.” With its Joe Jackson-esque pop/jazz class and modern dark pop lyrical themes, the track sets the stage. What follows is a set of smart and catchy tunes that pair prog rock virtuosity with universally relatable pop simplicity.

Lyrically the record navigates the complex dynamics of personal relationships (“Hold Me Close,” “One Phone Call”), contemplates the impermanence of life (“Before Time Leaves”) and examines the high anxiety of life in the 2020s (“Worried Sick”). Elsewhere, lead vocalist Eric LaBossiere slyly blurs the lines between personal and social commentary (“You Don’t Want Love”).

Throughout the album the band weaves threads of 80’s new wave, 90’s alternative and a modern genre-fluid aesthetic. They blend influences from across the decades to create their own distinct sound. There are flashes of everyone from The Cars to The Killers, but in the end it simply sounds like Hello Fiasco.

Check out the video for the song “Hold Me Close” below, or listen to the entire album on your favorite streaming service. You can also hear that track and “Worried Sick” on the Deep Indie Dive playlist. We had the chance to chat with frontman Eric LaBossiere about the new album. Read his answers to our 7 questions. And follow the links at the end of this article to connect with Hello Fiasco. Get on their socials and get in the know.

7 Questions with Eric of Hello Fiasco

Where are you from?

Although Hello Fiasco is principally Canadian, the band is actually considered Canadian-American or “North American.” I was born in Canada but I have lived in Montana on the US side for years. The rest of the band members all live in the Winnipeg, Manitoba, Canada region.

Let’s just say that crossing the border to record with the band became really difficult at the start of the Covid outbreak. We ended up recording 2 of the album’s last songs completely separate from each other in both American and Canadian studios.

How long have you been making music?

Who are the musicians involved in your project?

Who are your biggest musical influences?

A few of our bigger Rock influences include The Killers, Muse, The Strokes, Pearl Jam, Radiohead and ColdPlay.

What inspired you to create this project?

Three of us used to play in a band called “The Mailman’s Children.” We had released 4 albums together but never really got traction because we weren’t yet ready to simplify the music and produce it properly for the people who were actually listening to us.

So we changed that and decided to not only make music that we loved but that was also more commercial. In 2016, we started to form what became Hello Fiasco by writing better, working more closely with our co-producer John Paul Peters, and adding a couple of new players.

What are your plans for the future (musically)?

Is there anything else you would like to say?

We still believe in the album whereas most don’t. It’s why we built www.findtheshoreline.com … so that people could have a complete album. With the site, they can get liner notes, lyrics, credits & a complete experience.