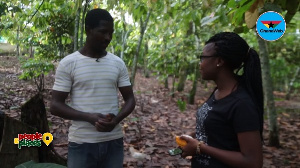 “Tetteh Quarshie swallowed Cocoa beans and pooped it out when he came to Ghana”, sounds familiar?

I’m pretty sure it is what majority of school pupils heard about the now famous cocoa farmer whose legacy has exceeded him.

What story have you heard about how cocoa came to Ghana? Not the Dutch or Basel Missionaries version, but the version about Osu-born and bred, Tetteh Quarshie.

A visit to the farm by GhanaWeb’s Wonder Hagan revealed the true history behind how the uneducated blacksmith brought cocoa back from Fernando Po.

A blacksmith’s toolbox, that’s what six cocoa pods were hidden in and shipped back into the then Gold Coast.

Considering he was on a missionary journey in Fernando Po, he was required to pass through the checkpoint, like every individual returning to their various countries, to be checked for any foreign items.

At this point, it was a decision; to get exposed or to strategically hide some six cocoa pods he had stolen from Fernando Po (now Equatorial Guinea).

Now he played his cards well, knowing the toolbox would be the last place anyone would want to dig into, he took his tools, put the cocoa pods way down in there and covered it with his very own made tools.

With that, the entire plan was cooked and it worked out perfectly. Over six weeks on the ship, he journeyed back to Gold Coast with the pods.

Even here, he went back home and tried planting the first seed in Accra. That failed though, with the soil type, mostly sandy and clayey.

Then his missionary work came in, he found good soil in Mampong Akuapem, where his Basel missionary works continued. There, he was given some acres of land by the then Mampong Chief, where he planted his very first seed and that’s where cocoa cultivation started in Gold Coast, now Ghana.

Today, the farm is still in good shape and is producing bags of cocoa for the country.

Thomas Awuku, who has been working in the farm for years told the team,

“That’s the history we also learnt about him, but when I got to this stage, I realised they were telling us a lot of lies about Tetteh Quarshie. Tetteh Quarshie didn’t swallow cocoa beans before he brought them to Ghana because in the 1870s travelling was difficult. There were no aeroplanes for travelling so we travel by the sea, either with ship or canoe. Tetteh Quarshie went with the ship, and it took him six weeks from Ghana to Fernando Po which is currently known as Equatorial Guinea.

Assuming he swallowed the cocoa beans and for six weeks on the ship, are they trying to tell us that the whole six weeks on the sea, he couldn’t visit the washroom? And if he did, it means everything went back straight into the sea so we never got back the beans and returned back to Ghana.” He said.

“So Tetteh Quarshie didn’t swallow cocoa beans, he rather came back with cocoa pods, the ripe ones, six of them, hid it in his toolbox.

He was a blacksmith and a blacksmith has got a lot of metals so there was a toolbox where all the metals were being kept. After he got it from the owner, he removed the tools and hid the cocoa in the toolbox and after arranged his tools on it and covered it.

Before you are allowed to enter the ship, they ask you where your luggage is so they can look through it. What are the things you are having in there, after opening his, they only found the working tools. The cocoa was hidden under the tools, so they couldn’t think further there was something under the tools, and that was how cocoa ended up in Ghana.”

Tetteh Quarshie’s exploits over the last century has earned Ghana some plaudits on the international front as the second-best producing cocoa in West Africa.

Let the festivities begin with Snowball Cookies and Beyond Chocolate Brownies

The History Behind Promotional Teddy Bears

Using Your Influence to Save the Planet, Save People Money and Stop Using Harmful Products

Mardi Gras Eats: Swinging the good thing in the Kitchen with Chef JP!

FIRST LOOK at the 2017 Epcot International Festival of the Holidays! (PART THREE)