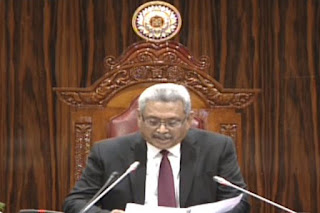 President Gotabaya Rajapaksa has called on all politicians to join his endeavors in nation building regardless of their political party differences.

He also emphasized the need for Constitutional changes to ensure the country’s security and stability.


The President made this remark addressing the 4th session of the 8th Parliament which was inaugurated this morning (03). Upon his arrival, the President was received by Speaker of Parliament Karu Jayasuriya.

President had given instructions not to carry out the traditional convoys and 21-gun-salutes in order to make the ceremony simpler.

It was reported that over 600 invitees including foreign diplomats, former presidents, prime ministers, chief justice, Supreme Court judges and the Attorney General were present at the ceremony.

The President stated that the new government prioritizes national security, adding that they have already taken steps to fortify national security. He vowed to ensure proper coordination between the Tri-forces and the Police as well as to strengthen the state intelligence services.