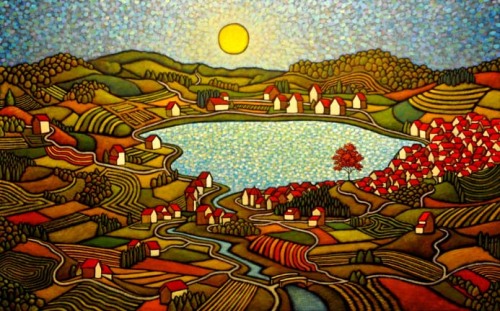 In my picture of the world there is a vast outer realm and an equally vast inner realm; between these two stands man, facing now one and now the other, and, according to temperament and disposition, taking the one for the absolute truth by denying or sacrificing the other.

Empire of Language- Prelude-Metaphors…
Sobriety In The Time of Quarantine: T…
Can CBD Be Used to Fight Coronavirus …
Can I consistently feel better?
Introducing Superior Painters® Sub-Di…

We’re looking at another decade slipping away. I originally didn’t give much thought to any way of marking this but in recent days began looking back at work from the past ten years, trying to to see if there was a single piece that summed it up for me.

That is really difficult. Even trying to choose a single Painting that sums up a single show or year is often near impossible. There are favorites, pieces that speak to me more personally than others, but they often don’t reflect the body of work as a whole. But choosing one that stands as a symbol for ten years of hard work seems out of the question.

But I tried and came up with a few that stood out as possibilities. The painting at the top, for example. It’s The Internal Landscape from 2012. It’s a large piece, 4 1/2′ by 7′, and was the titular centerpiece of my show that year at the Fenimore Art Museum in Cooperstown, NY.

It’s a painting that has meant a lot to me, as far as building a confidence in myself that my work had lasting value that might carry it into the future somehow. I had been a full-time artist for about 14 years at the point that this was painted yet I still wasn’t confident my own evaluation of my work. I felt that it was a real expression, not mere decoration. It was my inner reality and like, Jung’s words above, I often found myself torn between this inner Realm and the outer realm of the world. I knew this as a real world but I didn’t feel that I was qualified to say if this reality was enough, that it transcended what it meant for myself.

But this painting and its acceptance by the viewers of that show made me realize that my work’s effect could move beyond me.

And that was vastly important to me in doing this thing that occupies my days and nights.

Now, I can’t say this painting fully sums up the decade for me but it may come as close any other piece I might choose. It occupies a wall in my studio now and I take moments now and then to take it in. Its size makes it an embracing piece, one that makes me feel as though I am stepping into it with the warmth of the colors and shapes wrapping around me. It’s easy to spend time in front of it and let my mind wander among the fields and hills.

I don’t know that it will ever find a home outside the studio and that is fine with me. It feels like family, like a part of me now.