Mohamed Salah Is The African Player Of The Year 2017 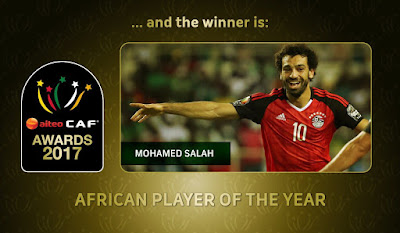 Mohamed Salah of Egypt and Liverpool has won the 2017 CAF African footballer of the year award. The winger beat off competition from club teammate Sadio Mane and Borussia Dortmund and Gabon superstar Pierre-Emerick Aubameyang.


Mane finished third in the 2016 award ceremony while Aubameyang won the prize in 2015 but finished second to Leicester City’s Riyad Mahrez last year.

Aubameyang was the top goalscorer in Bundesliga in the 2016/2017 season while Salah who moved from AS Roma to Liverpool has found a rich vein of scoring form with 17 goals in 21 Premier League appearances this year.

Salah has already been named the 2017 BBC African footballer of the year and he now adds the CAF gong to his growing list of accolades.

Mane has also been key to Liverpool’s form this season though he is yet to find his scoring boots.

Mohamed Salah Is The African Player Of The Year 2017