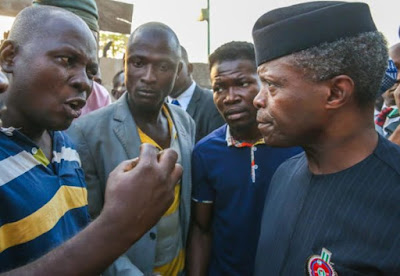 Osinbajo meets a community leader in one of the Adamawa communities
Vice President Yemi Osinbajo visited several villages and towns in Adamawa state on Tuesday affected by recent communal violence, that led to killings of people and destruction of property.

Among places visited were Numan and Dong, but Osinbajo and his team were surprised to find that Kikan, another community affected had been deserted by its residents.

Since the visit was designed to condole the victims of the clashes and offer government’s assurances of safeguarding them against future violence, the delegation, therefore, asked for a follow-up meeting with the community’s leadership at the earliest opportunity.


Osinbajo at every place visited urged those in leadership positions in the country to lead the people out of the cycle of violence into prosperity and development. The clashes claimed scores of lives and injured many others, as the attackers destroyed houses in the affected villages.

The Vice President, who visited the affected communities in the state on behalf of President Muhammadu Buhari, emphasised that it was the responsibility of all categories of leadership to solve problems and offer prosperity to the people.

“Our country is at a point in its history where we all need to join hands to make sure that all we are concerned with is to provide food, shelter, good livelihood for our people; that is our primary aim now. This is the time to come together to make progress as a people.

There is no reason why we should allow so much poverty, and what we are doing is fighting, killing each other. Our role should be to provide security, to provide resources for people so that everyone can enjoy their lives as citizens of this country. 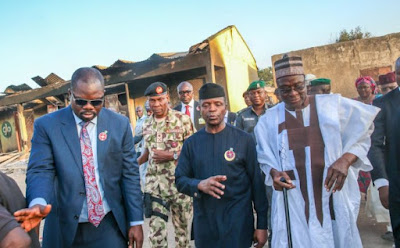 Osinbajo visits Adamawa town ravaged by communal violence
“Nobody can benefit from killing or the loss of lives. Everyone who is a leader, if all that we are thinking about is, “something has gone wrong, let us just wait until another thing happens”, then we are not true leaders; that’s not leadership.

Anybody can fight, anybody can kill; only true leaders can bring people together and make progress. Anybody who says, “I am a leader”, but is just encouraging continuous fighting, and cannot find a solution, has lost the right to leadership. As leaders, our duty is to lead the people towards prosperity and development. That is the kind of leadership we must provide. If we don’t provide that, then we have lost our rights to be leaders.”

The Vice President condoled with victims of the attacks and assured them of the Federal Government’s resolve to ensure that perpetrators of violence are dealt with according to law.

He further said the Federal Government would find a lasting solution to the crisis, and called on all parties to embrace peace and dialogue.

“It is a very sad occasion, and I’m here at the behest of Mr President first to commiserate with the people of Adamawa State and to express sincere condolences to the families who have lost their lives, and to those who have lost their homes, their property and means of livelihood. We are here to seek definite and permanent solution to the problems that have arisen here,” Prof. Osinbajo said. 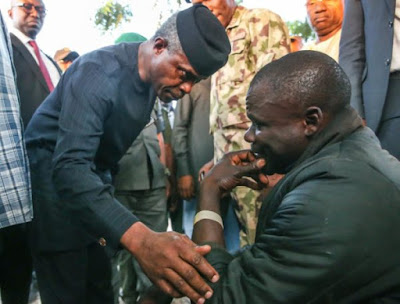 Osinbajo consoles one of the victims of the violence
The Vice President was received on arrival at the Yola airport by Adamawa State Governor Jubrilla Bindow.