Is Greece on your bucket list? Dreaming of the Aegean Isles, but don’t know which islands to see or the best way to see them?  Greece has over 2,000 islands, yet only 200 are inhabited. The best way to grab the most for your hard-earned travel dollars is island hopping aboard a cruise and getting an authentic Greek experience at every knot.

Put Celestyal Cruises on your GPS 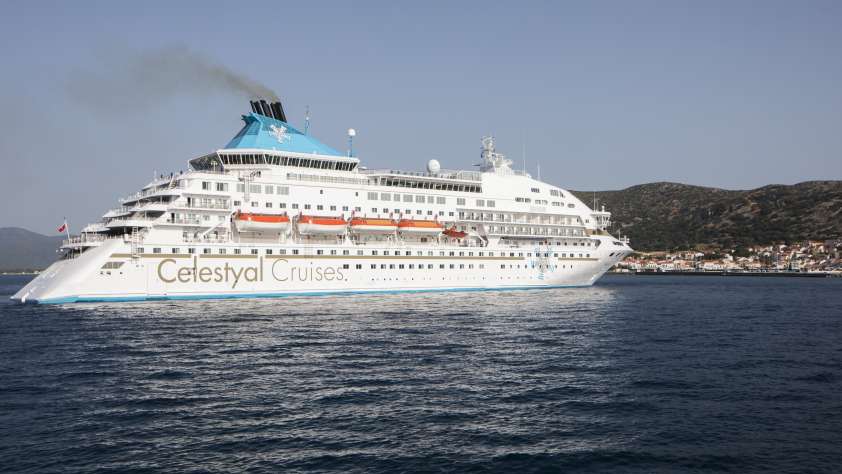 The Hellenic people are proud of their centuries-old heritage and contributions to the world in art, theatre, philosophy, and democracy. But don’t just go on one of the bigger ships and hope for the best. I recommend going with a cruise line that truly captures the very essence of the Greece experience.

Celestyal Cruises creates a deeper, richer more immersive cruise. They believe in the Greek philosophy of “Kefi” – joyful, spirited with a love of life and infuse this into every aspect of your sail. Celestyal Cruises knows the destinations and offers an outstanding experience. For shorter trips, try the Olympia which offers 3 and 4-day cruises, stopping at two islands each day. Many cruisers opt for repeated trips on this itinerary because it gives them a chance to “do Greece” at a great price. The Crystal offers 7-day cruises across three continents, giving you more in-depth travel. 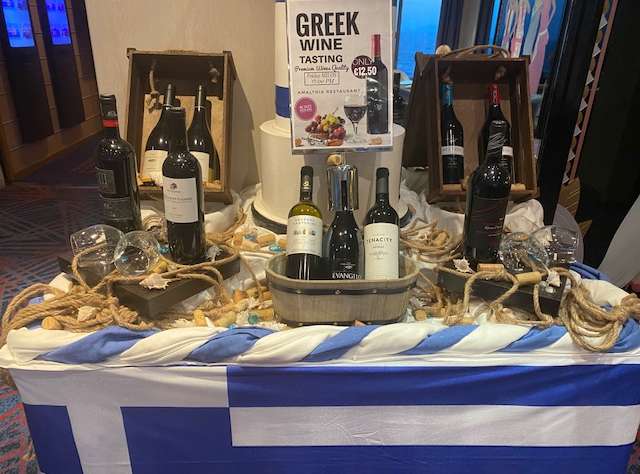 Sample wine, fruit and cheese from the islands at the Greek Wine Tasting event. Photo by Mira Temkin.

I sailed on the Celestyal Crystal, which included deluxe accommodations, on-board-dining, live entertainment, plus two complimentary shore excursions. Even port charges/gratuities were included, saving you time, money, and the hassle of doing all the planning.

My Seven-Night Cruise started and ended in Piraeus (Athens), followed by port stops in Thessaloniki, Kusadasi, Crete, Rhodes, Santorini, Crete, Mykonos, and Milos. Board in Thessaloniki or Kusadasi, if you want.

I opted for a suite and discovered lots of room, closets, and places to store our stuff. The suite offered other perks, too, like the private dining room for breakfast and lunch. We chilled out with fresh fruit, aperitifs, and petit fours brought to our stateroom throughout the day, so we could enjoy a private moment.

You’ll appreciate their other dining options, both casual and formal. Meet your fellow passengers from across the globe in the Amalthia Restaurant. 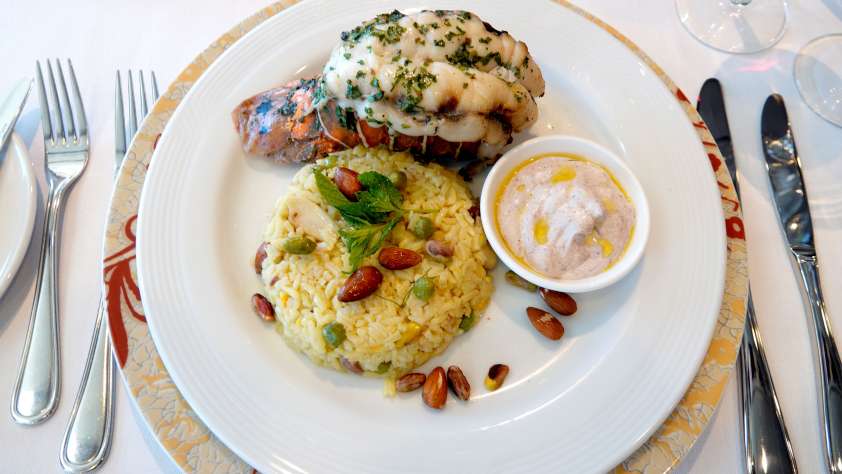 During the day, listen to the musicians on deck playing lively Greek tunes.  At night, it’s show time, from the music of Abba, Odyssea, and Broadway to a celebration of Ancient Greece and more. Nightlife aboard the ship goes late with the Helios Bar, Eros Lounge, Horizons Bar, and Disco open til 1 a.m.

If you want to dine like a Greek god, Celestyal has partnered with Greek culinary expert, Diana Kochilas, author of 18 cookbooks and creator/host of the “My Greek Table” TV show for The Greek Table Experience. Available on both ships, this optional dinner features an elegant, six-course feast with wine pairings featuring outstanding Greek cuisine. Their epic Greek Village Cheese Platter is to die for. 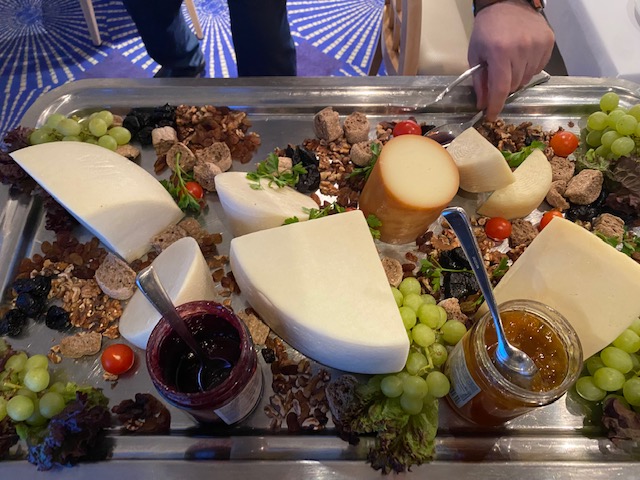 An awesome Cheese Plate awaits you at the Greek Table Experience. Photo by Mira Temkin.

I spoke with the head chef who explained to me that the Mediterranean diet features fresh, simple, healthy cuisine. They use olive oil, lemon, and other citrus fruits for flavor. If you’re vegan, you’ll find lots of delicious options.

I was told before I cruised that each of the islands is different with its history, identity, and handicrafts. If you see something you like on a Greek Island, buy it. Chances are you won’t see it anywhere else.

Thessaloniki Blends the Old and New 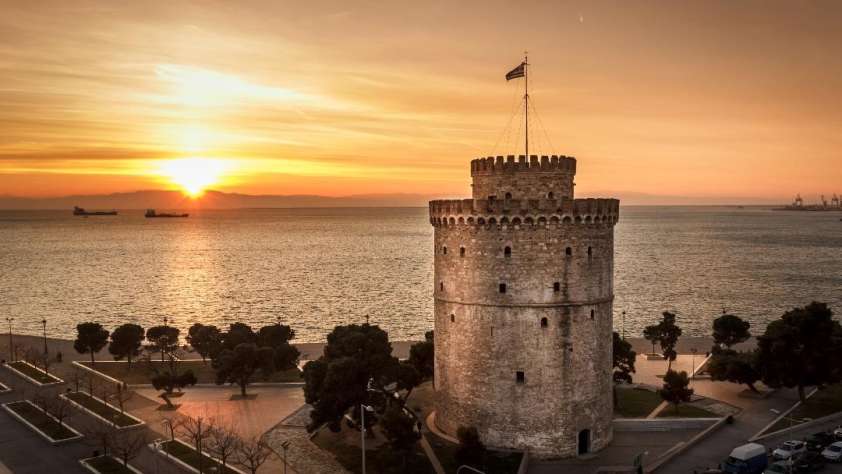 Our first stop was Thessaloniki, the second largest city in Greece, filled with Byzantine, Roman, and Ottoman relics.  We visited the  White Tower on the Aegean Sea, the iconic symbol of the island. Near it is a statue of Alexander the Great, the Macedonian leader who ruled in 336 BCE. We loved the hustle and bustle of Aristotle Square with its open-air cafes, lovely boutiques, and grand hotels, highlighted by exquisite views of the sea. 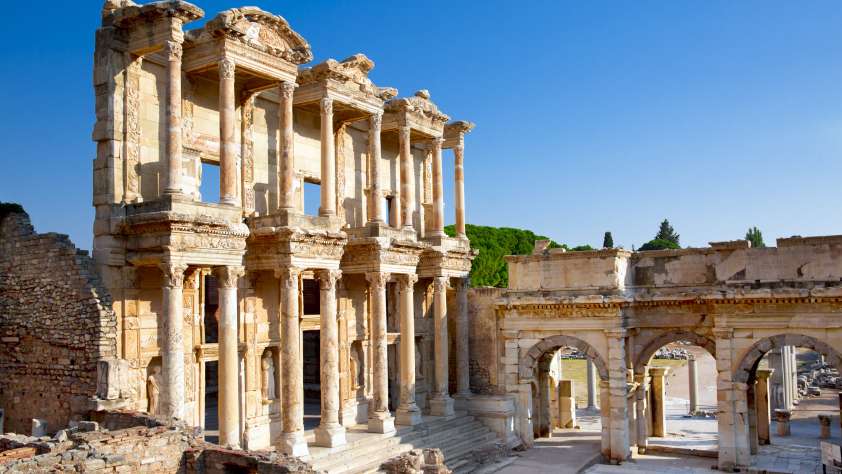 The ancient city of Ephesus. Photo courtesy of Celestyal Cruises. 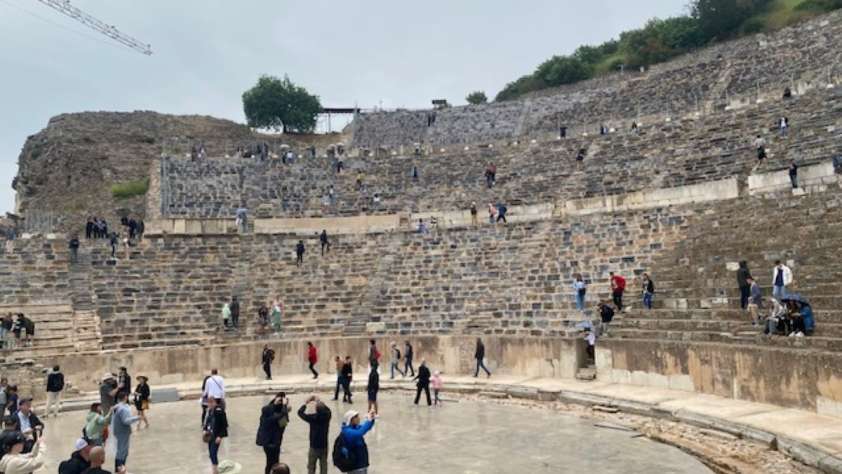 Kusadasi, Turkey was the next port, highlighted by the ruins of Ancient Ephesus from the third century, BCE. We walked through these amazing streets and admired the remarkable condition of the relics. Our guide told us the multi-story Library of Celsus actually stored 12,000 Scrolls of parchment scrolls, made with calfskin.  We imagined the roaring crowds at the Great Theatre which held 24,000. 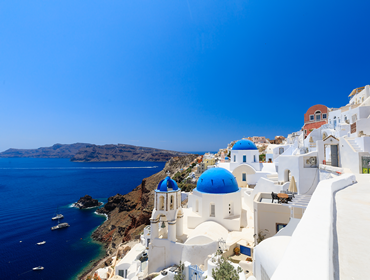 Skies and seas of blue in Santorini. Photo courtesy of Celestyal Cruises.

You’ve probably seen pictures of Santorini with its whitewashed houses set against sky blue doors and domes. They’re probably from Oia, a city made from the caldera and volcanic ash. Explore the marble stairs and hidden alleyways, all set against the turquoise waters. Take in the spectacular sunset. 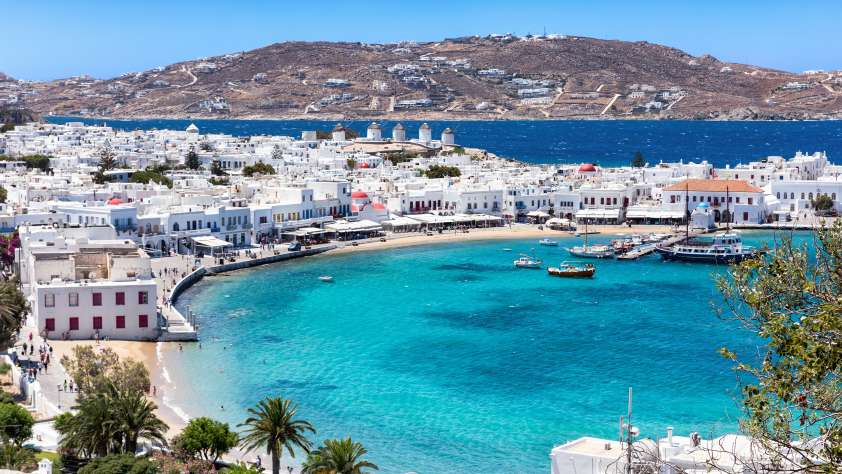 Mykonos is known as the “Island of the Winds,” where you’ll enjoy the gentle breezes on a hot day. You’ll love ducking into the alleyways and getting lost in the maze of streets. It’s also a party city where the nightlife pulsates until the wee hours of the morn in  bars and clubs. Opa! 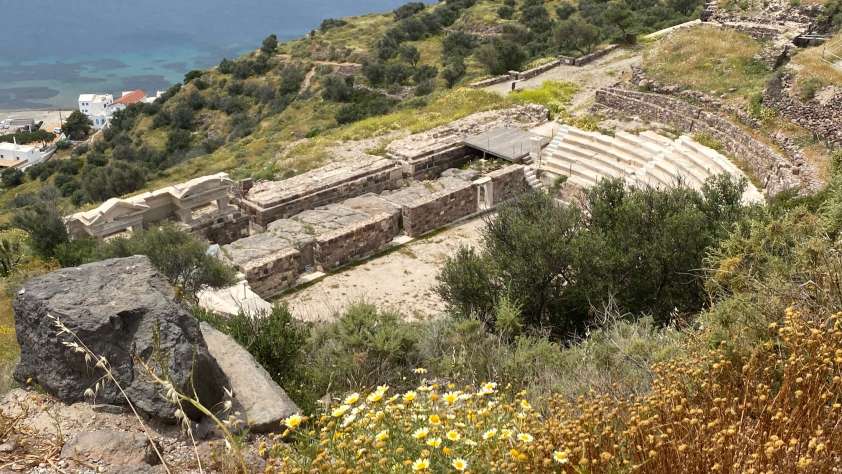 Sarakiniko Beach has pure white stone sculpted by volcanic eruptions with an almost other-worldly sense to it. You’ll think you’re walking on the moon. Check out the ancient Roman amphitheater where the armless wonder, Venus de Milos was discovered in 1820. Experts believe this ancient Greek sculpture was created between 150 and 125 BC and depicts Aphrodite the Greek goddess of love. Find her in the Louvre in Paris.

Athens – The Acropolis and Parthenon 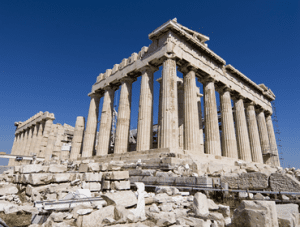 Perched high, almost above the clouds, stands the Acropolis, a symbol of the once mighty Greek Empire, built around the 5th century, BCE. Imagine living among all of this splendor and history in your daily life? On this historical hill stands the renowned Parthenon, dedicated to the goddess, Athena, the city’s protector. Walk through the well-preserved ruins and see the Temple of Athena Nike, gorgeous iconic columns, and splendid temples. Be sure to check out the Acropolis Museum next door with its see-through glass floors and stand in awe of the structures below.

People asked me about COVID protocols aboard the Crystal. A negative COVID test is required before you board the boat, masks were required throughout the ship, and I felt protected.

Loaded down with baklava, olive oil, and Greek coffee for gifts, our Celestyal cruise soon came to an end. Etched in our minds were thousands of years of ancient history, coupled with a newfound appreciation for Greek cuisine. We can’t wait to sail with Celestyal again!

Celestyal is planning to expand with new routes and new itineraries for 2023. For more information, call +1 (877) 784-2648 or visit celestyalcruises.com

The post Loving the Greek Islands aboard Celestyal Crystal appeared first on UrbanMatter.