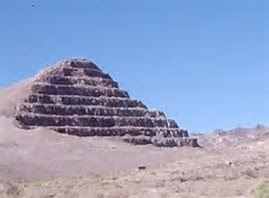 We were taught in school, America was discovered by Christopher Columbus in 1492. Columbus sailed out commanding three ships the Santa Maria, the Pinta, and the Nina. Christopher Columbus then returned to Spain caring gold, spices, and Indians captives in March 1493 he was the first European to explore the Americas since the Vikings in the 10th century. Then we were taught to believe that civilized life began in North America when the Europeans landed at Plymouth Rock around 1620. Well what if this all was a smoke screen and North Americas History could have been settled as far back as 12,000 years ago. In the Grand Canyon in Arizona the seventh wonder of the world Egyptian Mummy’s, Pyramids, with gold artifacts were found.  Fact in in 1909 G.E. Kinkaid and Professor S.A. Jordan explored and discovered a great underground cave with several passageways as long as a mile. They found ancient sharp-edge copper instruments and hundreds of mummies stacked a dozen high a radiocarbon date of 2145 B.C. was established. In the 1909 Gazette interview, Kinkaid told the editors that, when they arrived in Yuma after the discovery, he'd shipped a number of relics to the Smithsonian Institution in Washington, D.C., for evaluation. 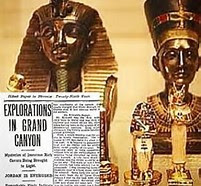 Fact, looking upon a topographical map of the Grand Canyon you will notice some rock formations have Egyptian names like, Tower of Ra, Horus Temple, Osiris Temple and Isis Temple. In the Haunted Canyon area, names like Cheops Pyramid, Manu Temple and Shiva Temple. The National Park Service declares the Grand Canyon a forbidden zone no one may enter without a permit but none have ever been approved.

Cover up or no cover up I leave you to decide but a discovery of this magnitude should be listed next to the Pyramids in Giza Egypt that is also considered one of the wonders of the World.

This is a Web Page with items found in the Grand Canyon.

My First, The Crossroads of the Rock n Roll Highway