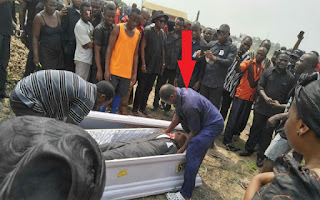 The now infamous Mortuary man at the Tema General Hospital who stormed Community 9 Cemetery on Saturday February 11, 2016 to seize a dead body over an unpaid debt of GH ¢40 owed by the deceased family, has been sacked by management of the hospital.

4 Things You Should Know Before You M…
Interview Q&A: Chris Malgrain from On…
All I need is a couple of days off
Where Songs Come From: Boy Gone Bad (…
Top 10 Dirtiest Jobs In The World
Sources at the Hospital tell, Kasapafmonline.com that the mortuary man was dismissed on Tuesday after an emergency meeting held by the authorities.
They hold the view that the bizzare incident that has drawn the hospital’s name into the mud.
The mortuary man in the company of his friend shocked mourners who had gathered at the Cemetery to bury their dead when he suddenly stormed the grave yard and seized the coffin, opened it, picked out the dressed Corpse and started heading back to the mortuary, claiming he’ll only release the body when he’s paid an amount of GH ¢40 owed him.
The family of the deceased are said to have refused to pay the balance to the mortuary man after he dressed their corpse, but managed to smuggle the body at the blind side of him while he was busy attending to other corpses.
Kasapafmonline.com sources say the hospital authorities consider the mortuary man’s conduct as reprehensible hence exacted the punitive measure against him.