Nowadays, Epoxy is a popular resin used all over the world.

Its strength as an adhesive can easily outmatch other common glues in the market.

For those of you who are not familiar with this resin, I will shortly define some key features of it.

This is how it actually looks like when using SEM microscope. 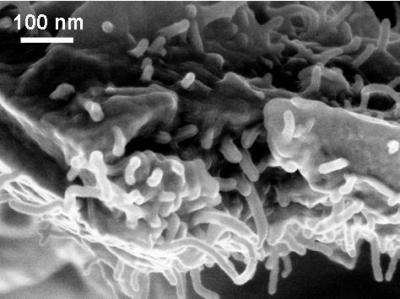 The chemical formula is skethced below,

The word Epoxy can be traced back to two Greek prefixes “epi” and “oxy”.

Epi means “upon” while the prefix oxy means sharp or acidic.

epoxy
ɪˈpɒksi,ɛˈpɒksi/ noun
noun: epoxy resin
an adhesive, plastic, or other material made from a class of synthetic thermosetting polymers containing epoxide groups.

Various chemical reactions of epoxide, the resin, and polyamine, the hardener can produce epoxy resin.

The wide range of usage of this strong adhesive includes carpentry jobs, flooring, electronic boards and so on.

There are some uses in DIY garage coating.

Its adhesive-ability has been tested and witnessed by millions of people throughout its 100+ years of existence.

So without further ado, let’s dive into the depth of history.

Epoxies have been around during the early 1890s, but it was only popularized during the mid 1950s.

A Russian chemist named Prileschajev was first to observe that olefins would react with a peroxybenzoic acid.

This reaction formed epoxides which are used to form epoxy along with polyamine.

During the mid-1930’s, a German named P. Shalack was granted a patent in which he prepared a polyamine with a high molecular weight.

Shalack did this through using of epoxide compounds which contained an epoxide group greater than one.

The first epoxy as we know it today, though, was synthesized in the year 1936.

Dr. Pierre Castan, from Switzerland, and Dr. S.O. Greenlee, from the USA, both recognized the chemistry of epoxy that people use today.

Both of them also shared the credit of developing Diglycidyl ether of Bisphenol A.

Dr. Pierre Castan allowed his work to be licensed by company named Ciba in Switzerland.

Thus, Ciba became the first company to commercialize the production of epoxy resin in the year 1946.

Dr. S.O. Greenlee on the other hand had an agreement with an America based firm named Devoe-Reynolds.

This firm was then sold to a company called Shell Chemicals which changed its name to Momentive Specialty Chemicals.

Aerospace was the first commercial field that epoxies could penetrate to in early 1950.

However, it was discovered to be extremely useful in other niches as well.

It took well over than two decades for epoxy resin to get the exposure it needed.

Obviously, many had first questioned the product which resulted into most of its commercial failures.

The lack of knowledge also managed to do the same thing as well.

The present epoxy today has its own formulation but was based on the work of Prileschajev.

Thanks to the studies of Dr. Pierre Castan and Dr. S.O. Greenlee, epoxy has further evolved and became what it is now.

The companies also did their part in commercializing epoxy.

Though it may be difficult to explain what epoxy is during those times, they still pushed hard and had successfully introduced a new product that revolutionized the market.

The use of Epoxy is still very eminent today and it will be still used in the coming years.

Each person had its own role in epoxy and its history.

The scientific minds and entrepreneurs have worked together to make Epoxy one of the greatest adhesives around today.

Epoxy resin has come a long a way.

However, there are breakthroughs in this field which keeps epoxies compatible with other solutions.

Three major innovations that have led to the evolution of the global epoxy resins market in recent years include the following;

Nan Ya Plastics owns the patent for epoxy resin varnish for laminates.

This composition has a high glass transition temperature due to increase in cross-linking density of the resin.

This will inevitably lead to improved mechanical strength and heat resistance.

This innovation is especially groundbreaking, as it offers low water absorption and excellent heat resistance to electrical laminates; even fire retardant requirements are fulfilled at low costs.

Taking the curing process to the next level, this epoxy resin composition enhances thermal, mechanical and chemical properties.

Therefore, it is highly useful in the manufacturing of composite parts by vendors.

Air Products and Chemicals Inc. owns the patent for this composition.

Owned by Dow Global Technologies, this process is solvent-free and involves the preparation of stable aqueous epoxy resin dispersions using polyvinyl alcohol as a primary dispersant.

Properties like low VOC content and low viscosity, which are highly desirable in the coatings industry, are also inherent in this epoxy resin composition.

According to analysts at Technavio, it is the wind energy market that has contributed to the expansion of the global epoxy resins market in 2015.

As epoxies are stable, lightweight and flexible in nature, they are used in manufacturing wind turbine blades.

Likewise, due to these properties, the chemical has applications in shipbuilding and the maintenance industries as well.

One major impediment that suppliers of epoxy resins have to face is adherence to regulations.

Some of the major regulatory frameworks for this industry include OSHA Hazard Communication Standard, REACH, and VOC emissions standards, as well as several transportation regulations.

The epoxy resin has been developed in the course of past century. But it has proven that still it has the capacity to stays among the top resins for commercial purposes.

Epoxies as they are today innovated by Dr. Castan.

Then they were commercialised within the next 20 years.

I am definitely missing out a lot as I am trying to compress 100 years in 1000 words!

So please mention what you think is missing here in the comment section below.

Thank you so much for your attention, and have a good one.