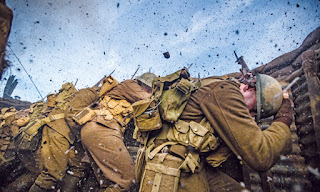 The horror and  senselessness of trench warfare on the Western Front during World War 1 is brought into very dark focus by the evocative British Film Journey's End. Based on the stage play of the same title by R.C. Sherriff, the story is centred on a small part of the Front where a company of British infantry are positioned in trenches just metres from the German Army lines. It is the eve of the 1918 Spring Offensive by the Germans and the British are all too aware that a major action is impending.
The futility of their position is already well understood as the troops have been in combat for years and there is a sense of resignation to fate as they alternate between rest periods in the rear areas before rotation back to the front line. Much of the scenes are in the company command bunker with the focus predominantly centred on the officers as the key characters.  The story commences with the arrival of young second Lieutenant Raleigh, fresh from officer training, to join the infantry company as his old school friend and love interest of his sister is the company commander, Captain Stanhope.  After years of horrifying war, Stanhope is no longer the man he once was, and now needs whisky every day to stay sane.
Directed by Saul Dibb this is a well crafted film with skilled performances by Sam Claflin (as company commander, Captain Stanhope), Asa Butterfield (as Second Lieutenant Raleigh), Paul Bettany (as Lieutenant Osborne) Tom Sturridge (as Second Lieutenant Hibbert) and Toby Jones (as Private Mason, the officer's mess cook and batman).

Robert Cedric Sherriff wrote from first hand experience of World War 1 as he served as a Captain in the 9th Battalion of the East Surrey Regiment and fought at Vimy Ridge, Loos and the notorious Passchendaele being wounded in the last engagement.

This is a film which has no happy ending but conveys a story which continues to resonate 100 years later.