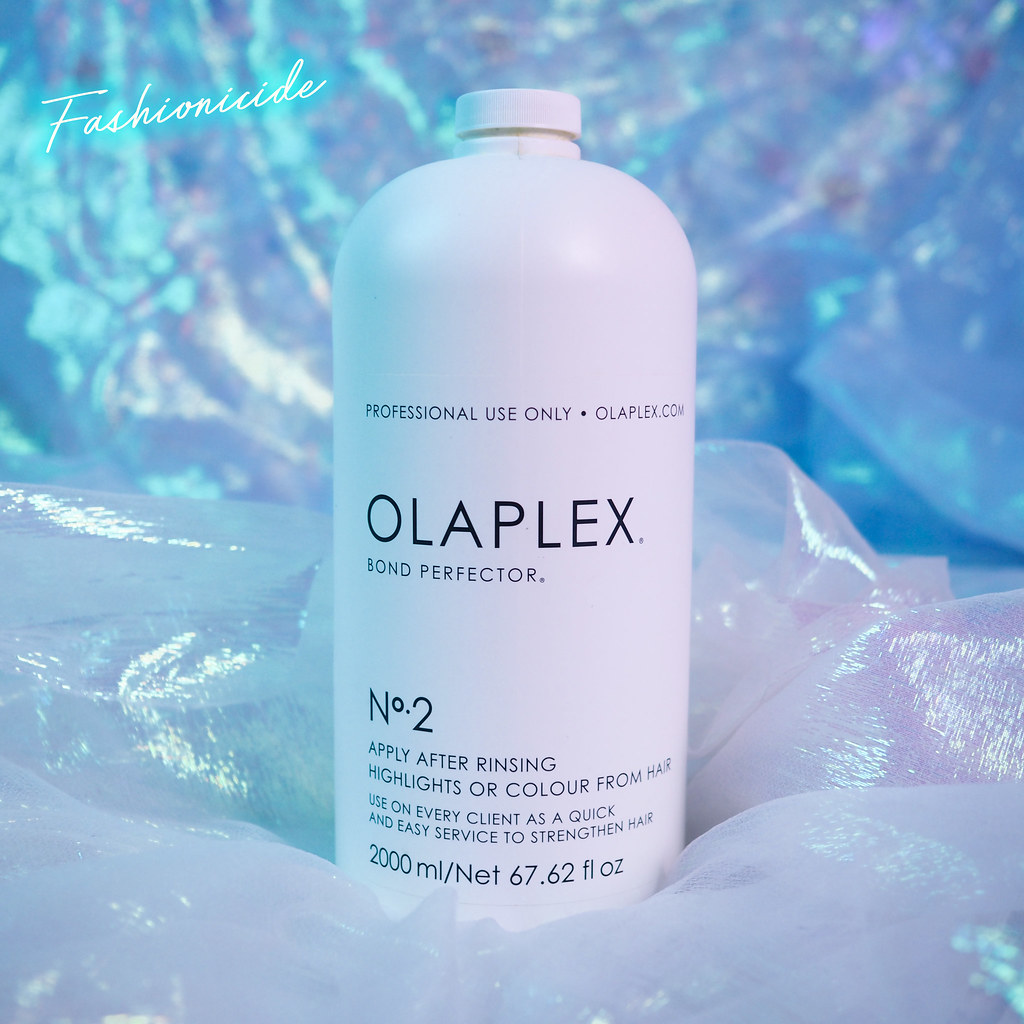 As you may already know, I'm a huge fan of Olaplex. It's one of those, dare I say it, once in a generation products that comes along and doesn't just change the game, it tears up the rulebook and writes brand new ones all of its own. And let's be honest, nobody's gonna stop it either. Without it, I actually think that my white blonde locks would have sunk down the plughole a long, long time ago.

Shen Men Piercing: Does it work for A…
Why a CryptoPunks Owner Turned Down $…
Easy Pet Rocks Craft Idea For Kids
Fantaspoa 2021: Bloodshot Heart film …
How To Get Rid of Ticks in the Yard –…
I wrote a post in 2016 that seems like an age ago now, where I first delved into the world of Olaplex. I used the No 1 and No 2 in combination as a Hair treatment, and without doubt it strengthened my hair. I wanted to get a bit of a feel for it, to see if it really stood up to the hype, and it did, before I took that brave step into the unknown and used it as part of my bleaching routine - that post is **here** if you're curious.
Let me tell you something though, because it might sound a bit strange, but going blonde is not easy whatsoever, and it's certainly much more difficult than just bleaching the hair and colouring it in a fashion colour like pink or blue. Oh no. Applying a colour over your freshly bleached locks largely drowns out any unevenness within the bleaching process. But when you go blonde, there's nothing to cover it at all. It's there for all to see.
Of course you can tone it out to stop it from being so noticeable, but toner tends to contain peroxide, which is damaging to the hair and it's already not on speaking terms with you after treating it so badly with the bleaching. However, bringing Olaplex No 1 and No 2 into the toning routine leaves my hair still firmly intact with much less breakage than you may anticipate.
The biggest issue with Olaplex is that No 1 and No 2 are salon treatments, and they're a bit iffy about selling it to people who are not 'trained' in how to use it. They maintain that it's for professional use only, whereas No 3 is targeted at the consumer market, but what is life if you always follow the rules?
To be fair though, the No 3 is pretty good as a standalone product. I tended to use it as a weekly treatment, and it did my hair a world of good, but the bottle is tiny, it runs out far too quickly and it just ain't cheap either.
So instead, I've turned to the No 2, and started to use that as a weekly treatment. I know, you're thinking "Well that makes no sense, how can the professional product be cheaper than the consumer one?" - well it isn't, but it does come in bigger bottles, which makes it much more economical. Particularly if you shell out for the.. gulp.. 2 litre bottle! I managed to get myself a deal on Amazon, and it's saved my hair and my life, whilst also proving to be cost effective.
Of course, Olaplex are very quick to point out that if you don't buy it direct from them, you run the risk of buying fakes or duplicates (quelle surprise!) that are apparently prevalent on the likes of eBay and Amazon. For the sake of my hair, my life, and my readers, I was prepared to be the hero and take that risk - it worked!
By way of comparison, Olaplex No 2 is a little more concentrated than the No 3. One way to think of it is by looking at Philip Kingsley's Elasticiser and the Elasticiser EXTREME! No 2 is like No 3, on steroids!
So upon receiving the huge, fuck off sized bottle of No 2, I pretty much instantly went upstairs and started applying it to my damp hair. The formula is creamy, yet runny too, so make sure you get the pump, because one second you'll be there trying to take out a small amount and the next your hands will be covered in it! 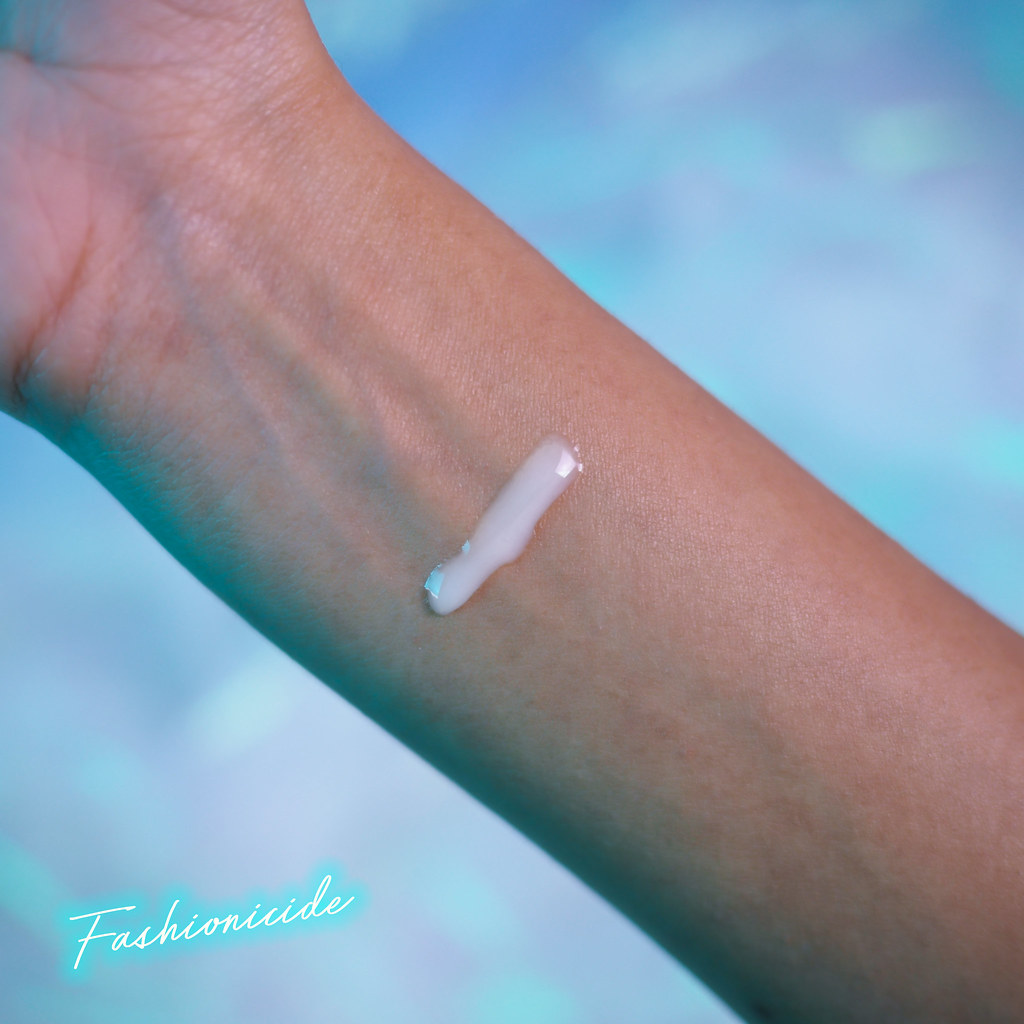 Olaplex No2 Swatched on my wrist, because why not?
To apply, you slather it all over damp hair, perhaps in the shower, and comb it through. Now, my wet hair is usually a nightmare to comb through and detangle, but the Olaplex takes immediate effect and all of a sudden the comb runs through my hair like a hot knife through butter. The thing is, whether you've got No 1, No 2 or No 3 in your hair, I've found that detangling is a breeze. Normally I'd need to go crazy with the detangling spray, but not with Olaplex.
Don't rinse out the No 2 though, leave it in overnight, maybe wear something like a turban or comfy shower cap over your hair to protect your precious bedsheets and pillows whilst you sleep. Personally I wrap my hair in cling film first, then cover it with a turban. Next morning, rinse it off then shampoo and condition as you usually would. What is certainly not usual is just how silky smooth your hair will feel afterwards - for my bleached hair, this is nothing short of miraculous. Without Olaplex in my hair, I'd feel the dryness after shampooing, but with the Olaplex, it feels swishy af.
After getting out of the shower, detangling my hair is effortless again. I have to say, the first time I used this I genuinely had to test to see if I was awake, because it felt so unreal. But if you think it's good by this point, just wait till you blow-dry. If, like me, your hair has been lifted from a dark natural colour to something much, much lighter, you'll be familiar with damaged, dry, generally rough feeling hair, but now, after you've blow-dried it, it feels silky, it feels smooth, it feels like... real hair. It feels like it's been repaired.
And you think it feels good now? Wait 'til you get outside! Out and about, my hair flies in the wind, like I'm a walking, talking hair advert. My hair is reacting to the breeze, it's being flexible, you can feel the air flowing through it, natural as anything - and it doesn't feel stiff! Maybe the best way to describe it is when I first saw Monsters Inc, and the way Pixar animated Sulley's fur, it just dances around as he moves and with the breeze and looks so real, but this is your hair, and it really is real!
But of course, the question on your mind when your bleached hair feels this good, is "How long is this gonna last for though?" - because we've all had so many false dawns, so many wonder products that promised so much, yet ultimately papered over the cracks at best. To me, it feels like Olaplex isn't just papering over the cracks though, it feels like it's genuinely bonded the cracks back together again. As you know though, our hair suffers through all manner of environmental and self-inflicted factors: the sun, the wind, blow drying, curling, straightening etc which all cause damage.
So what Olaplex does, feels permanent to me, but because of those factors constantly attacking your hair, you'll probably need to use No 2 every week or two to help it fend off the various attacks it faces and keep it in tip top condition. The great thing is though, my hair feels better and better with every use, so it's not merely maintenance, it's actually improving your hair.
I just want to jump back a bit here, because I mentioned about wrapping my hair in cling film a bit earlier and think I probably ought to say why! I find that once the hair is dry with the product in, it tends to stop working, so the cling film keeps the hair moist and allows the product more time to work it's genius on your hair. As ever with hair treatment masks, they say the longer you leave it on, the better it works, and this principle is also true with Olaplex. If you're hard pressed for time though, I'd say to leave it on for at least 30 minutes for it to have any kind of meaningful effect.
Unfortunately, it doesn't come with a pump by default, but I'd highly recommend purchasing the Olaplex pump along with it anyway so you have more control over how much you take out, and make  your product last that much longer. You can get a 525ml bottle for £44.98 from Amazon **HERE** or, if you're feeling brave, you can get the 2000ml **HERE** for £77.53.