I’ve mentioned Vultr in several of my previous blog posts. I’ve covered how Vultr significantly outperforms their main competitor DigitalOcean in both price and performance in the low cost solid state drive (SSD) virtual private Server (VPS) hosting market. Today I thought that I would do a walk-through of Vultr via a series of annotated screenshots. Along the way I hope to show you why I’ve moved away from DigitalOcean for all of my new development servers and why Vultr is currently one of my favorite VPS hosting option.

So let’s get started with the homepage where creating a new account is as simple as entering our email address and password form the home page.

After clicking on the “deploy now” button you’ll need to enter your payment details. Services are billed based on an hourly rate up to a maximum monthly rate. with servers starting at $5.00 a month or $0.007 (7/10 of a penny) per hour for a VPS with 1 CPU 768MB memory 15GB storage 1000 GB of monthly transfer. The minimum deposit is $5 but it also comes with a $5 bonus credit that it automatically added to your account. 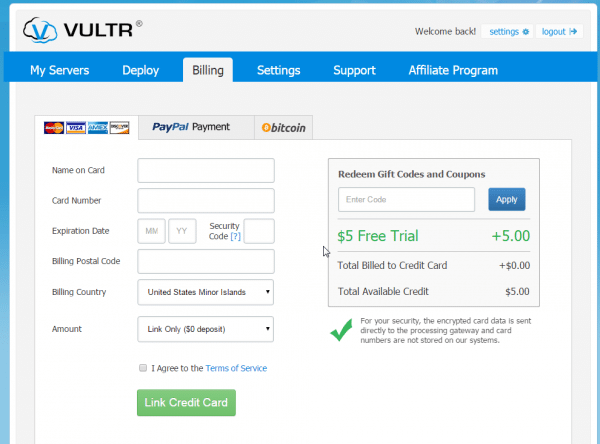 Payment can be made via credit card, (visa, MasterCard, AMEX or Discover) PayPal or even bit coin.

After entering your preferred payment option you can now get started deploying your first virtual server.

There’s a lot to talk about on this next screenshot.

First off there are three different server types to choose from :

Performance – Have from 1 to 4 CPU, SSD storage and are available at data centers located around the world.

Storage – Have either 1 or 2 CPU large SATA disks and are available in New Jersey or Los Angles data centers.

Multi-Core – Have between 8 and 20 Cpu Ssd Storage and are only available in the New Jersey data center.

They have many different OS choices, including verities of Linux, BSD and Windows available and unlike the vast majority of other VPS hosts Vultr also allows for the installation of custom ISO’s. They also have a few applications which can be installed when deploying a new server. I’ll cover the applications latter on.

By default the following OS options are available.

The following optional features are also available IPV6, Private Network and Auto Backup at an additional 20% above the price of the VPS. Auto backup isn’t available on the storage series of VPS. 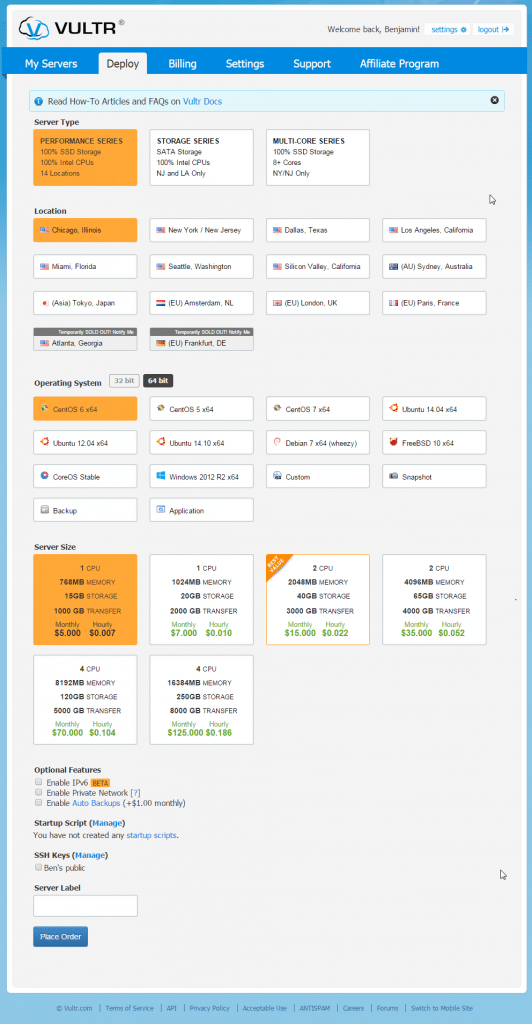 In the next image we have the storage series VPS options. 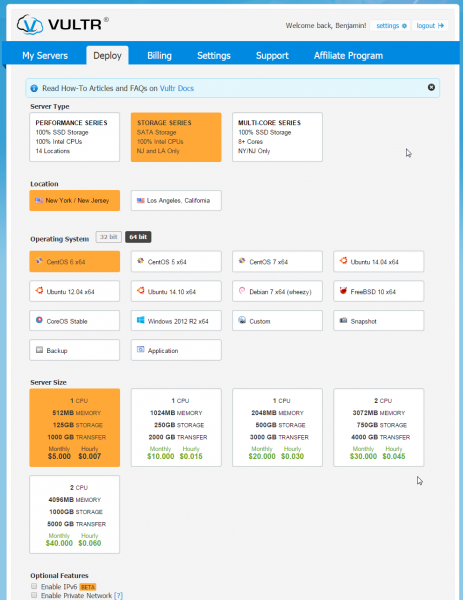 At the time I took the next screen shot the Multi-Core series was sold out. 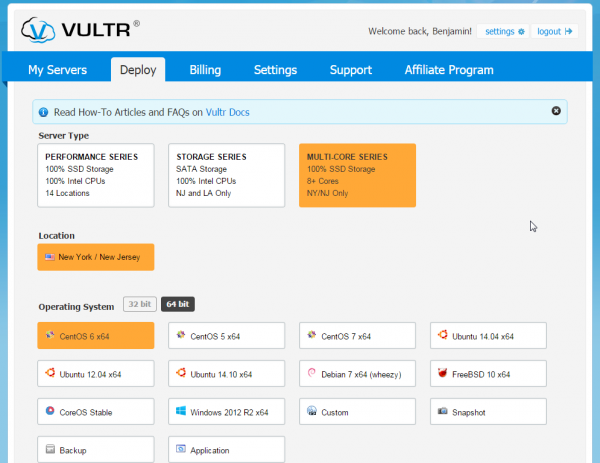 In the next image we show the custom OS installation options. 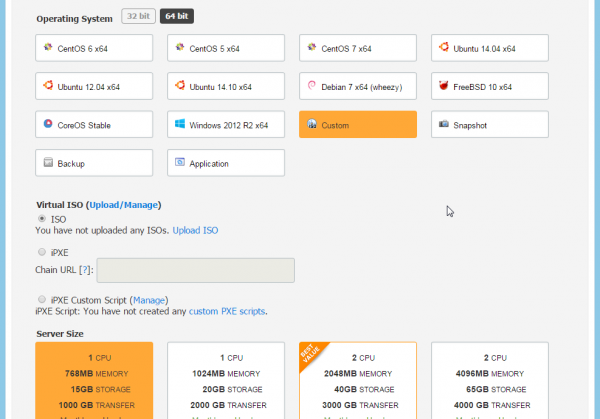 You can also deploy a new VPS from a snapshot of one of your current VPS. If I had taken any snapshots they would have been listed here.

when deploying you can optionally set up a start up script which will run the immediately after install. 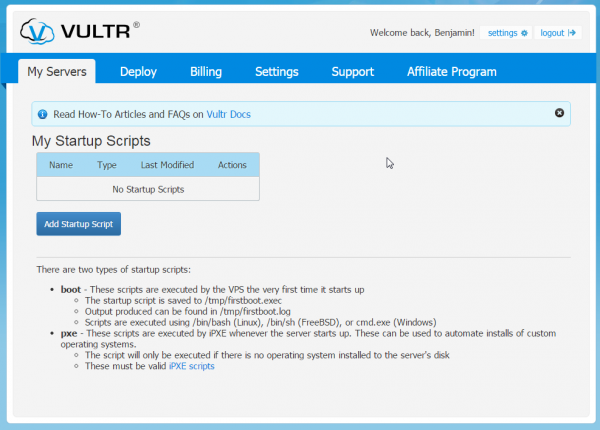 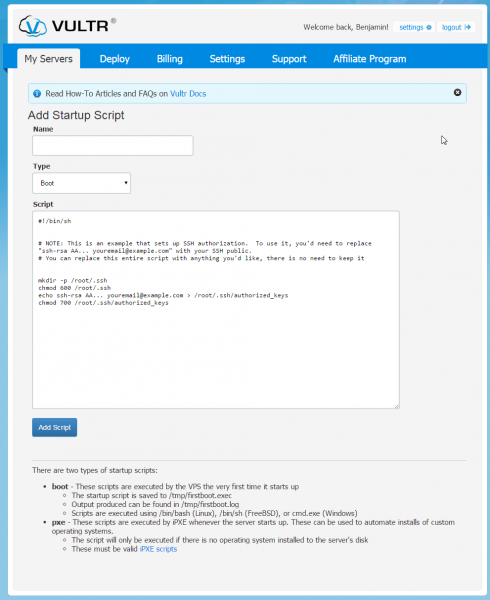 An SSH key can be assigned at the time of deployment which, if present will be required to log into the server. 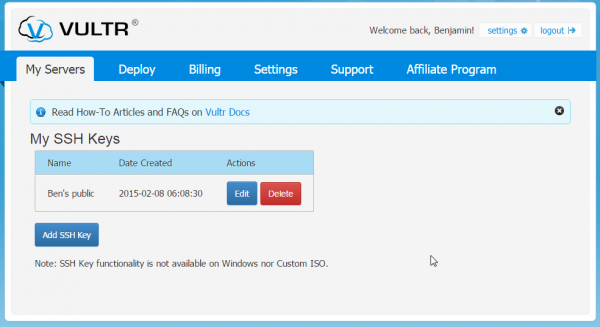 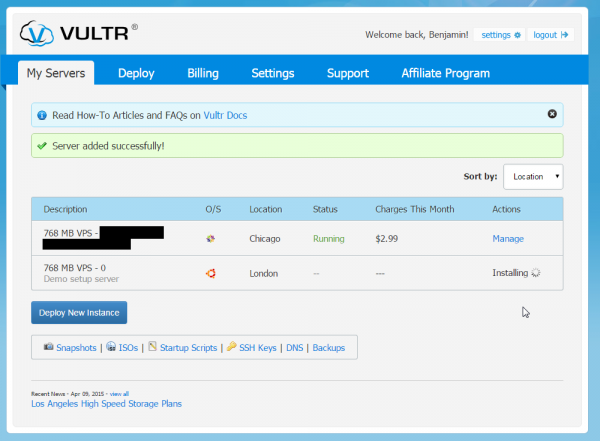 After the new VPS is finished installing you will be given the option to manage your new server.

After clicking on manage you will see your information about your server including it’s location, the type of OS that has been installed, it’s label and any tags that have been assigned to it. For example you could create a group of server that you tag as web servers or database servers. You will also see any IP addresses IPV4 or IPV6 address that have been assigned to your server.

Although I personally prefer to SSH into my servers, everything can be managed directly from the Vultr VPS management interface. Clicking on the console button will open a noVNC window directly to your VPS. 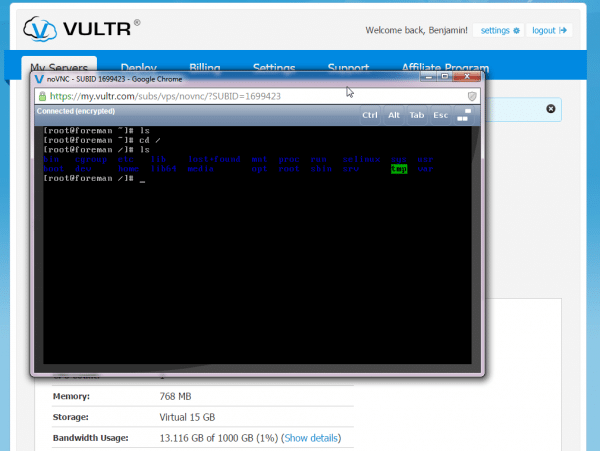 Server tags can be useful if you have many VPS and you would like to divide them into groups. 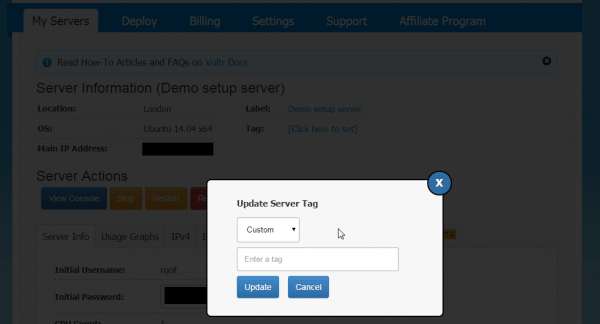 Delete and destroy your VPS

Delete and destroy your VPS

You can change the OS after deployment but it will delete all of your existing data.

This next snapshot shows the usage graphs. 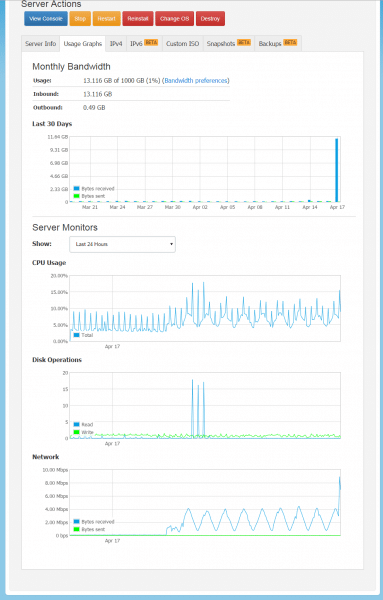 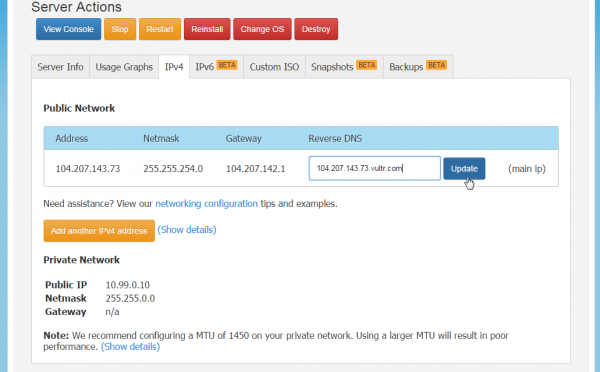 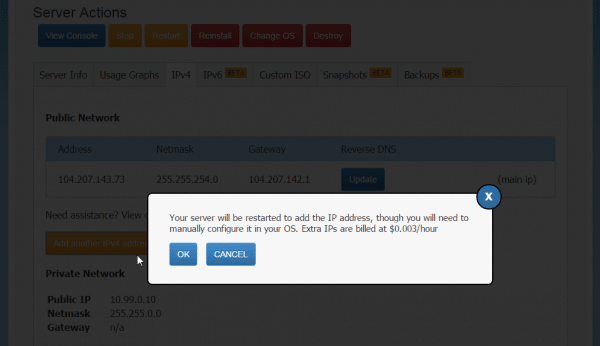 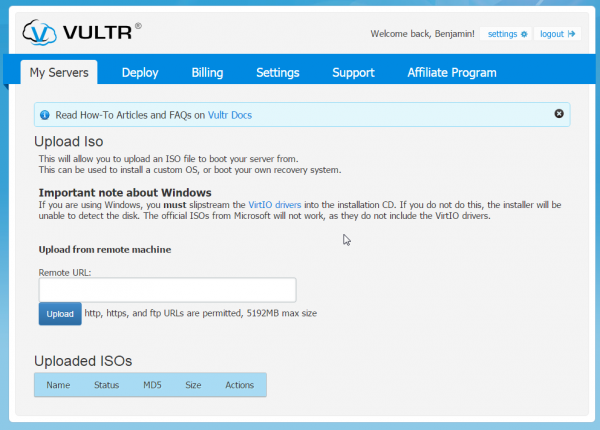 Take or recover from a snapshot 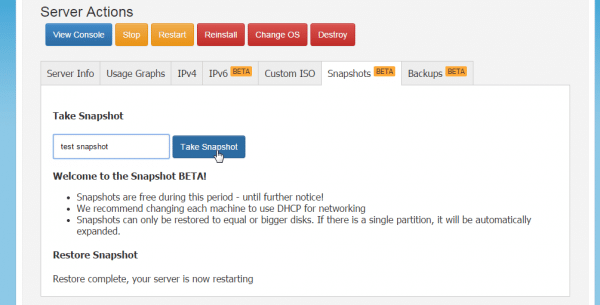 I didn’t have any backups but if I did they would have been listed here.

I do my DNS through a free CloudFlare account. I highly recommend them to everyone. However if you could also use Vultr’s included DNS manager. 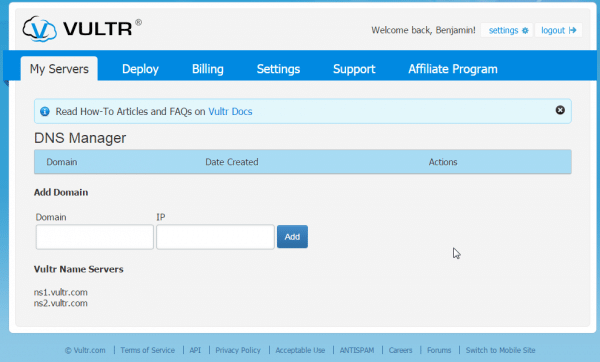 From the settings screen you can change your password, enable two Factor Authentication and enable API access. 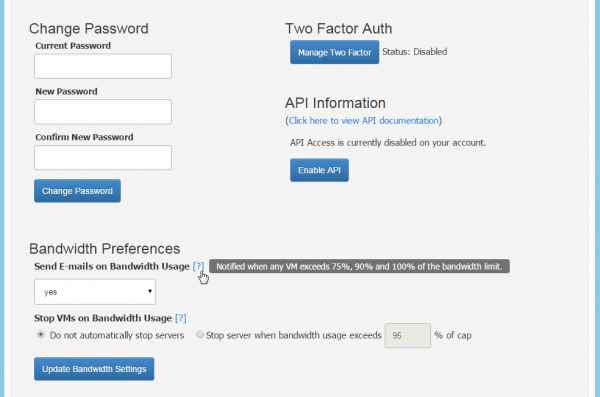 Two factor authentication is much more secure. I highly recommend enabling it. 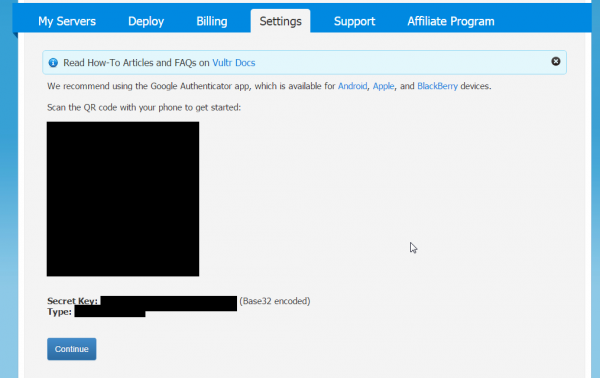 Vultr’s support is good and they also have excellent documentation. It doesn’t have as many tutorials as DigitalOcean but Vultr’s servers are much faster and there isn’t anything preventing you from using one of the many tutorials on the internet with your VPS.

Here we have the support interface. These tickets weren’t in regard to any problems that I had they were just a few general questions. 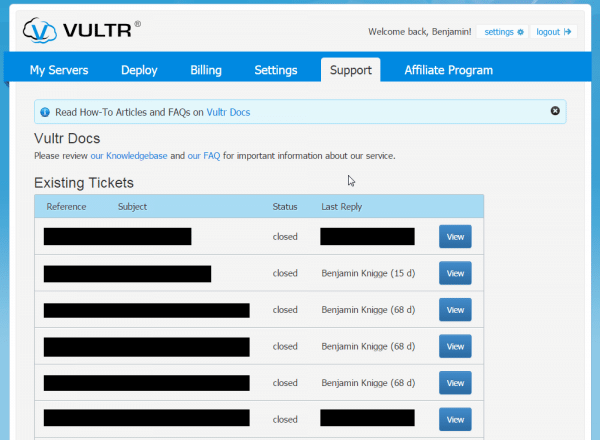 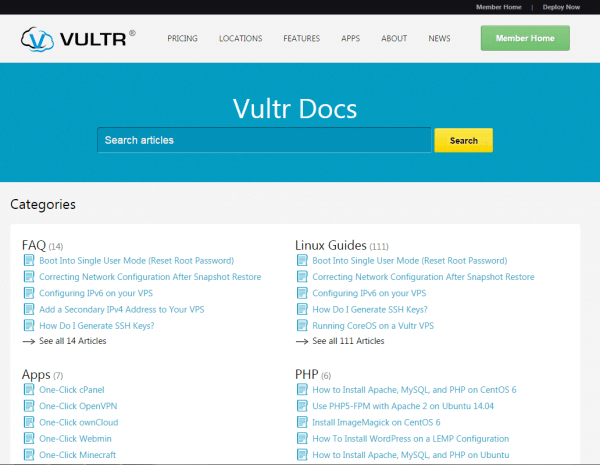