3438.
The actor and entertainer, Dick Gauthier, who died last week aged 85, was, as is glibly bandied about, known for a few things. He incarnated, so to say, the robotic CONTROL secret agent and KAOS defector known simply as "Hymie" in Get Smart. He also memorably embodied Robin Hood is the far, far too-short (as in less than one season) Mel Brooks-created TV spoof When Things Were Rotten (a show which needs no introduction or explanation to people I know, which should clue one as to what sorts of friends I prefer to have). He also, through the 70s and 80s, appeared innumerable times as a TV guest star, either in a drama or comedy or as a guest on a talk show or a panelist on a game show. He was kind of everywhere for a while.

What was elided from the obituaries and not commonly known seems to be that he excelled, in his way, at caricature, and had more than a modicum of talent as a cartoonist. He also, from 1985 through the 1990s, produced a number of how-to-art books, starting with The Art of Caricature in 1985. I found two of his several how-to books at Powells last weekend. Here they are. 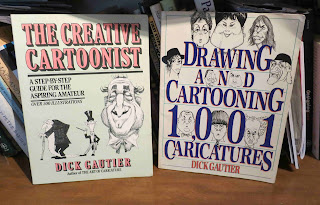 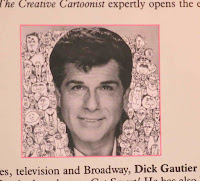 The Creative Cartoonist is a general approach to cartooning for pleasure and possibly for profession, and Drawing and Cartooning 1,001 Caricatures further expands his record of knowledge of that particular art.

Both books are really quite delightful. Gautier has a casual, self-deprecating style of writing that wins over the reader by presenting the text as though it was being spoken by a very nice acquaintance who loves to draw, loves to talk about it, and likes to show other people. His style is very low-pressure: he wants you to draw but he wants you to draw at the level that'll make you happy. And though his directions are simple, they aren't simplistic. Gautier clearly was someone who loved to draw and loved to think about about drawing when he wasn't.

The book The Creative Cartoonist starts, as many of them do, with the head. He shows you simple ways to construct a face and how many shapes you can make one of … 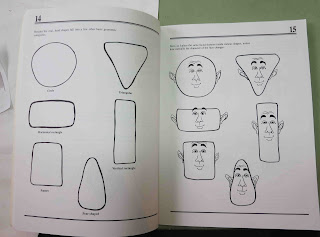 … a simple yet broad catalogue of standard facial expressions … 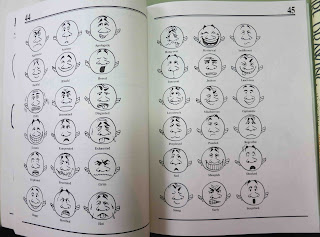 … and basic instructions on how to make it realistic and how to make it cartoony. There is nothing complicated here but if you follow his directions and practice and have fun at it, he gets you started on a good foot. 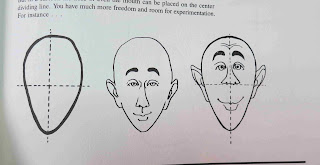 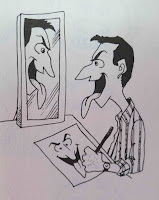 For those who want to kick it up to a certain level, Drawing and Cartooning 1,001 Caricatures has a lot to offer as well. Reading the text, I got the idea that Gautier had a certain sensitive spot about caricaturing; it is a lampooning of the subject and, as such, has to be handled with a soft touch. It can be a great and funny homage or jump a fine line and border on an insult with a touch of viciousness. Gauthier needn't have worried, though: these caricatures of actors Dennis Franz and Roy Scheider come through with a sense of affection for the subjects: 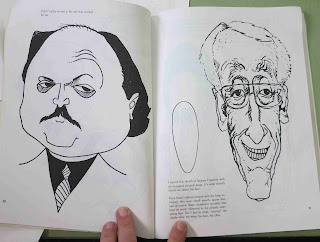 And, of course, what book of caricature is complete without Jay "Why the Long Face?" Leno? 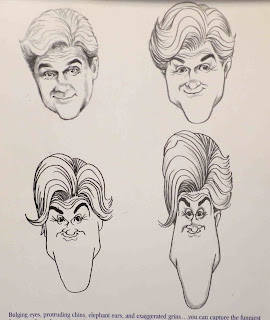 All drawings were, of course, made by the author, which is why I like that back cover above so much. The portrait of Leno in the upper left, the realistic one, is outstandingly well-done, I thought. The distortions, while expected, bring a certain sense of style to the caricature … they show an artist who is confident in his materials. That's what I expecially love to see.

Gauthier's caricaturing system works by studying the face and deciding what are the most remarkable features (what he calls 'dominant') and the less remarkable features (what he calles 'subdominant') and working within that hierarchy. Accentuate the dominant features and have the subdominant work with them. The result is a caricatured face which, while looking little like the reality, has enough of the reality in it so that there's no mistaking the identity of the personality.

He also introduces us to three levels of caricature. The first, portrait charge, is clearly caricature but is only slightly distorted. These would make a good cartoon character version. The second is the straight-up caricature, and the third would be an impressionistic rendering, where the dominant features command and the subdominant all but fall away.

To show he's a good sport, he did himself: Here is Dick Gautier in portrait charge version: 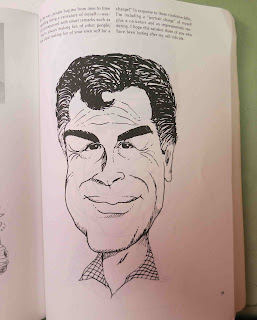 … And here he is in caricature and in full-on impressionistic mode. 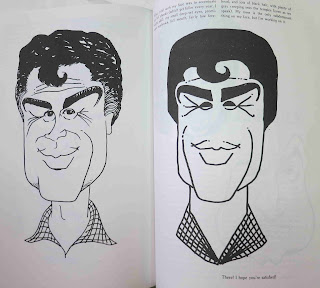 By his reasoning, his face is full of dominant features save the nose ("but I'm working on it", he mocks himself in the text), so in the impressionistic version, the nose utterly disappears.

Dick Gautier wasn't widely known for his art, and that's kind of a shame, because he has much to offer the beginner. His friendly style and accessible instruction are the perfect approach for someone who's afraid of doing their own art. He's no Andrew Loomis, but Loomis is the Holy Grail. Gauthier is a pal who you can hang around with … and who will take you into the art world gently, with no pretensions.

They're books I'd give any beginner.

Sobriety In The Time of Quarantine: T…
كيفية انشاء حساب يوتيوب
Sometimes, it is all rainbows!
The Basics of Using a Pre-Filled CBD …
Kiran SSC Math’s 8900+ Chapterwise PD…