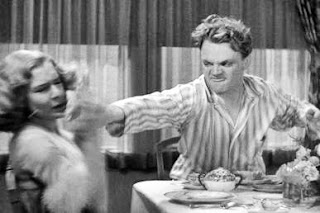 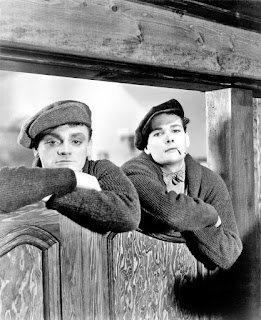 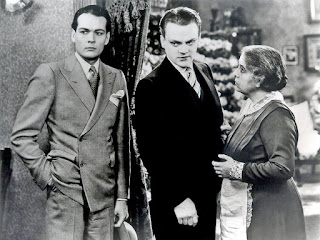 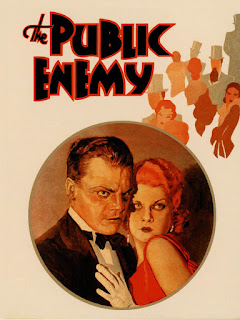 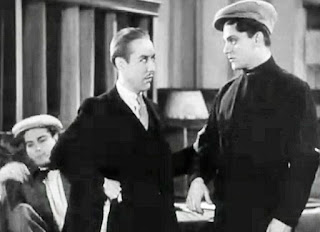 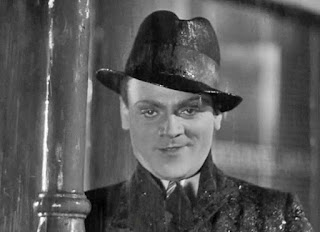 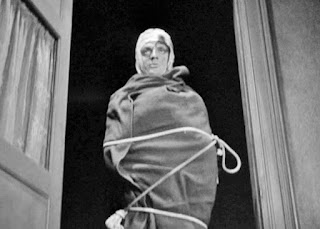 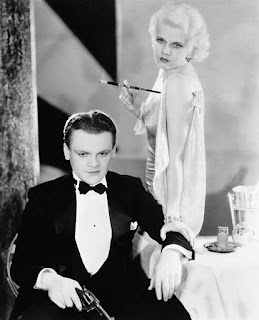 With this movie James Cagney became a big film star, and influenced Movie acting for the next 20 years. He had done a few films before this kick in the balls gangster film and even in small parts he always stood out, stealing films from the likes of George Arliss & Lew Ayres. Not typically handsome or smooth he still commanded and took over the films that he was in. There were gangster films before Enemy, even some great silent ones, and when sound came in the whole game changed. You could now hear the gunshots, the screeching cars roaring down the wet patent leather streets and the music of the period. Cagney changed film acting from the rural to the urban, from Griffith to Wellman.


The story goes that Cagney was suppose to play the secondary part, the nicer hood and best pal Matt Doyle but when the studio heads saw him in his other films they quickly changed their minds and gave Cagney the lead. Smart move, smart money, smart everything. This is Cagney’s movie from the get go, and to use an overused saying you can’t take your eyes off him. He controls everything in the film including the dialog, which he pretty much spits out, racing against the one lousy microphone probably hidden in a glass of beer, or the light on the table or maybe in a vase of flowers. It doesn’t matter. The important and lasting impression is how great and original his delivery is. The other actors are ok, they’re not bad, they’re stiff and nervous and rural looking as they try to clearly speak slowly and deliver their lines as if they are doing a production of  Way Down East and were trying to reach the last row in the balcony. They’re D.O.A and who wouldn’t be next to Cagney. Then there is Cagney’s relationship with women. The earliest incident is when he is a boy and teases and trips the young sister of his best friend Matt. Tommy’s misogyny comes to a boil in the famous grapefruit scene with Mae Clarke his unhappy girlfriend (she’s not even credited in the opening title credits). In a later scene Cagney becomes the sexual victim of a predatory older female moll who belongs to the leader of the gang. During a drunken night when the boss is away the moll tries her best to put the make on Cagney who will have nothing to do with her and when he wakes from his drunken stupor the next morning  he realizes that she has taken sexual advantage of him basically raping him. Did she ride him like a dead horse? Cagney is outraged, smacks her across her face and leaves the apartment in disgust.

Homo longing and dread has been a fixture in many gangster films from “Little Caesar” right up to contemporary crime movies. In “Public Enemy” there is a gay baiting scene with a very fey tailor who flirts it up with Cagney as he measures him for what is probably his first suit and Cagney doesn’t do much to discourage him in his flirting. Homo longing and dread can be seen across the decades and is especially visible in such films as “The Line-Up” “The Big Combo”, “The Crimson Kimono”  “The Killing” “House of Bamboo” and more recently in “The Untouchables” . Hand in hand with Homo dread and longing is also the safer male bonding which of course is more common in gangster and noir films.

In Public Enemy its pretty clear that Tommy has a thing for his boyhood friend and fellow thug Matt, and would rather be with him then with any “dame” including the luscious Jean Harlow who can’t seem to get Tommy to make love to her. In a late scene Harlow reclines filling the screen with her body as she tells Tommy that she is leaving him and there is no doubt as to why. Simply put Tommy can’t get it up for her and their relationship still remains chaste and unfulfilled. Harlow who’s lavish and lovely in the film but seems to be off somewhere in outer space delivers her lines in a strange dead and stiff manner, nowhere near the saucy and great vibrancy she will come to be known for just a year later.

She sits on Cagney’s lap, cradling his head and calling him her little boy they kiss and finally we think they are going to do it, when suddenly Matt is at the door with news of a crisis and Cagney is on the run once again failing to make Jean complete and happy. The final image in the film of Jean is her hurling a glass against the wall in anger and disappointment. A much different sitting on a lap will mirror this one 20 years later in “White Heat” where Cagney playing another psycho gangster this time sits on his mother’s lap. Mother’s are also a recurring presence in gangster films and are usually a benign and supportive wedge for their “good boys” but are occasionally toxic as is Margaret Wycherly’s great performance as Cagney’s mom in “White Heat.”

Most of the violence is shown off screen, the various shootings including the killing of a horse, and the climatic shoot out is heard but not seen. This dramatic and startling scene takes place outside a rival gang’s clubhouse. Cagney stands in the rain across the street from the clubhouse, two guns drawn and ready to take justice and revenge for the murder of who was probably the only person he truly loved. With an expression of ecstasy crossing his face this startling scene is sexual and provocative, it’s like Tom finally has his long sought after orgasm “la petite mort” the little death. The big death will come shortly thereafter and will end the film with a startling and memorable ending, that is one of the great finishes in all of cinema.

William Wellman who was known as “Wild Bill” began making movies in the silent period and stunned with his 1927 war movie “Wings” that won the first best picture Oscar but he really made his mark with Public Enemy. He went on to make popular and entertaining films in every genre including westerns, comedies and the wonderfully entertaining semi-musical “Lady Of Burlesque”. The look of “Public Enemy” is indebted to German films especially the crime stories of Fritz Lang, the film has sharp edges and deep shadows in its look, along with expressionistic set-ups and night street scenes. Wellman makes use of real music sources instead of a film score using the popular song of the period “I’m Forever Blowing Bubbles” which is used in the opening credits in a bold and jazzy way and once again during the film and finally as a bold coda at the end of the film. With the great Joan Blondell in a small role as a easy virtue gal who hooks up with Matt and manages to get him to marry her. One of the ten best films of 1931.