Stunning debut film from Francis Lee who also wrote the screenplay about the tough life on a isolated Yorkshire sheep farm. The land is rough but beautiful as are some of the people especially Johnny played with frankness and vulnerability by Josh O' Connor. Johnny lives on the farm with his dad who has had a stroke and is difficult but not mean played by the veteran British actor Ian Hart and his Grandmother also strong but not given to much emotional showings toward her grandson, the role is Played by the great Gemma Jones without one false note. Johnny is living a closeted gay life, he has brief but intense sexual encounters with whatever men pass his way. On to the farm comes a Romanian farm-hand Gheorghe, a short time hire played by the stunning Alec Secareanu who is tough but also kind and a hard worker and doesn't take any crap from anyone. The sparks are soon flying between the two young men, at first hostile and aggressive mainly on the part of Johnny but soon they are having sex which is very erotic and somewhat explicit. A loving relationship between the two start to flourish but there are problems mainly caused by Johnny. The film is also explicit in the birthing and skinning of the baby sheep which might cause some distress, but this is the life of these hard working minimal people. There is also some discrimination but not because of the gay life of the leads, but because of Gheorghe's being Romanian, and as I said he takes no shit from anyone. Of course Brokeback Mountain will come to mind, it can't but not come up. For gay men of a certain age it will no doubt remind them of those cheap erotic paperback novels about farmhands that were sold in racks on 42nd street, but this is a film to be enjoyed and treasured for its own voice, even though the thick Yorkshire accents make a lot of the dialogue difficult to understand. One of the best films of 2017 and a shame that it did receive the attention it deserves even though it got a 99% approval rating from rotten tomatoes. 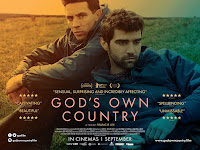 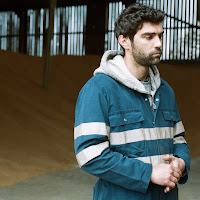