including "Many Saints Appear" (as Apparitions)
Here Is Evidence Necessitating You and Everyone Else to Change the 'Military Programming' Mentalities Being Displayed Among People in Worldwide Leadership Positions While the Current Path Toward Nuclear Devastation for Humanity Continues Gaining Momentum in Russia. 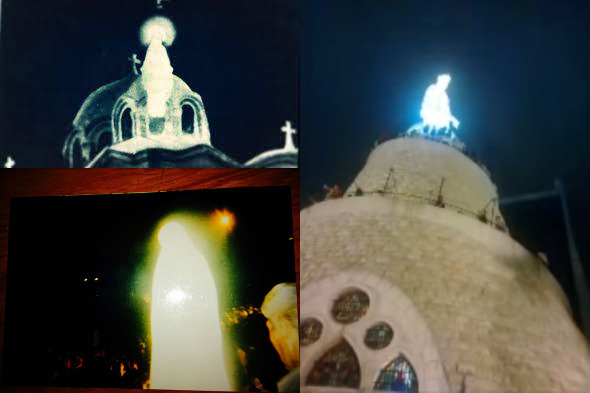 photos of apparitions symbolic of the 'virgin Mary' clockwise from top left: from Egypt in 1968, Lebanon in 1989 and New Mexico in 1994
Note from MRB: Regarding this evidence of the mysterious events and transcendental messages that manifested in the life of Veronica Lueken, there are end-of-civilization warnings and testimonials about apparitions including 'Our Lady,' 'Jesus,' Catholic 'Saints' and—perhaps the most revealing aspect of all upon considering this 'puzzle' of a paranormal case chronology—Archangel 'Michael,' historically the scriptural representation of an angelic Force interacting with mankind throughout the ages.  Our American news media must deliver the news about phenomenal Messages of Divine Love instead of  continuously focusing on incidents of violence and hate being instigated by people motivated by anger, frustration and hopeless despair.
My longtime readers should be advised that personally here in Los Angeles, while driving I'm seeing sychronicity manifestations of a constant continuous succession of 'pest control' vehicles in addition to intermittent solar plexus voice manifestations reflecting a Devilish negativity.  About the publication of this post, that 'Voice of Authority' said "NO" and I'm certain it is Veronica Lueken's voice that again manifested at a few minutes after 7 p.m. last night with "Right!" while I was writing this article.  This has been at least the third time her voice has manifested during the last few days.
Recent news headlines include "What If Russia Uses Nuclear Weapons In Ukraine" [and what about in America?]; Russia's Medvedev suggests U.S. should beg for nuclear arms talks"; "Putin says Russia ready to use nuclear weapons in case of 'threat to sovereignty'"; and "Russia Refuses to Answer if Nuclear War Could Start Over Ukraine."
There are many mainstream books about the 'Marian Apparitions' and—considering the Veronica Lueken case alone—numerous 'miraculous photographs' and links/correlations noticeable with other so-called 'Marian Apparitions' case chronologies.  The scanned book pages shown in this article are from Our Lady of the Roses, Mary Help of Mothers: A Book about the Heavenly Apparitions to Veronica Lueken at Bayside, New York (1981) — Click twice on each individual page to see a larger image. 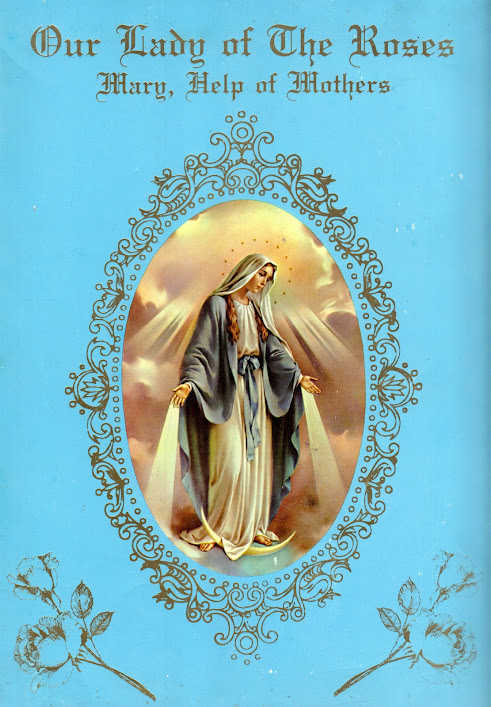 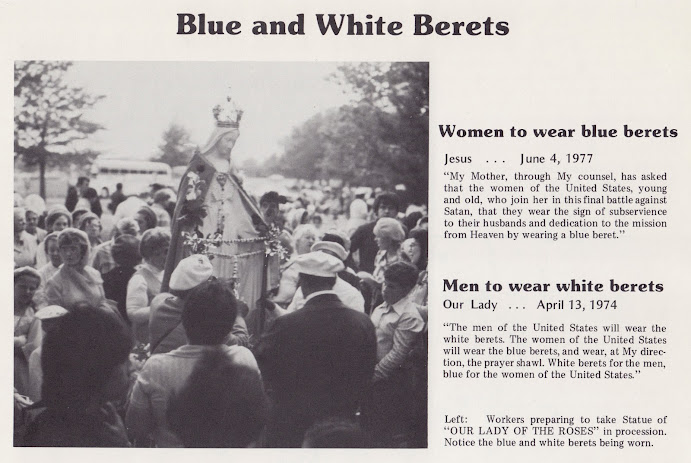 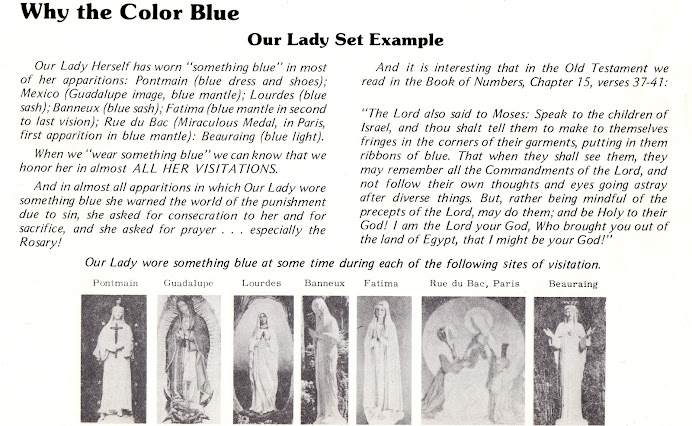 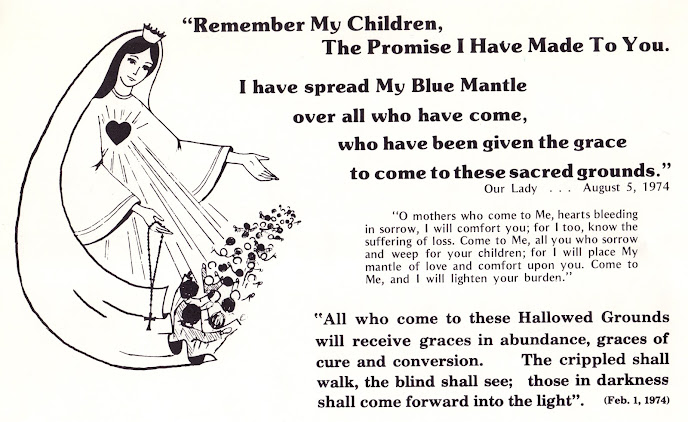 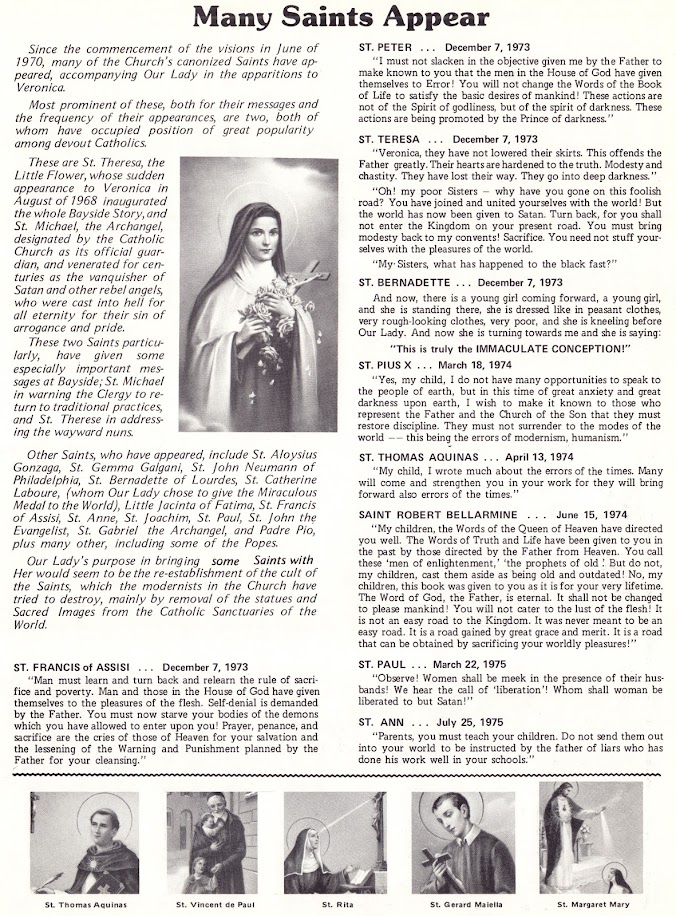 (From the concluding text on page 22:

A TEST FOR VERONICA
May the 8th is a great feast of St. Michael the Archangel, who has made prominent appearances during the Bayside apparitions.  The Feast is related to the Archangel's appearance at Monte Sant'Angelo, in the Gargano, Apulia, near San Giovanni Rotondo, Italy, where Padre Pio lived and died.  May 8th commemorates the appearance of St. Michael in a cave on the mountainside, sometime between the years 520 and 530 A.D.
The date has always been regarded as an important feast on 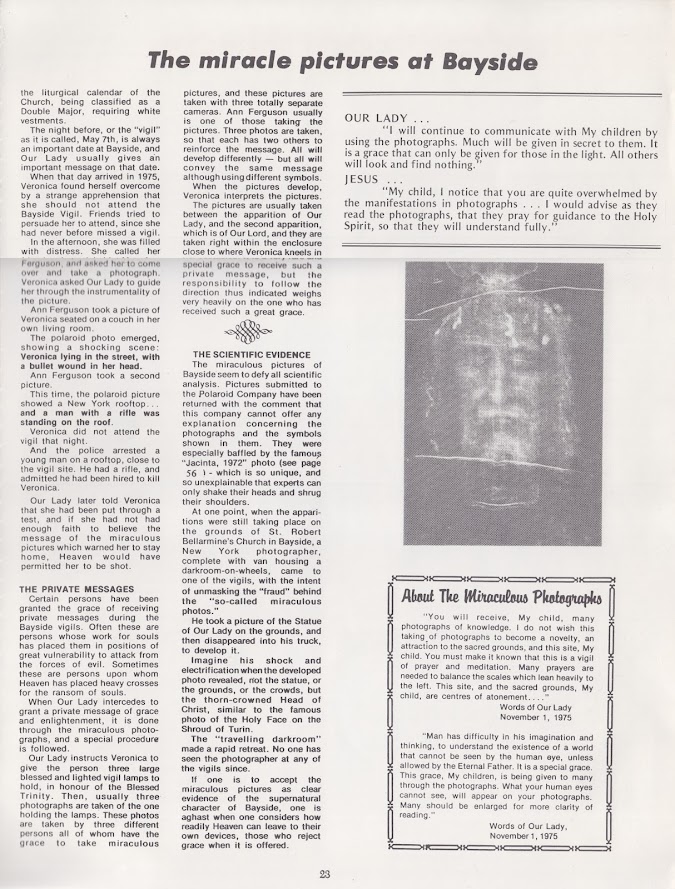 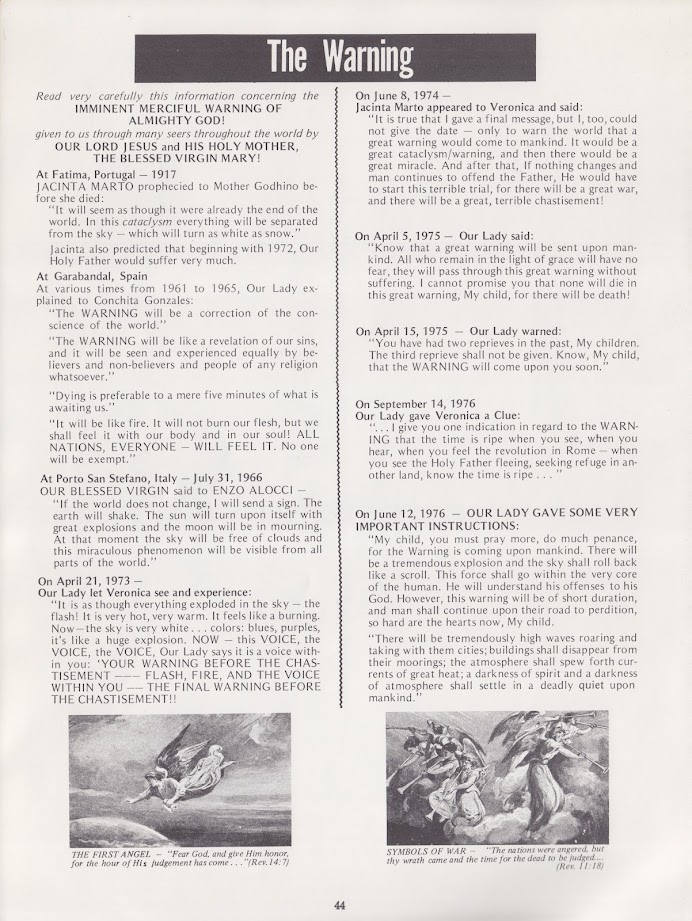 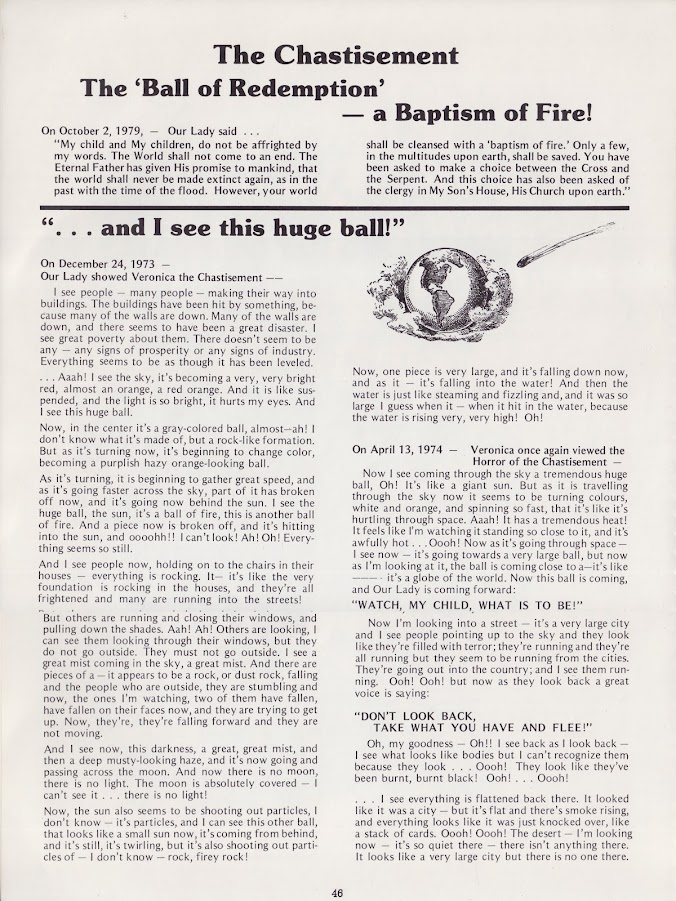 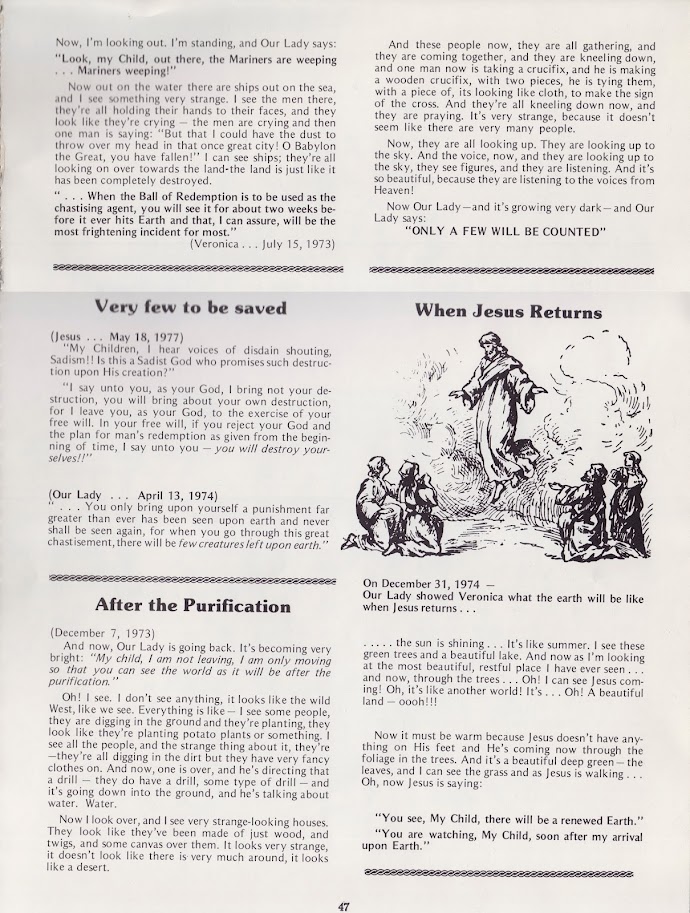 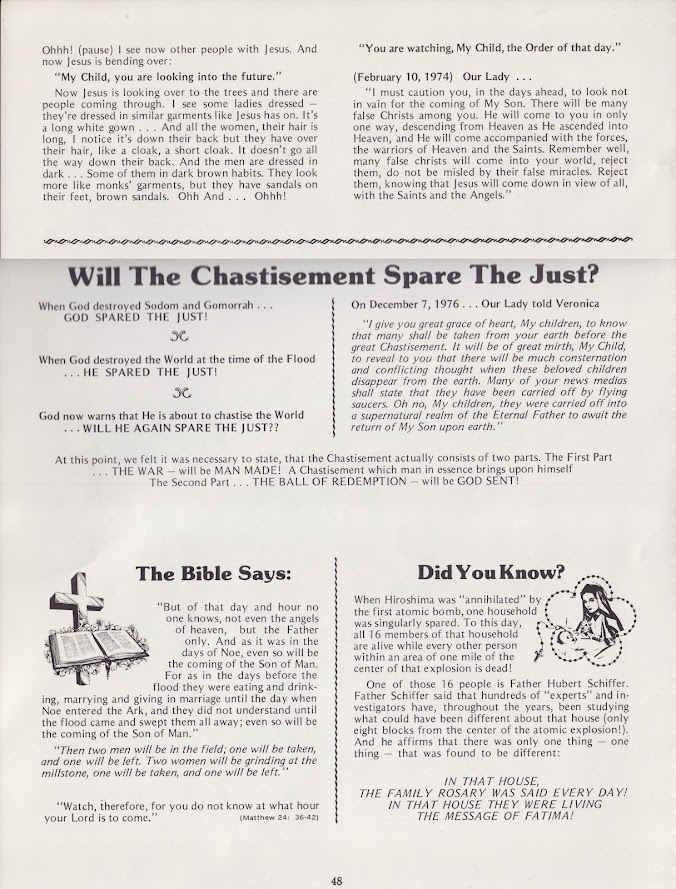 "Corollary to My Article 'UFOlogy and Seance Phenomena Correlations . . .'" 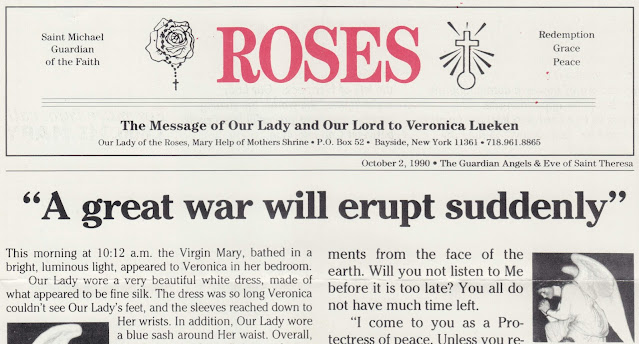 Also about the Veronica Lueken case: "Transcendental Communication from 'Our Lady of the Roses'"


This post first appeared on Interesting Articles, Links And Other Media, please read the originial post: here
People also like
5 Unusual Phenomena That Video Technology Has Given Us
3 Christian art work app
The Russia-Ukraine Conflict’s Impact on Europe’s Economy and Living Costs, and the US role
Three Minute Marketing
GKUA, Weedmaps And Young Money Host First GKUA VIP Party Series With Mellow Rackz
10 reasons we can't wait for the Premier League to return with the big kick-off just a WEEK away
7 Chicago-Based AAPI Artists To Discover
Ancient Gods: History of the World
Trivia Quest April 30 2022 All Episode Questions & Answers