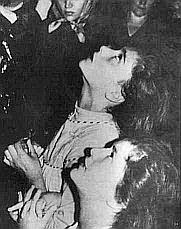 This image shows the 'visionary trances' of the children at Garabandal, Spain.

There are websites including fatima100.fr/en/n/ reporting about the Fatima, Portugal supernatural appearances of the 'virgin Mary' and 'Archangel Michael' in 1917.  The report includes the following information.

Sister Lucia’s interview with Father Fuentès is probably the text which is closest in content to the third secret.  It received the imprimatur of Monseigneur Sanchez, Archbishop of Veracruz.  It was the object of several publications, notably in the review Fatima Findings published by Father Ryan in June 1959, and in the Italian magazine Messagero del Cuore di Maria, n° 8-9, August-September 1961.

It was the object of a retraction only on the 2nd of July 1959, in other words eighteenth months later.

Father Alonso, the best specialist on the subject, after being highly critical of it, did justice to Father Fuentès and affirmed that it was perfectly reliable.

What Father Fuentès said in the actual text of his conference to the Mexican religious community certainly corresponds with the essence of what he heard from Lucia during his visit on the 26th of December 1957.  Because, even though they be mingled with oratorical considerations on the part of the preacher, even though they be arranged in a literary manner, these texts say nothing that Sister Lucia has not said in her numerous writings which have been made public.  Perhaps the principal error consists in having presented these texts as coming literally from Sister Lucia herself, expressly and formally as a Message addressed by her to the world.  This was certainly never the intention of Sister Lucia.

Here are some broad extracts of this interview such as it was published in the above-mentioned journals:

I wish only to tell you of the last conversation I had with her, on the 26th of December of last year.  I met her in her convent.  She was very sad, pale, emaciated.  She said to me:

Father, the Most Holy Virgin is very sad because no-one has paid any attention to Her message, neither the good nor the bad.  The good continue on their way, but without giving any importance to Her message.  The bad, not seeing the punishment of God actually falling upon them, continue their life of sin without even caring about the message.  But believe me, Father, God will chastise the world and this will be in a terrible manner.  The punishment from Heaven is imminent.

Father, how much time is there before 1960 arrives, and what will happen then?  It will be very sad for everyone, not one person will rejoice at all if beforehand the world does not pray and do penance.  I am not able to give any other details because it is still a secret.  According to the will of the most Holy Virgin, only the Holy Father and the Bishop of Fatima are permitted to know the secret, but they have chosen to not know it so that they would not be influenced.

This is the third part of the message of Our Lady which will remain secret until 1960.

Tell them, Father, that the Most Holy Virgin told my cousins Francisco and Jacinta, as well as myself, many times, that many nations will disappear from the face of the earth and that Russia will be the instrument of chastisement chosen by Heaven to punish the whole world if we do not beforehand obtain the conversion of that poor nation.  ( . . . )

Sister Lucy also told me:  Father, the devil is engaged in a decisive battle with the Holy Virgin, and as he knows what it is that most offends God, and which in a short space of time will gain for him the greatest number of souls,  he does everything he can to capture souls consecrated to God, because in this way the devil separates souls from their leaders, and thereby he can seize them more easily.

Another article about this paranormal case chronology is "Is the Angel of Portugal Actually Saint Michael the Archangel?"

First Night of the Seven (7) Nights o…
Mastering the Art of Selling Your Own…
Oscar health insurance florida review…
Body Positive Fat And Sexy
Best 10 Food Delivery Apps to Satisfy…
Another chronology of supernatural appearances of the 'virgin Mary' and 'Archangel Michael' was at Garabandal, Spain 1961-1965.  The website garabandal.org presents a report entitled "THE MESSAGES OF FATIMA ARE THE SAME AS THE MESSAGES OF GARABANDAL!!!"  Here are quoted excerpts of the 'Message of Garabandal.'

"Many Cardinals, many Bishops, and many Priests are on the Road to Perdition, and are taking many souls with them."


"The cup is filling up, and if we do not change, a very great chastisement will befall us."

The page "Saint Michael Defend Us" reports that Garabandal is the place where there was a supernatural appearance of the Archangel Michael.

In the evening of June 18, 1961, the four girls were playing on the outskirts of the town —

Suddenly they heard a loud noise, like thunder, and saw before them the bright figure of the Archangel Michael.  On the following days the Archangel appeared to them again in the same place.  He announced that on July 2 they would see Our Lady.  This was the beginning of the Garabandal events.
Our Lady's Last Message of June 18, 1965

Since my Message of October 18, 1961 has not been complied with and has not been made much known to the world, I will tell you that this is the last one.  Before the chalice was filling now it is overflowing.  MANY CARDINALS, MANY BISHOPS, AND MANY PRIESTS ARE ON THE PATH OF PERDITION AND THEY TAKE MANY SOULS WITH THEM. TO THE EUCHARIST, THERE IS GIVEN LESS AND LESS IMPORTANCE.  We should avoid the Wrath of God on us by our good efforts.  If you ask pardon with your sincere soul God will pardon you.  It is I, Your Mother, who through the intercession of St. Michael, wish to say that you amend, that you are already in the last warnings and that I love you much and do not want your condemnation.  Ask us sincerely and we will give to you.  You should sacrifice more.  Think of the Passion of Jesus.

The events at Garabandal included visionary trances as documented on video.   St. Michael the Archangel Is the Patron Saint of Kyiv, the Capital of Ukraine.  (article)