Few Things About Bioshock Infinite Songbird that You Should Know 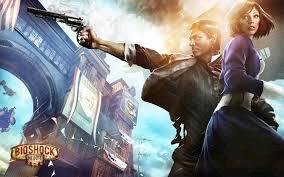 Okay, if we talk about FPS genre, then the games that we mostly play on console are the ones that have something to do with real life war between soldiers against terrorists, like: Call of Duty, SWAT, etc.

However, when it comes to games that combine many game genres from FPS, RPG, sci-fi, a little bit of horror and fantastic storyline, then nothing can beat Bioshock Infinite.

Songbird, which plays the role as villain character in this game, could be one of the magnets that makes Bioshock Infinite interesting to play.

In Bioshock infinite, Songbird plays as one of the main enemies of Booker Dewitt.

His (Songbird is male by the way, according to Elizabeth’s call to this bird) main job in this game is to guard Elizabeth and prevent other people, especially you as Booker, to rescue and help her escape from the tower of Monument Island, which could bring nothing but dangerous threat to Comstock himself and most importantly, his position as the prophet of Columbia.

As we all know already, in Bioshock Infinite, Songbird is really huge as a robotic bird. This bird was built by Lutece twins, Robert and Rosalind Lutece, under the order of Comstock.

And thanks to Lutece’s technology, they manage to create this bird as a really powerful and perfect machine that is unbeatable even by the main hero character in this game, Booker Dewitt.

As being shown in many cutscenes in Bioshock Infinite, Songbird has 3 different colors of eyes.

When the color of his eyes turn into green, Songbird will remain calm and take no action against people around Elizabeth.

However, if the color turns to yellow, then it means Songbird is ready to attack people that are close around Elizabeth, especially you as Booker.

And finally, when it’s red, it means Booker has to stay away from Elizabeth as this bird will attack and even kill Booker with his giant steel claws.

The good thing is, most of the time, Booker is always saved by Elizabeth because every time Songbird gets mad, she will comfort this bird and calm his anger to the low, thus sparing Booker’s life.

In this moment, after receiving the key from Booker to escape from the tower (which was given by Luteces when delivering Booker to the lighthouse at the beginning of this game), Elizabeth hears a very loud scream from outside the roof.

And apparently, it’s Songbird that screams loudly maybe because he senses the possible threat around Elizabeth, thanks to Booker’s arrival.


Elizabeth and Booker manage to escape from the tower, however something that they don’t really know about the real situation around them is that, Elizabeth has been caged in a very high tower.

The reason why she is placed in that high tower is, Comstock already predicts about Booker’s arrival who will attempt to rescue Elizabeth and get her out from the tower.

So Comstock decides to put Elizabeth in that tower and order Songbird to guard her from possible threat in the future.

So when opening the door of that tower, Elizabeth and Booker must jump from a very high tower in order to avoid Songbird.

Thankfully, Booker has a grappling hook that he can use to hang on the skyline and rescue Elizabeth from falling down far away to the ground.

However, after reaching almost at the end of skyline, they both are falling down on the ocean, and this is when Songbird appears for the very first time in the game.

He then tries to attack Booker that is already drowning in the sea. Luckily, Songbird doesn’t manage to grab Booker as this bird cannot survive in the water.

The Second Appearance of Songbird
The second time this robotic bird occurs in Bioshock Infinite, Songbird, is trying to attack the airship which contains Booker and Elizabeth.

He manages to crash the airship down but he then disappears after you are conscious from your faint.

This is the moment when Luteces, Robert and Rosalind Lutece, appear to Booker and give him some kind of paper that contains the manual or secret to control Songbird.

Songbird Appears Outside the Building
The third time this bird appears in Bioshock Infinite, Songbird manages to track down the location of Elizabeth and Booker, when they are heading toward Comstock’s house.

Luckily, they manage to hide inside the building below the table, making it difficult for Songbird to search through the building and find where Elizabeth and Booker really are.

Soon after that, Songbird disappears again from the cutscene as Booker and Elizabeth’s journey continues.

As a refresher, in this moment, Elizabeth asks Booker to not let Songbird find and bring her back to the tower again, with her hands putting Booker’s hands on her neck.

Songbird’s Fourth Appearance in the Game
And the fourth appearance of this bird in Bioshock Infinite, Songbird manages to find Elizabeth and Booker when they are trying to continue the journey toward Comstock house, after breaking in Lady Comstock’s coffin.

Unlike the previous acquaintances with Booker, this time, Songbird is almost an inch away to kill Booker, after throwing him to the building.

Luckily, Elizabeth comes to the rescue and manages to calm Songbird down as he decides to spare Booker’s life.

However, this turns out to be the turning point of the game.

After getting Elizabeth back to his possession, Comstock with all of his brilliant scientist decide to brainwash and torture Elizabeth in order to turn her rebel attitude into the obedience, as this will make it easier for Comstock to control Elizabeth and thus, prepping her to be the heir of his throne.

The Moment When Songbird Helps Booker
But thanks to the future Elizabeth who drags Booker to the future and shows him everything that will happen in the future, not to mention the secret to control Songbird with an instrument called “The Whistler”, this is the moment in Bioshock Infinite, Songbird will reveal his bright side to both Elizabeth and Booker.

Unlike in the previous occurrences where this bird is really cruel to Booker, this time Songbird doesn’t try to kill Booker anymore and instead helps him to protect the thing on the airship called “The Zeppelin” that is really vital if Booker and Elizabeth want the airship to land them safely to the Monument Island.

After getting the order from Elizabeth, Songbird finally decides to help Booker protect the airship.

This is also the moment when Songbird will show his face for the last time in this game.

Songbird’s Final Appearance
In his last appearance in Bioshock Infinite, Songbird decides to obey everything that Elizabeth and surprisingly, Booker say to him.

Thanks to the instrument and the song notes given by the “future” Elizabeth called “The Whistler” and “C.A.G.E respectively, Booker finally knows how to control Songbird and prevent this steel-armored bird to kill him.

And with that instrument, Booker and Elizabeth decides to use Songbird as the tool to destroy the siphon, the machine that was made under the order of Comstock, which has been controlling Elizabeth to use her power (called “the tear”) at the fullest.

When Songbird Dies
As the siphon is destroyed and Elizabeth can finally use her full power, the instrument that Booker uses to control Songbird is also broken, so Booker can’t control Songbird anymore.

Soon after destroying the siphon in Bioshock Infinite, Songbird chases Booker again and aims to kill him as this bird can finally get his sense back and sees Booker as the threat around Elizabeth.

Luckily, thanks to Elizabeth’s full “tear” power, she decides to use her tear to transport 3 of them to the city called Rapture, which is an underwater city used in the previous series of this game, Bioshock 1 and 2.

And in the last final occurrence of this bird in Bioshock Infinite, Songbird is brought by Elizabeth with her full power to the Rapture.

Therefore, thanks to the extremely high pressure of the ocean, Songbird can’t survive this depth and breathes for the last time, as his 3 color eyes are broken and fading away.

In this moment, the game almost comes near the end, as Elizabeth and Booker finally found the whole secret about the existence of Comstock, Elizabeth and Columbia.

Few Things About Bioshock Infinite Songbird that You Should Know