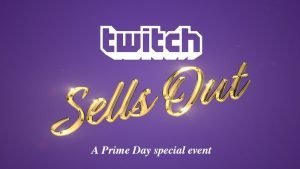 Amazon Prime Day is near, and Twitch has just announced its two-day Twitch Sells Out event to celebrate it.

Happening between July 15 and 16, the event will be hosted by some of Twich’s most well-known streamers. These streamers will be showcasing a bunch of gaming and electronic deals, in addition to some “unusual items” that have yet to be revealed. As for the names of the streamers themselves, the full list is scheduled to be announced on July 10.

In order to participate in Twitch Sells Out, fans need to have a Twitch Prime account. For those who don’t have one yet, signing up for a free trial before the big event works just as well. A Twitch Prime account itself, which comes with Amazon Prime, has benefits such as a free channel subscription, as well as Prime loot for various games.

For those who are interested in co-streaming, the feature will be enabled for the duration of the Twitch Sells Out event. If streamers have the Blacksmith Extension installed, they will get an overlay that contains product links. Twitch Partners or Affiliates could also earn a percentage of revenue by enabling the extension on their channel.

Something else that’s in store for Prime members is 30 per cent off their purchase of Twitch merchandise between July 3 and July 16. Members can use the promotion code “PRIME2019” at the checkout to get this deal.