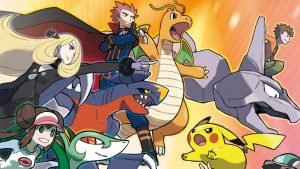 The upcoming iOS and Android game Pokemon Masters had an info blow-out yesterday and slated for summer 2019 release.

DeNA’s take on Pokemon does not involve catching the critters; rather, you amass teams of three trainers with assigned partner Pokemon and have them fight in triple battles. In this game, the franchise-spanning cast of trainers seeks to become the champion of the Pokemon Masters League in the artificial region of Pasio, collecting badges along the way. Every character is in one pre-set “sync pair” with their Pokemon. A gatcha system of randomly obtaining trainers has not been explicitly confirmed, but it is very likely.

Fighting is in real time, with your Pokemon having access to two moves, an item, and a trainer ability. Your item and skill usage are limited, but attacks are just on cooldowns. It’s nice to see a Pokemon game that significantly alters the battle system, even if it’s just a mobile spinoff. If you want to see what a slightly more fleshed-out version of this system looks like, check out the fangame Pokemon: Project Catch ‘Em All.

The summer of 2019 is upon us, so we won’t have to wait very long before Pokemon Masters is available on our devices. We’ll let you know if we hear any more details in the meantime.