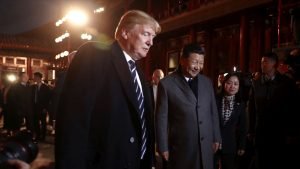 In what may be the most ambitious gaming crossover to date, Nintendo, Microsoft and Sony have released a joint statement in response to President Trump’s proposed Tariffs on Chinese goods.

Sex Tips for Men: How to Be Better in…
What Will Happen to Flash Games?
Stremio Alternatives- Apps Like Strem…
Bluehost Review-Best Choice by Many W…

The proposed tariff would see a 25 per cent tax on all consoles made in China, which would have significant consequences for the gaming industry. The three industry giants say that the move would hurt American consumers more than it would China, and potentially put more than 220,00 jobs in jeopardy. Sony, Microsoft and Nintendo released a seven-page document that goes into more detail on the potential impacts of the tariffs. Their three main points are that the tax would, hurt consumers, developers, retailers and manufacturers; put thousands of U.S. jobs at risk, and stifle innovation in the gaming industry and beyond. An excerpt from the statement is featured below.

“While we appreciate the Administration’s efforts to protect U.S. intellectual property and preserve U.S. high-tech leadership, the disproportionate harm caused by these tariffs to U.S. consumers and businesses will undermine—not advance—these goals. Accordingly, we respectfully request that the Administration remove HTSUS subheading 9504.50.00, covering video game consoles, from the final list of tariffs, and thus refrain from applying tariffs on these products.”

The reason for the looming tariffs is that Trump has tasked the USTR (United States Trade Representative) with creating a list of Chinese imported goods to tax. His reasoning for the move is that by making Chinese products more expensive, more people and companies will buy from American manufacturers. The issue in the gaming sphere is that China makes most of the hardware for the major gaming companies, and while Nintendo has started to move some of their production to Southeast Asia, the bulk is still in China. This opposition isn’t limited to the video game space, as back in May, the Game Manufacturer’s Association (GMO) also released a statement to Polygon voicing their opposition to the proposed tariffs.

“There’s been a lot of conversation among our members in the last two days about the impact of this and how it’s going. It’s potentially a 25 per cent increase on the costs of importing products from China. We’d pass those increases on to the retailers, who would pass them on to consumers. And so there’s definitely this ripple effect in the economy.”

At the time of publication, there has been no response yet from the U.S government. It remains to be seen if the U.S. government will actually impose the proposed tariffs, but either way, this is a decision that will impact the gaming industry for years to come.