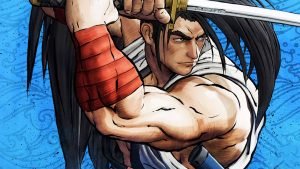 Samurai Shodown is one of the few fighting game franchises that I’ve never spent much time with.

Outside of seeing some of the more popular characters who would cameo in crossover titles and the occasional play session with friends, I’d never gotten the chance to sit down and really learn one of the many entries in the series. Thankfully, SNK’s newest game in the franchise, simply titled Samurai Shodown, has shown me exactly why the Samurai Shodown franchise has stuck around for as long as it has as well as why it needed a revival.

Samurai Shodown is a 2D fighting game which focuses on weapon-based combat. Taking place in 1787, feudal japan, warriors from across the nation fight for their own personal ambitions.  While Samurai Shodown is the twelfth entry in the mainline franchise, this title is meant to serve as somewhat of a reboot of the series. As a result, Samurai Shodown’s base roster of sixteen playable characters consists mostly of characters who were featured in the original with only three newcomers. As of this review, additional characters are planned to return as downloadable content. 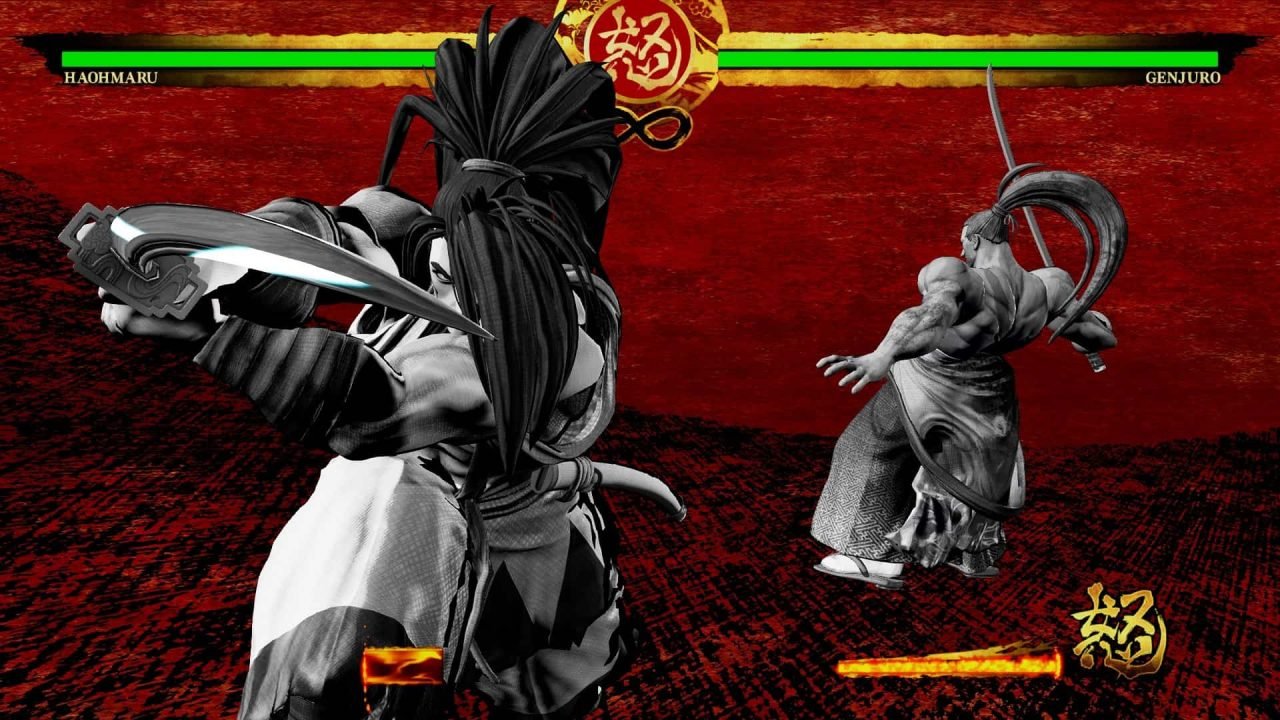 This game marks the series’ first entry using Unreal Engine 4 and for the most part, it’s a smooth transition. Character models look great from a 2D angle, with a unique type of shading that almost gives the game a painterly visual style. Unfortunately, this style sometimes backfires, creating odd clipping issues. This is especially true during certain close=up camera angles. A nice touch which adds a lot of character to Samurai Shodown is its willingness to show graphic violence. The characters of Samurai Shodown are hacking away at each other with swords and other equally dangerous weapons and the game makes no effort of hiding that. Blood will not only splatter when characters are hit, but it will paint character’s clothing, skin and weapons. If the damage is bad enough, characters can even a battle by cleaving their opponent in two. Luckily, stages suffer none of the problems that characters have in the transition to 3D. Nostalgic gamers may still prefer the beautiful pixel art backgrounds used for the Neo Geo entries, but SNK did an excellent job adapting the same serene feel found in many of the stages into 3D backgrounds. Samurai Shodown has no English dub for its voice acting, but the Japanese voiceovers do add to the game’s strong Japanese aesthetic.

For fans of fighting games, Samurai Shodown will likely take a lot of adjustment. Where most relevant fighting games center themselves around highspeed and creating combo strings, Samurai Shodown is essentially the opposite. Most characters are heavier and because the damage output for most attacks are so much higher, battles generally flow at a much slower and methodical pace. With carefully planned strikes, Samurai Shodown fights can be decided in a matter of five attacks or less. It took me a while to break the habit of rushing in for a combo the moment I found an opening but matches became much more enjoyable when I did. 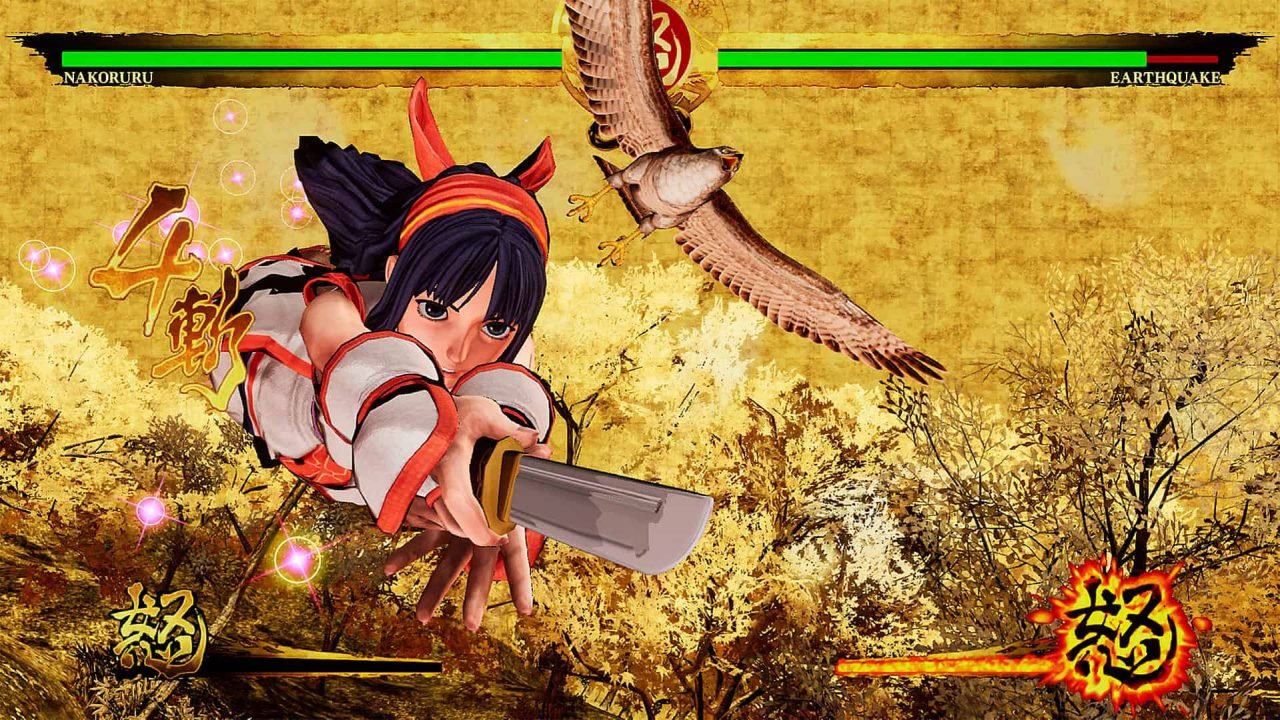 Samurai Shodown aims to keep things simple with its control layout of light, medium and heavy attacks along with kicks. Special moves can be performed with the typical quarter circle movements. Where Samurai Shodown starts to differentiate itself is when is through its many weapon focused mechanics. In addition to being able to perform a dodge in place, players are able to parry incoming enemy attacks if the action is performed with perfect timing. Parrying attacks can also result in your opponent being disarmed, sending their weapon flying across the stage. Being able to deflect attacks is one of the main elements that turns Samurai Shodown from a simple fighting game to an intense mind game. Predictable movements will likely result in being disarmed, putting you at a huge disadvantage. Another mechanic to help player’s strategically claim victory is Samurai Shodown’s rage gauge. When charged, this meter can be used to perform a special weapon flipping techniques, which will do significant damage while disarming your opponent. This meter can also be sacrificed once per match by entering the “Rage Burst” mode. This mode not only acts as a buff, but also grants players access to an extra powerful attack which does more damage, the lower the user’s health is.

Although Samurai Shodown offers a good amount of different modes, they don’t offer much in the form of variety. The game’s “story” mode is basically arcade mode but with a twenty second intro placed on top. There are no real cutscenes and outside of a single rival battle for each character, there’s no explanation for why any of these characters are fighting or interacting at all. Many of the other game modes that Samurai Shodown features are similar. Each of them boils down to fighting a row of enemies for absolutely no reason and with next to nothing changing up the formula. 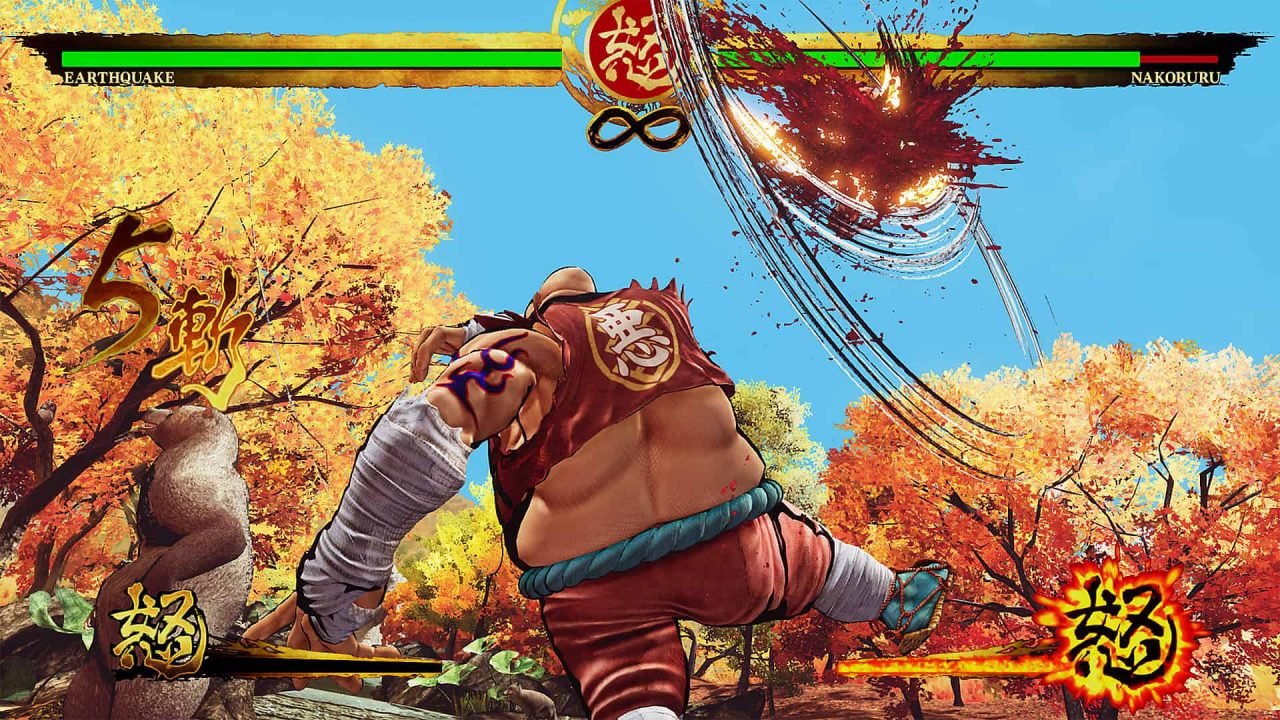 It wasn’t easy finding a match online in Samurai Shodown, but the few that I got to have ran flawlessly. Something to appreciate about the way Samurai Shodown treats its online mode is that it let’s players choose what they consider their skill level to be, letting them work their way up through the ranks from wherever they place themselves. An interesting use of Samurai Shodown’s online is “Dojo Mode”. In this mode, players take on an AI opponent that learns through battles. Players can then fight other people’s ghost AI in challenge modes. If the game’s userbase makes use of this mode, it could be a fun way to practice but again, it won’t feel much different from any of the other modes available.

Samurai Shodown sought out to revive this long dormant franchise and I think it has a fair shot at doing so. At its core, Samurai Shodown is a high-quality fighter with enough differences to make it stand out among the crowd. I only hope that in the future, SNK is able to create more around this core fighter by providing enough content to keep players who don’t intend to enter tournaments feeling satisfied.