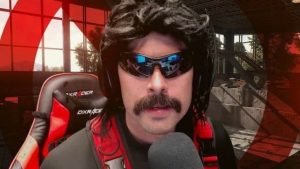 Dr. Disrespect, whose on-screen persona is meant to match his nickname, was attending California’s E3 convention when, on the show’s first day, he and his cameraperson live-streamed him entering a bathroom. Tens of thousands of viewers watched him walk past bathroom-using attendees and go into a stall – which was apparently a violation of Twitch community guidelines. Twitch suspended him as a result, and E3 revoked his press badge.

The bad doctor didn’t seem to take his ban very seriously, as evidenced by him posting an E3 recap video he described as “Mishaps lead to Recaps,” and posting emotes of himself in a bathroom stall. Last night, Twitch reinstated his channel and fans are pumped to see his return. Dr. Disrespect hasn’t streamed yet, but his chat is full of excited viewers anticipating his next stream.

Twitch declined to comment on this matter and Dr. Disrespect has not yet responded to press outlets. We’ll probably hear from him soon.