Cyberpunk 2077 Reportedly Will Not Have Morality Mechanics 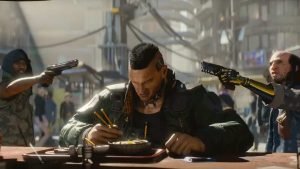 CD Projekt Red has clarified that there will be no structured Morality system in Cyberpunk 2077, only consequences for actions.

Quest director Mateusz Tomaszkiewicz told GamingBolt that non-lethal playthroughs are just that; non-lethal playthroughs based on player choices, stat distribution, and equipment. The game will keep track of the results of your decisions in the story, but it won’t do so with any kind of good-and-evil point system like many games in the past have done.

The Witcher 3 also operated like this, doing its best to make sure there was never a clear “right answer”. Its success likely ushered in an age where that sort of less rigid approach to morality in games became more common.

Cyberpunk 2077 is out on April 16th, 2020 for the PS4, Xbox One, and PC. Though the developers would eventually like to have the game on next-gen systems, Tomaszkiewicz also told us that CDPR has no current plans for that or a Switch release.

The post Cyberpunk 2077 Reportedly Will Not Have Morality Mechanics appeared first on CGMagazine.

Cyberpunk 2077 Reportedly Will Not Have Morality Mechanics