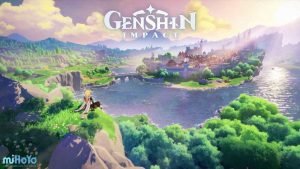 Having entered closed beta last week, Genshin Impact intends to follow in The Legend of Zelda: Breath of the Wild’s sandbox adventure footsteps.

Coming from Chinese mobile developer miHoHo, best known for their stylish anime beat-’em-up Honkai Impact 3rd, this PC and mobile title is a radical and ambitious departure from what you’d normally expect out of their sort. Looking to adapt the manga of the same name, players… uh… I don’t actually know anything about the game’s story. The manga is officially translated, so you can find it via the official website should you want to jump in and experience it. The fact of the matter is that BOTW fans will get another chance to explore a wide-open world filled with monsters and treasure, so it’s worth taking a look at what Genshin has to offer.

Judging by the trailer and beta footage, the game is very similar in mechanics and setup to BOTW, featuring protagonists who can climb on anything as long as their stamina holds, not-Bokoblins in not-Bokoblin camps, slimes that definitely aren’t just Chus, a similar bright, cell-shaded palette, and what looks to be a distant tower in one screenshot. Cooking also returns, which is always welcome.

As for what’s different, the combat for the sword-wielding lass in the beta looks snappier than what BOTW had to offer. That’s surprising since, you know, this is coming from a mobile studio. Also new is character-switching, with the beta providing eight characters with different gameplay styles. There’s populated cities, JRPG-esque cutscenes, and… an on-rails third-person shooter boss fight against a dragon? Sure, put it in.

Having a bunch of anime girls (and guys, I presume) wandering the wilderness and scaling mountains will come off as a bit aesthetically odd, but it’s a small price to pay for a good-looking PC game that’s following in Breath of the Wild’s footsteps. Genshin Impact is currently in closed beta on PC and Android/iOS, and you can sign up for it on the official website.

The post Genshin Impact Looks To Borrow Breath Of The Wild’s Magic appeared first on CGMagazine.

This post first appeared on CGMagazine, please read the originial post: here
People also like
T-shirt col rond à message 10-18 ans
9 Tips for Writing an Engaging Resume
Booty Bay Slot from Push Gaming
Hiking the Cinque Terre: All you Need to Know
Dead Ends in Cryptanalysis #2: Timing Side-Channels
Why Bitcoin Crashed – Is it Safe to Invest In Bitcoin In 2021?
How Does the Fortinet Firewall Work?