The original Crash Team Racing came out way back in long-long ago, the Matrix-fueled craziness of pre-Millennial 1999. A lot has changed since then, especially in the world of video games. Consoles are most beastly than ever, and televisions are far larger with definitions so crisp you could make a sandwich out of them.

However, one thing that hasn’t changed is how much fun can be had with a simple Kart racing game and a few of your friends. Crash Team Racing Nitro Fueled is more than a simple remaster of a classic game. It’s fully revamped for the HD era and absolutely crammed with content, both classic and new. More characters, more tracks, an expanded battle mode, AI racers, and of course, a robust online mode. CGMagazine caught up Thomas Wilson, Creative Director and co-studio head at Beenox, to chat about the game and what will be returning and what new content is headed our way when the game drops on June 21st.

Thomas Wilson: SO much. Where do we start? Crash Team Racing Nitro Fueled is of course the re-mastered verison of the original game Crash Team Racing which came out 20 years ago. We have all the same characters, same cool driving mechanics, same track layouts. We haven’t touched any of that. But from there, we have so much new content coming in. First: online. Now we have the online mode which was not present in the original game. Second thing is the way we remastered it visually speaking, because although we haven’t touched the layout of the tracks we definitely added personality to every level. We wanted to tell a story in every level you’re racing on. Although it’s a racing game, there is humour added, a lot of animation and life has been added. The more people race the more they will discover new things and details like easter eggs here and there. The graphical fidelity was improved. Just the characters themselves are now fully rigged and fully animated so we can have fun with them, when you win, when you lose, when you get to a podium animation, when you cross the finish line…we can now play with the animations and inject a lot of personality into the characters themselves.

We’ve also introduced content from Crash Nitro Kart as well. You’re getting all the content from CTR but also all the characters and bosses from CNK. You’ll get all the tracks and also all the arenas from the battle mode and all the tracks have been adapted to CTR controls because they were not exactly the same game. On top of adding this content from CNK we’ve also added customization—just for the fun of it, it won’t influence your performance—you can dress up your character and kart just the way you like, we have multiple bodies, decals, stickers, paint jobs and we also have character skins that will give you custom animations on the podium.

Last but not least, what we’ve announced at E3 is the Grand Prix, which is seasonal content which will be added after launch—free, for everyone—and for every Grand Prix we introduce a brand new track, not a remastered edition but brand new content designed from the ground up. There will be new karts and new characters, we just announced the Nitro Squad, not only that but people have been asking about the trophy girls and now they are characters you can race with.

CGM: How often will these be?

TW: We haven’t actually revealed how the flow will work but we’ve announced at least three Grand Prix already and the first one is called Nitro Tour. It will feature a track called Twilight Tour which takes you through ancient Egypt by night and Persia by day. The second Grand Prix will be called Back in Time and the track is called Prehistoric Playground, so we’re going back in time to the dinosaur age with a prehistoric Crash community, which should be fun. Of course then there’s also the Spyro Grand Prix as we finally announced that Spyro would be a character because people have been asking for him forever. As we go on there will be more and more surprises.

CGM: How many tracks will be available at launch?

CGM: You’ve brought back the battle mode. What can you tell me about it?

TW: What’s interesting is that the original game had what we called Limit Battle, so it was very straightforward, you use powerups to defeat your opponent, you have a time limit and then the one who scores the most wins. CNK also introduced a few varieties in terms of battle mode, like Capture the Flag, and Crystal Grab which puts crystals in the arena and people have to collect them and fight for them. When you hit your opponent crystals get lost and you can grab them and the one that has the most crystals at the end wins. We have Steal the Bacon which is sort of a modified Capture the Flag where you’re actually fighting for just one flag. Finally we have Last Kart Driving, so as you’re battling if you lose all your lives you’re out. The very last Kart driving is the last person standing in the match. There are multiple battle modes to play with and you can always customize which powerups you want in each battle mode and because we’re including all the arenas from CNK you will get a total of 12 arenas to play on. 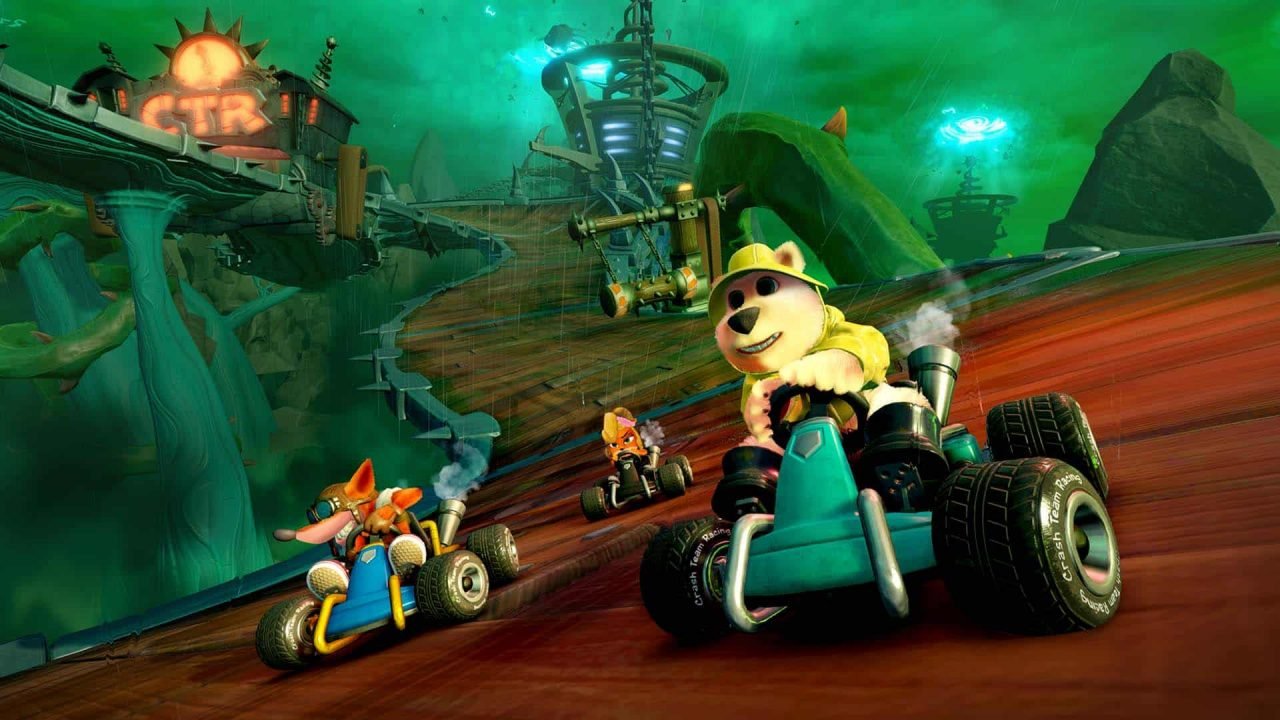 CGM: What platforms will the game be available on?

TW: The game comes out on June 21st on all platforms, Switch PlayStation 4, and Xbox One.

CGM: Must be nice not being locked into just Sony anymore.

TW: It’s great, the more people that are playing Crash Team Racing: Nitro Fueled, the better, because I think it’s a fun game and having it available on all platforms is perfect. There will be no cross-platform play, just specific to each console. There will be local multiplayer of course, that’s sort of the foundation of the original game. You can play 4-player split-screen, and one thing we’ve added was AI for the battle modes so you can play with AI opponents if you’re just by yourself. The original game only supported [human] players. Now you can play with multiple players, as well online you can play battle modes with up to eight players. We’ve added a lot of things.

This post first appeared on CGMagazine, please read the originial post: here
People also like
Biden’s Ambitious Global Climate Agenda Is In Peril. Can He Save It?
A1 Supplements – Elite Lean
Best Vitamins for Memory and Focus in 2022
Get The Inside Scoop On How To Build A Successful Startup
Seven Reasons Why Fast Hosting Servers Are the Way to Go
Most popular jewellery this Christmas - 2020 edition
Natural DHT Blockers That Actually Eliminate Hair Loss