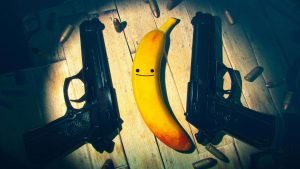 Devolver Digital caught me completely by surprise back in 2012. While they had been around for three years prior, I had not heard of them until I played the cult-classic Hotline Miami. Since then, Devolver became, in my opinion, the Nintendo of indie games—putting a name on so many amazing indie games that their very name became synonymous with quality; and don’t even get me started with their past three E3 presentations.

My Friend Pedro: Blood Bullets Bananas is the latest offering with the Devolver seal of quality on it: offering a unique take on the side-scrolling shoot ‘em up that challenges you to channel your inner John Wick. 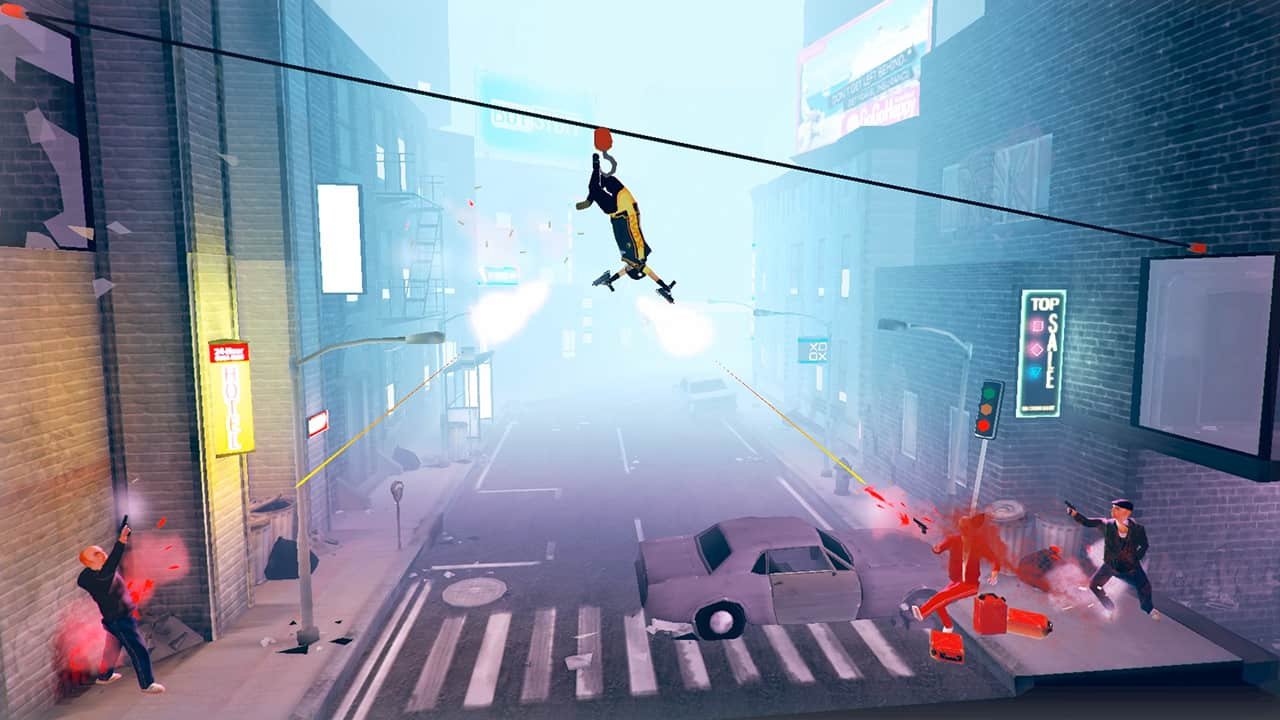 Developed by DeadToast Entertainment, My Friend Pedro greets the player to a floating, sentient banana with a drawn-on smiley face. This is the titular Pedro, and he guides the player, who takes on the role of a nameless murder machine in a gas-mask, through a marvellous adventure of intense gunplay. Like a lot of Devlover published games, the game is not heavy on plot, combining the real and surreal to consistently keep the player guessing as to what’s really taking place.

However, the story is on incidental to LITERALLY EVERYTHING ELSE. My Friend Pedro is an absolute romp; think Not a Hero meets Max Payne. The goal of each level is to kill every bad-guy in as stylish a fashion as possible and there are no shortage of awesome ways to do this. One moment you may be diving through the air, firing between two guys; then you’re rappelling down a rope, spraying bullets as you spin like a ballerina to dodge incoming fire; then you’re ricocheting bullets of a frying pan you suspend in mid-air with gunfire. 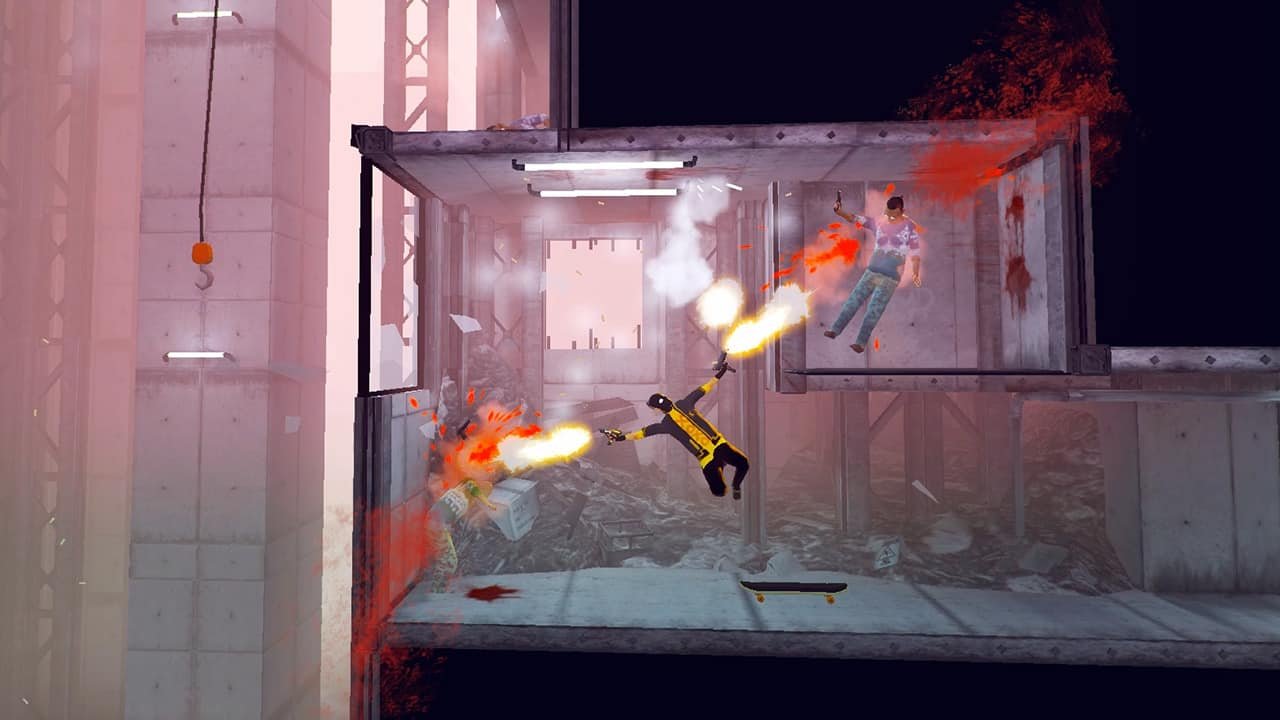 It absolutely…well, bananas! And it all may sound way too crazy to keep track of all of that, much like the aforementioned Max Payne, players can activate bullet-time to give them that extra edge to pull off some insane kills. However, that doesn’t mean you should take your time, as each kill adds to a combo meter, building your score for that level. This only serves the arcade purpose of increasing your level rank, which if you’re anything like me, will add a lot of replay value to each level as you strive to pull off something higher than a C-rank— no matter how cool you thought you were.

My Friend Pedro uses a minimalistic visual style that keeps things simple while still maintaining a lot of small details that add to the game’s personality. Each level has a nice pastel colour palette which makes the bright primary colours of the characters pop out. The visuals are backed by a fantastic 80’s synth soundtrack—in traditional Devolver fashion—that adds a lot to the overall feel of the game. 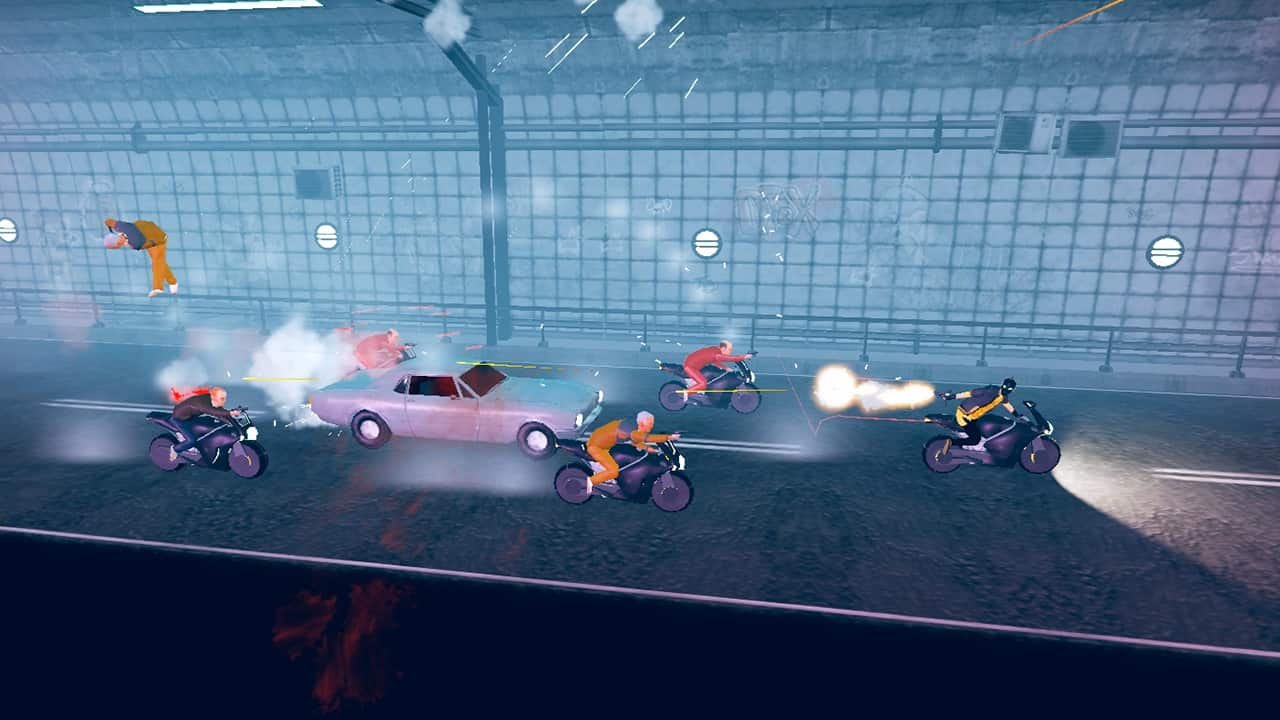 I have one minor issue with the game, and it may have more to do with the Joy-Cons than the game itself. Bullet-time is mapped to the L3, and given the Joy-Cons minimal stick-movement range, it’s very easy to turn it off when attempting to split your aim. While it is possible to change the button layout, I felt it hard to find any other meaningful placement given the game’s requirement for using both sticks.

Also, sometimes the game’s wonky physics can get in the way of your attempts to pull off cool moves–namely, trying to kick people or objects if your legs aren’t lined up with them. This may seem obvious, but I found it a little annoying that a game this crazy would start drawing reality lines at where your legs are. 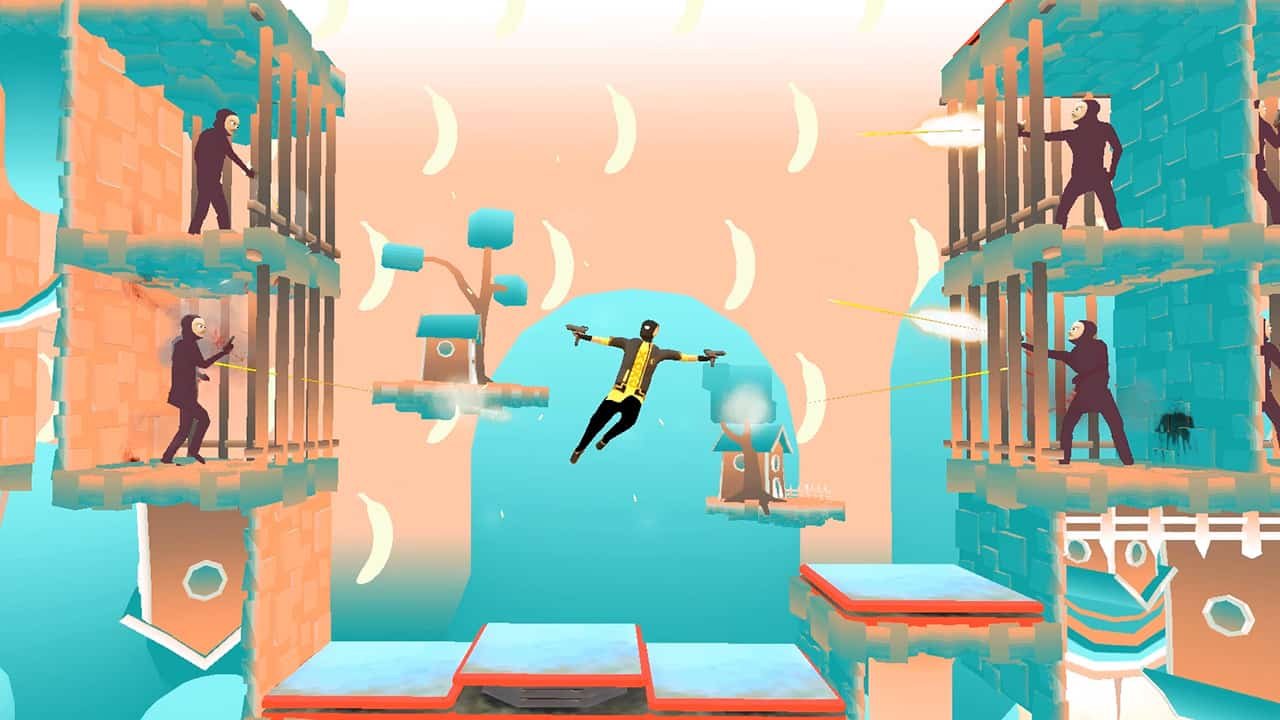 However, those are just little drops in an ocean of a good game. My Friend Pedro is a ridiculously good time; challenging, stylish, incredibly fun and endlessly playable. Do yourself a favour and make this game YOUR friend.

This post first appeared on CGMagazine, please read the originial post: here
People also like
Experience Ultimate Relaxation Together: Discover the Benefits of a Couples Massage on Your Next Resort Trip!
Why SEO Is The Next Big Thing in the Real Estate Industry
جمہوریت ڈرامہ
Telegram Marketing solutions
Pineapple juice benefits for skin
Selling Handmade Products on Etsy
Natural Remedies For Common Health Issues
Portfolio Review: Happy Birthday, Paramount+!
Medical Equipment for Molecular Diagnostics Lab
Comparison Between The 3rd Ranked & 2nd Ranked Framework: Flutter Vs Angular
This Is What You Should Do If You’re Laid Off