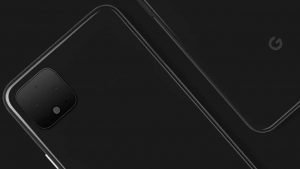 The Pixel 3 was leaked to infinity, with full retail versions being sold in-box across Hong Kong and Russia weeks before the device’s initial debut. This year, however, it seems as if Google is tired of playing the leak game, instead choosing to unveil its upcoming Pixel 4 in what was a move that left more questions than answers.

On the company’s official Made By Google Twitter account, the Pixel 4 device was not only said to be coming, but our first look at the device was given months ahead of Google’s typical October release schedule.

Through the picture, the Pixel 4 seems to contain a Triple Camera Setup in a square formation, much like we saw with Huawei’s Mate 20 Pro. This would not only be the company’s first leaving the single-camera market but offers confirmation that proves that the Pixel 4 and Apple’s upcoming iPhone 11 (or what we have seen of it through 3D Models) may not look too different after all.

Other than its triple camera formation, no other information was publicly stated through the company’s twitter post. However, in a move much like last year’s Pixel 3, an early retail version of the Pixel 4 was spotted in London, and according to the original source, the device’s front features a “large forehead” which may not prove too different from last year’s.

But as great as it is to have early confirmation on Google’s new advice, it does not answer exactly why the company chose to unveil before its usual Pixel debut in October.

Could this be the company’s way of hinting at an early release? Was Google bothered by last year’s slew of leaks? Does the inclusion of a triple camera setup really drive potential Pixel 4 hype? Or does the company simply want to compete with this year’s iPhone ahead of time?

Not a whole lot is known, and in the end, it will be interesting to see what other information the company has to unveil before Google uffocially releases its Pixel 4 into the market.