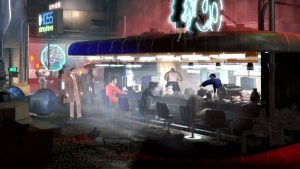 Hailing from Command & Conquer’s old studio, this niche game chronicled the story of rookie cop Ray McCoy and his adventures that run parallel to those of the original film. For those who know about it, it was well-liked for capturing the spirit of the original film. Tragically, it has been mostly unplayable for many years, but that’s where ScummVM comes in.

Scumm developer Peter Kohaut has put out a call for people to test its Blade Runner support, presenting options for both the original game (now with subtitles) and a version with assorted restored content that is slightly farther behind. ScummVM takes data files and runs them in a rebuilt environment that avoids technical issues games have on modern versions of Windows. It was originally built to run old LucasArts games, and it currently supports a wide variety of adventure titles.

The Blade Runner game is tied up in too many legal strands for an official re-release to happen, but Night Dive Studios, the current owners of System Shock, have expressed interest in reviving the game in the past. Still, even if the game’s future is unclear, at least we can play it again here and now.