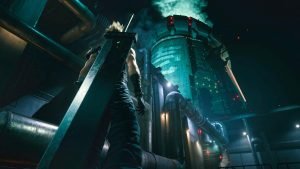 Since its announcement four years ago at E3 2015, much about the highly anticipated Final Fantasy VII Remake has been left to the anxious imaginations of its fans outside of some hints as to what it could look like from a few cinematic trailers.

The lack of information and constant delays throughout the project—not to mention the loss of work when CyberConnect2 left the project four years in pushing back development—had many of us worried that the game would never see the light of day. So it was no surprise that the Square Enix Press Conference E3 2019 opened with a half-hour of all things Final Fantasy VII Remake, including a full-length version of the cinematic trailer that was teased a few days before and an in-depth look at the actual gameplay—a move by the power-house publisher that not only served to quell our fears over its release, but demonstrate that Final Fantasy VII Remake will be exactly what fans hoped it would be and more.

In a closed-doors presentation hosted by Final Fantasy VII Remake Producer Yoshinori Kitase, a room full of journalists were given a more detailed look at the development philosophy and a deeper dive into the combat system. Kitase stressed that this iteration of the game would not simply be a shot-for-shot upgrade with modern development technology and graphics enhancements. Instead, the team challenged themselves to bring the Final Fantasy VII world to life with more emphasis on the characters and the world itself. 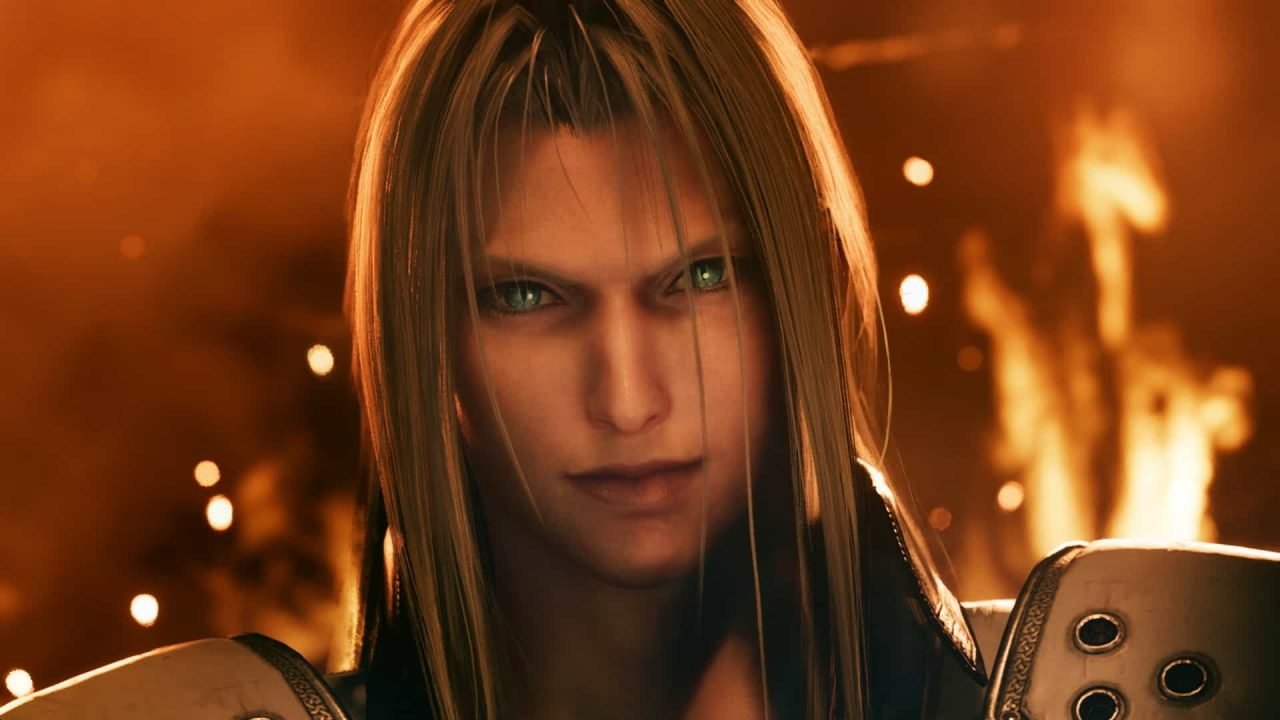 As the some of the original development team behind Final Fantasy VII are overseeing the remake, including Kitase, Director Tetsuya Nomura, and Scenario Writer Kazushige Nojima, “Just simply recreating the game with new graphics, it wouldn’t have been enough to get them excited and really on board and invested in the project,” says Kitase. “In order to return to Final Fantasy VII they really wanted to go beyond the original to tell that deeper, more involved story.”

And for that deeper story to be told exactly the way the development team intends to tell it, a “massive amount of work and a huge volume of data” will be needed. With the first part of the game releasing on two Blu-ray disks, and the entirety of the game itself coming to fans in an undetermined number of sections, Kitase was quick to note that during the first part’s development, the team is also “starting now to continue planning and outlining the overall content of the second one.”

As a result, Final Fantasy VII Remake will see more integrated cut-scenes that transition fluidly between battles, giving us insight into the relationships between characters. While the maps presented during the presentation and the hands-on portion of our meeting were accurate representations of the original game’s maps, we will now be able to visit areas of those maps that were mere abstractions hinted to the player, creating a more vast area to explore.

The first part will focus solely on the city of Midgar, which fans will remember as a dark, dreary city dominated by a central MAKO power plant that converts MAKO—the planet’s life source energy—into power for the world’s citizens. Keeping true to their mandate, the team has taken inspiration from the Midgar familiar to us in the original Final Fantasy VII and through the use of vivid colours and dramatic lighting effects have created a dank, modern steam-punk environment, punctuated with familiar details we only wished we could explore in the original game as well as some other surprises to keep things fresh. Coupled with new, but true to the original imaginings of music from Final Fantasy VII, the Midgar and MAKO reactor we created in our mind seemed to come alive. 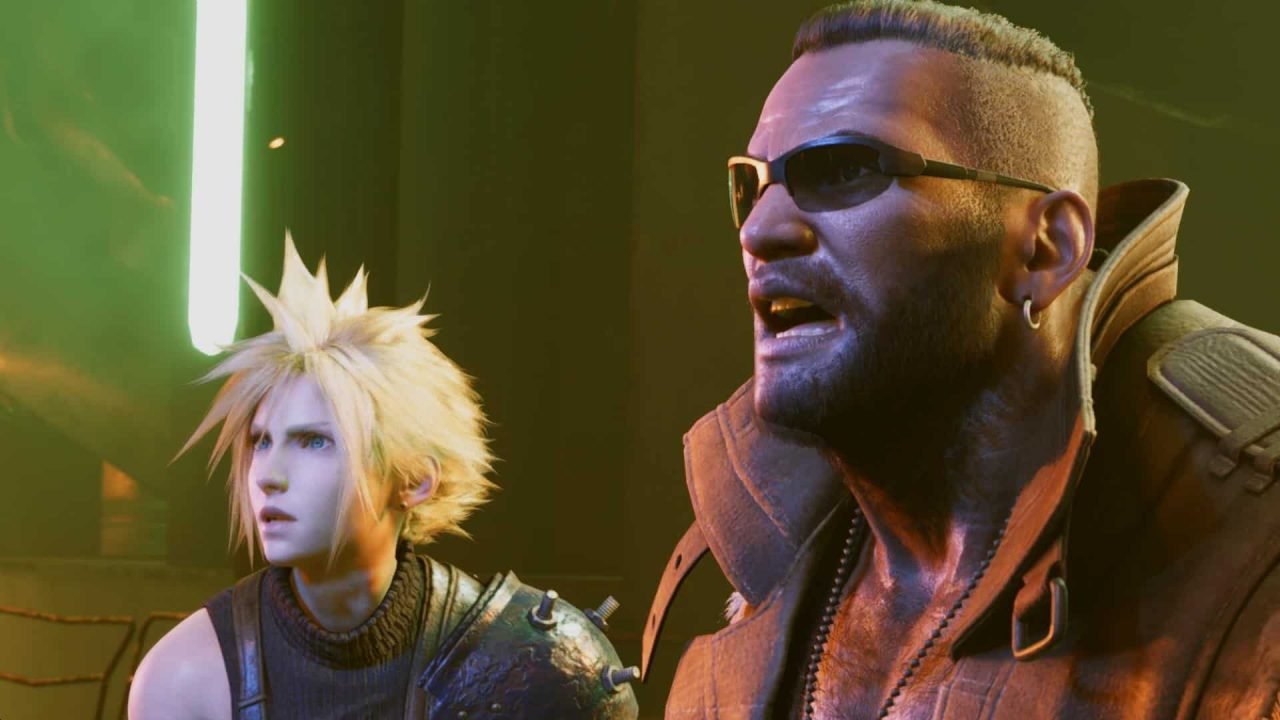 It is here where we take on the role of Cloud Strife, former Shinra Soldier turned mercenary, and Barret Wallace, Eco-Terrorist and leader of the mercenary group AVALANCHE. The pair, along with Jesse, Biggs, and Wedge, the AVALANCHE members from the original who have a noticeably more prominent role in Final Fantasy VII Remake, make their way through an area leading up to the reactor room. Traveling through the map felt nostalgic and familiar. Even in the new 3D environment, it was clear how closely the team stayed to the original Final Fantasy VII map design. But, as this is not a one-to-one update, the team has gone bigger, adding rooms and areas that were only alluded to, but not explorable, in the original game and bringing new depth to exploration—as if the incentive to uncover treasure chests (which of course, had to return to the game), and breakable objects as the completionist in all of us search for items, material, and equipment was not enough.

As Cloud, voiced by a newcomer to the franchise, Cody Christianson, and Barret, voiced by another newcomer, Eric Bently, climb ladders and explore the area, we get snippets of the dynamic relationship through fully voiced side conversations and seamless cutscenes. Anyone who played the original will know to expect some very emphatic speeches from Barret about the importance of their work—expect a lot more of that. Bently does an excellent job of bringing Barret’s passion for saving the environment to life, while Christianson plays a convincing blank-slate mercenary; cold and apathetic to the cause.

After a little exploring and uncovering a chest to receive a Phoenix down, we have our first enemy encounter. It is here where we get to explore this new hybrid active battle system that blends combat styles from the original game with action-based attacks and defences. With a tap of the square button, Cloud launches a basic Buster sword attack, blocks oncoming attacks with R1 and evades with circle. We also see a return of the ATB gauge for each playable character which fills bars as time passes, attacks land, and damage is taken by the character. Pressing X will slow down the battle and conjure up an in-battle menu, similar to the ones found in classic turn-based RPGs, with a shiny, new UI. Here, you can select skills such as Cloud’s Braver attack, magic, and items. Every move in this state uses ATB points—including the use of items—while magic consumes MP. It should also be noted that while not present in the battle, those who wish to go full-throttle action game can also map skills, eliminating the need of the in-battle menu. Through a series of action attacks and menu skills and magic, players will find themselves using tactical creativity a lot more than they imagine. Add to the mix the ability to switch characters—in this case to Barret with his long-range and charged attacks, area attack skills, and Thunder magic—each battle felt fun and fresh, even with the limited enemies that spawned on the map. 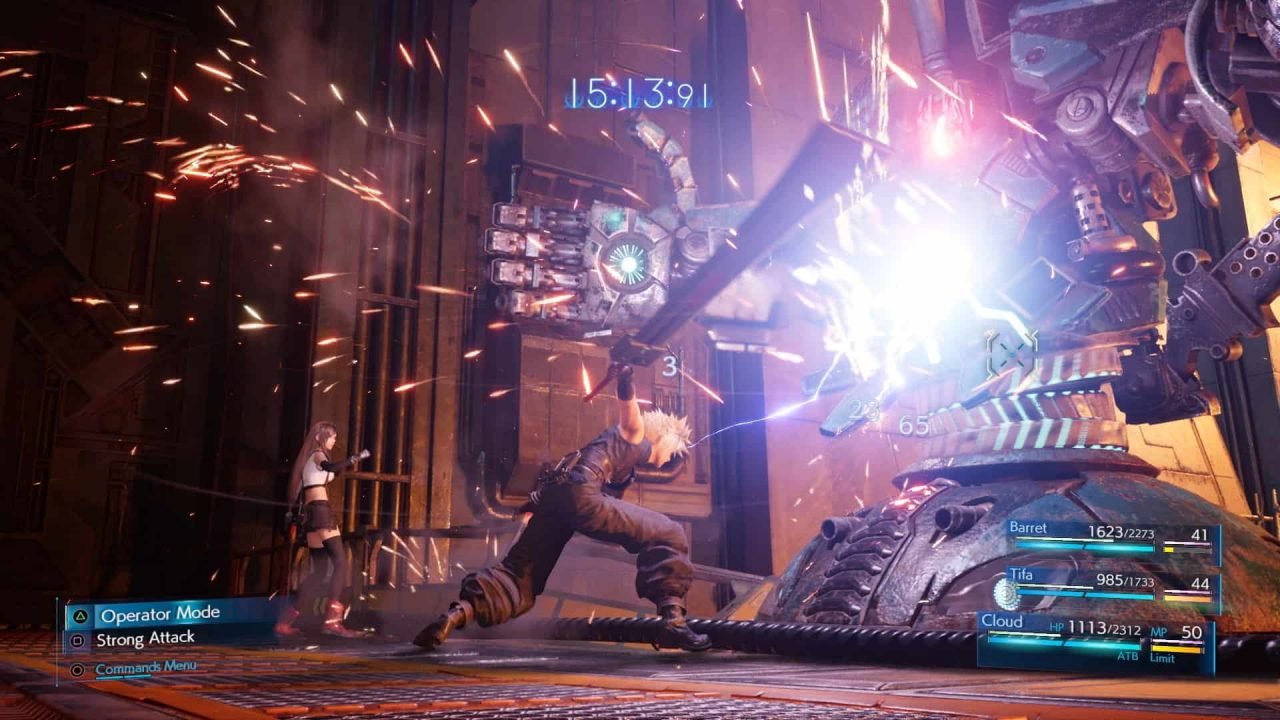 While only present in the presentation, each character also comes with a set of special attack stances and skills. By pressing up or down on the D-pad you can cycle through different stances, such as Cloud’s Operator mode, which gives him the speed and agility for quick movements on the battlefield, or his Punisher mode, which truncates his speed but also empowers him with stronger, more devastating attacks. Throughout the battle, whichever character is not in play will act as an AI ally, attacking enemies as needed. As a side note, it would be nice to see some sort of party command system, similar to what we saw in Final Fantasy XV, to better utilize every character in your party when not controlled.

Moving past the first enemy encounters leads Cloud and Barret to the Number 1 Reactor and their first mini-boss encounter, the Guardian Scorpion. Like the boss in the original Final Fantasy VII, it is a powerful mech that goes through several phases inter-spliced with seamless cut-scenes between Cloud and Barret. It contains many of the same attacks as the original, such as the Search Scope, which locks a target on your character and cancels any evasive action against attacks, the Rifle attack, which sends a barrage of bullets in the player’s direction, and the deadly Scorpion Tail attack with its devastating laser. Taking advantage of the new active combat, barriers appear on the field to sport some protection as you evade and guard against the deadly onslaught. Additional enemies are also released on the field, so you’ll find yourself switching between Barret to capitalize on his Thunder magic and Cloud to take care of the pesky enemies as they spawn.

Final Fantasy XIII introduced the Stagger State to the franchise, which makes its return in Final Fantasy VII Remake. By attacking the enemy with basic quick attacks filling an enemy’s Focus Gauge (found conveniently underneath their HP bar), you can force them into Stagger, allowing you to increase the damage dealt for a limited amount of time. Which is a great time to bombard them with a Limit Break—the extremely powerful attacks accompanied by the dramatic (and now enhanced) cut-scenes we all loved from the original. 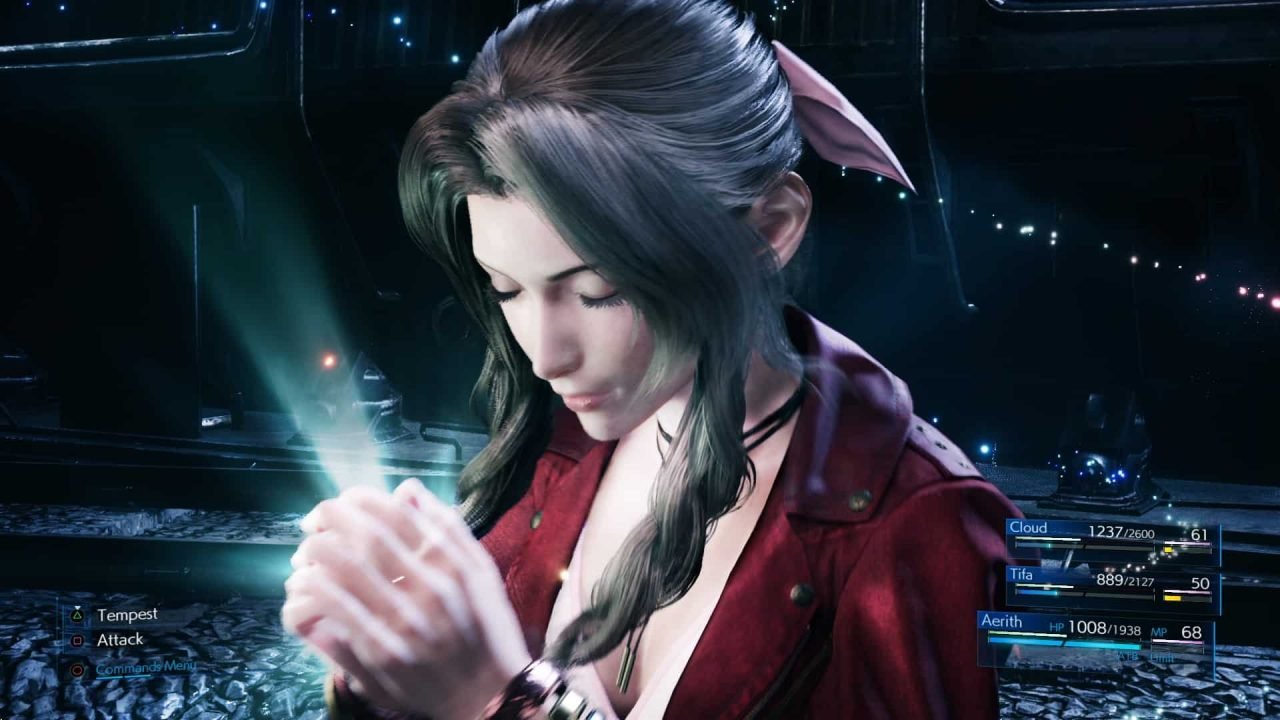 Overall, this playthrough quelled any fears that the long development of Final Fantasy VII Remake had instilled in me. The section I played on its own gave me the deeper, richer version of Final Fantasy VII that I and so many other fans were hoping for. While I did at one point experience some wonky camera angles as I was exploring the passages to the reactor, the combat felt smooth and fluid, and having the option to pause as you select skills and plan your next move was not only a wonderful call back to the turn-based battle system I enjoyed with the original, but a clever way to integrate skill-heavy combat with an action-based system. I am anxious to see more in terms of the rich story and character development promised by the development team, but if what was shown in the demo rings throughout this first and the rest of the instalments, I am hopeful. We will have to see as more information is revealed towards its release on March 3, 2020 for PlayStation 4, but at the very least, I like the direction Final Fantasy VII Remake is taking so far.