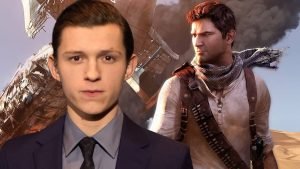 Sony’s Uncharted movie has leapt to a holiday December 18th, 2020 release with Tom Holland in tow.

This adaptation of the best-selling video game franchise will star Holland as treasure hunter and man-of-action Nathan Drake. An Uncharted movie has been long in development, with reports coming in two years ago that Holland was joining the project. The latest Spider-Man portrayer seems a bit young for the grizzled role, but he likely has the talent to pull it off. In January, the project saw 10 Cloverfield Lane director Dan Trachtenberg come aboard, following the exit of filmmaker Shawn Levy.

The latest draft of the screenplay adapting the Naughty Dog’s franchise is coming from Jonathan Rosenberg and Mark Walker. There is little word on how closely the film will draw from the game franchise it is based, but with over four titles deep into the series, there is plenty for the filmmakers to pull from. Uncharted is going up against Steven Spielberg’s big-budget West Side Story remake, which Fox is opening the same day. But with both hitting very different demographics, there is little worry about the cannibalization of each other’s audiences.

The Uncharted movie, assuming nothing goes wrong, will be releasing on December 18th, 2020.