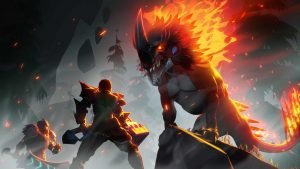 Dauntless has changed greatly over the years, for the better I might add. Phoenix Labs monster hunting co-operative action RPG was originally announced way back at The Game Awards 2016, and in the time since I’ve played it on and off through events, alphas, and betas. Combat has been tweaked, additional Behemoths (Dauntless’ name for the giant monsters you kill) added, and loot boxes all together eliminated. Yet through the years, unlike it’s more famous inspiration, Monster Hunter, it never really clicked for me no matter how often I played.

That changed at PAX East 2019, when years of adjustments finally made Dauntless many pieces fall into place for me. The convention would be the last time Dauntless would be shown at an event before it launched on PlayStation 4, Xbox One, and the Epic Games Store on May 21st. Here, equipped with the game’s first ranged weapon called the Ostian Repeaters, I felt that warmth that drew me into the genre in the first place with each Behemoth I took down. What was once sluggish is now responsive and intuitive. What was once empty and lacking of variety is now wondrous to explore. And what was once bland, now sinks its claws into me and refuses to let go. 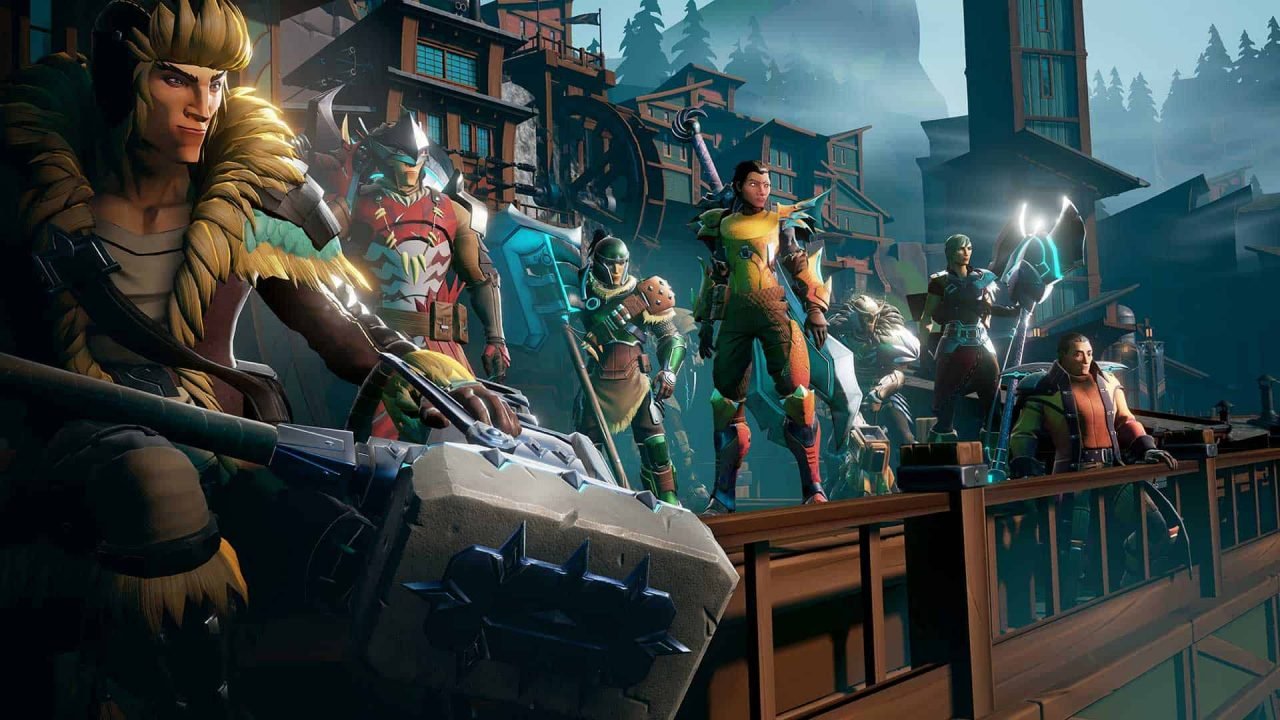 Dauntless’ development has been, as Phoenix Labs Co-Founder and Chief Strategist Robin Mayne puts it, “a learning process.”

“We often resurrect early videos or builds of the game internally just to look at how far its come,” Mayne tells me. “We’ll hit a specific anniversary and we’ll look at where we were a year ago on this day or two years ago on this day. It is amazing how much [Dauntless] has changed. And the fascinating thing to me is we still feel like we’re just getting started. The team is humming along. We’ve learned a ton about what Dauntless is, what players want and how we can best serve that opportunity.”

When Phoenix Labs first began development on Dauntless in late 2014, its first project after the developer’s founding that same year, Monster Hunter and the hunting genre at large had yet to truly capture a large audience outside of Japan. Despite having a few console releases under its belt, the franchise was best known for its portable releases. Four years later, and Monster Hunter World quickly became not only the best selling game in the franchise, but the highest selling game Capcom has ever made. 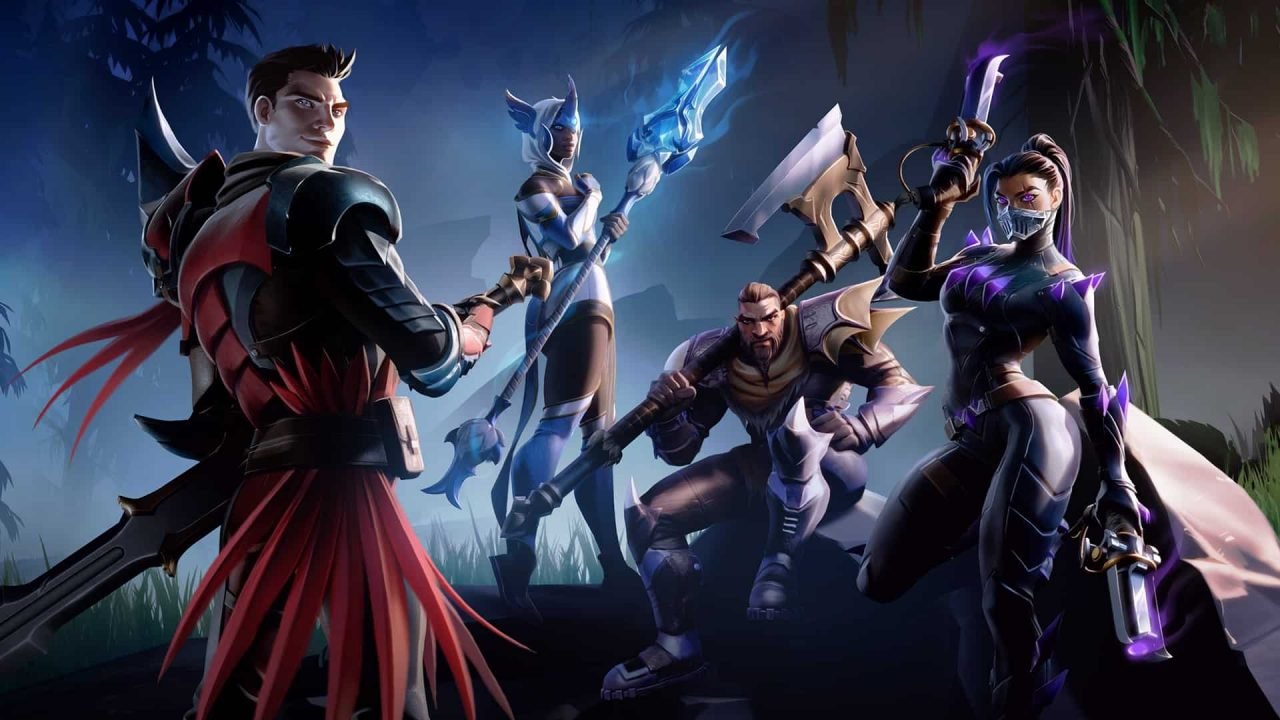 Yet outside of Monster Hunter and God Eater, there aren’t a lot of games in the still nascent hunting genre. It is in this gap that Dauntless arrives— a free-to-play alternative to Monster Hunter that boasts the same core mechanic of killing giant beasties with big weapons, lacking only the years of iteration that allowed for Monster Hunter World to be as big of a success in the first place. For his part, Mayne states that even before Dauntless was announced, the team viewed it as not a direct copy of Monster Hunter, but as a new twist on the formula.

“One of our core beliefs was the idea that you could take something like Magic: The Gathering and make a Hearthstone,” Mayne said. “You take Everquest and you create World of Warcraft. You take Dota and create League of Legends. There are really awesome games out there that tend to have really passionate followings even if they’re niche because that gameplay really resonates with an audience out there, and it could likely reach even more people.”

Dauntless sets itself apart from Monster Hunter from the get go. It is much more stylized than Capcom’s franchise, which has a muted colour palette in comparison. Lines are used to greater emphasize characters and Behemoths, with vibrant colours serving to add a cartoonish layer to the action. It is also much simpler, at least at first, with a smaller selection of weapons that have easy to use combos and special attacks.

While it’s difficult to truly change a genre’s core mechanics, Dauntless’ biggest improvement in that regard lies in the Behemoth’s themselves. When I first hunted one down years ago, they felt ordinary, lacking in either their design, their mechanics, or both. That has fortunately changed, as newer Behemoths liberally take inspiration from genres that few would look at and think would make for good additions to an action-RPG. 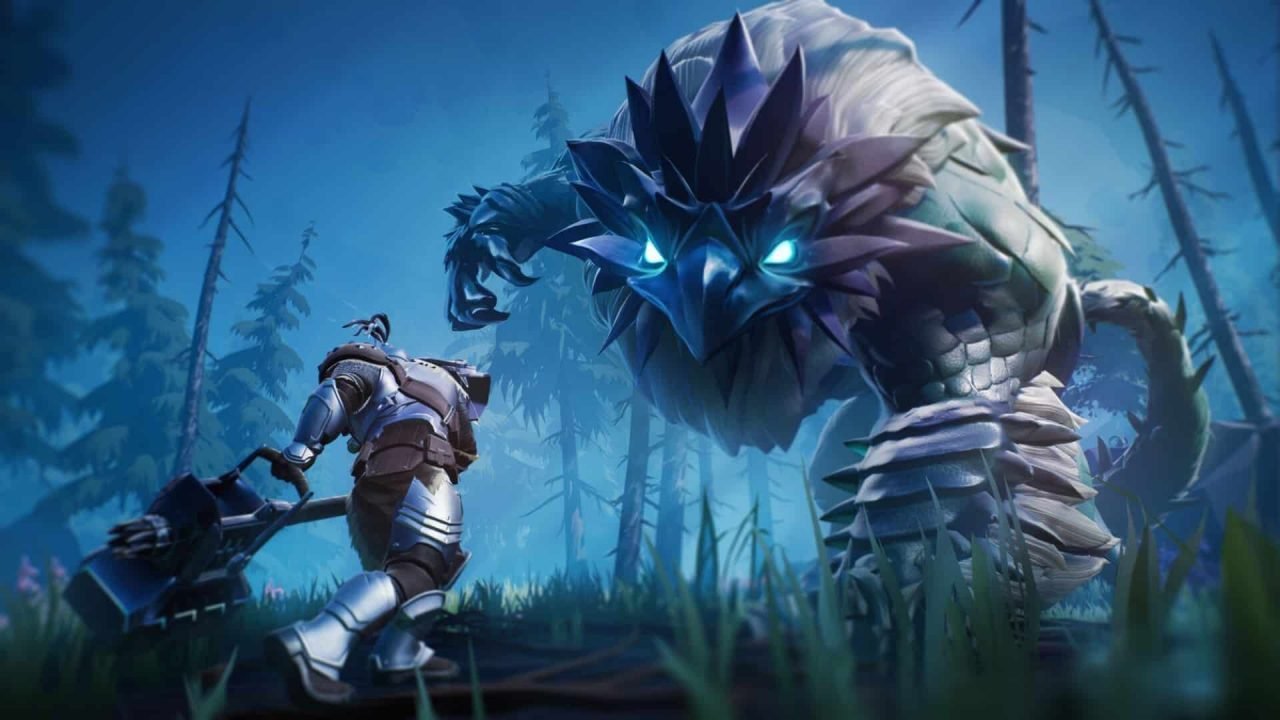 “One of the Radiant Behemoths is called Rezakiri,” Mayne explains. “It’s a big dragonfly-type thing that some people have called the disco bug because it has a laser light show that plays like a bullet hell shooter in the fight. And that’s not normally something you would see in a more realistic game, where it wouldn’t make sense in that type of world. But because we’re more stylized, it fits well, and we’re always looking to experiment with that.”

The Behemoth I faced in my session, Boreus, could spawn packs of minions that players could kill in order to gain a buff to break through the boss’ shield. Another has the ability to open up portals that it could travel through to either escape or strike from unsuspecting angles. The result is that few fights feel like reskins now, creating a more exciting and diverse world that is worth investing time into.

It’s a far cry from the original state of Dauntless, which was rough around the edges to say the least. Mayne credits Phoenix Labs commitment to continually evolving Dauntless at every step of its development by utilizing feedback from even the earliest alphas in order to keep it from stagnating.

“We’ve pushed a lot of features and types of content to players as early as we could,” Mayne said. “Even our Alpha launches were open, which are sometimes uncomfortably early, but that’s the right thing to do as a developer. Because if you’re in beta for a week prior to launch, you’re not going to be able to take any of that feedback to do anything about it. You have to be reflective and kind of learning those lessons.” 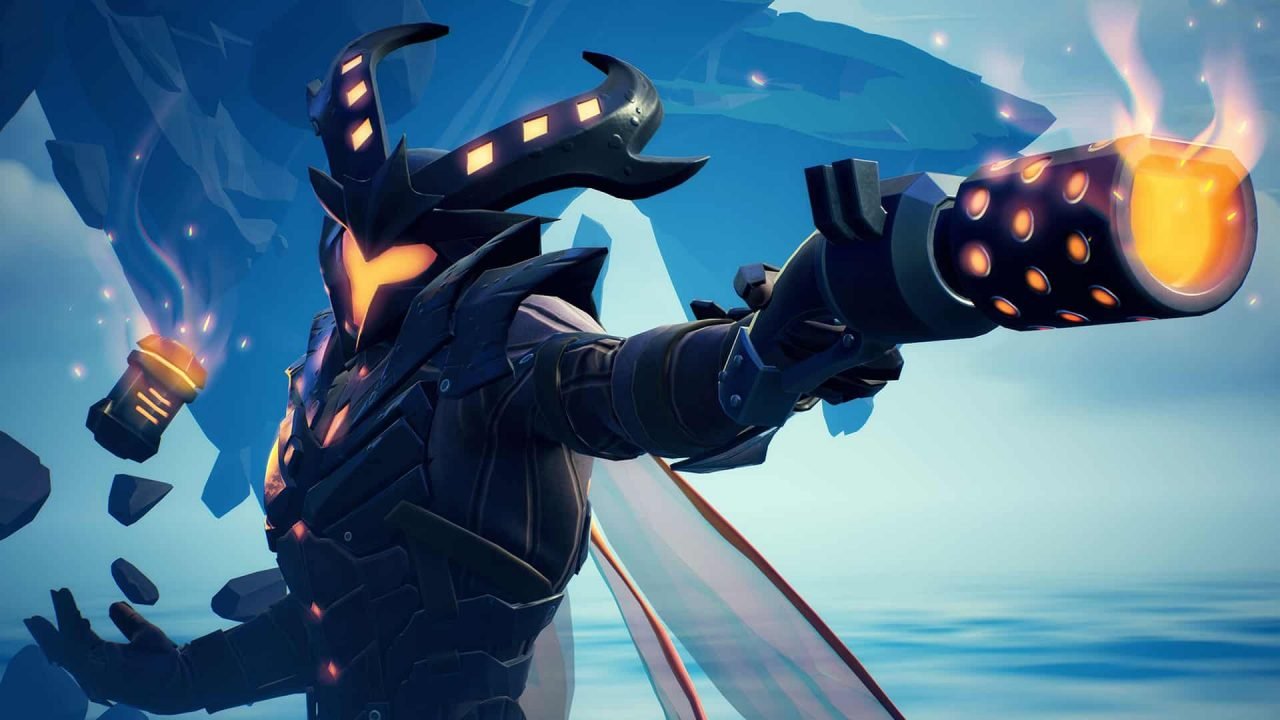 “We’re fortunate, because we are a very fast iterating studio, so we can react quickly to things that we’re learning both in the game but also in the industry at large.”

Nowhere is this more apparent than in Dauntless’ inclusion of cross-play. Up until late last year, cross-play between PC, PS4, and Xbox One was a pipe dream, primarily due to Sony’s stance on the issue. It was only with the pressure of Epic Games, backed by the cultural juggernaut that is Fortnite, that cross-play slowly began to trickle out. By partnering with Epic, Dauntless became the first videogame to launch on the three aforementioned platforms with full-cross play support. Phoenix Labs wanted to make Dauntless easy to play, and in Epic Games, found a partner who could make what was a wild dream a reality.

“We wanted Dauntless to be an experience where it’s easy to play together,” Mayne said. “That was always a part of the vision, even before cross-play became a part of that. And when we started to think about the next wave of platform expansions, we had already had a pretty good relationship with Epic because we use Unreal [Engine]. They’re very supportive of developers and we have a lot of friends, acquaintances, and former colleagues there, so we had a good working relationship. And when we saw where they were going with things, we realized there was this really great synergy to partner up with them. That, ultimately, is what helped us make the decision to come to the Epic Games Store which would also allow us to be cross platform.” 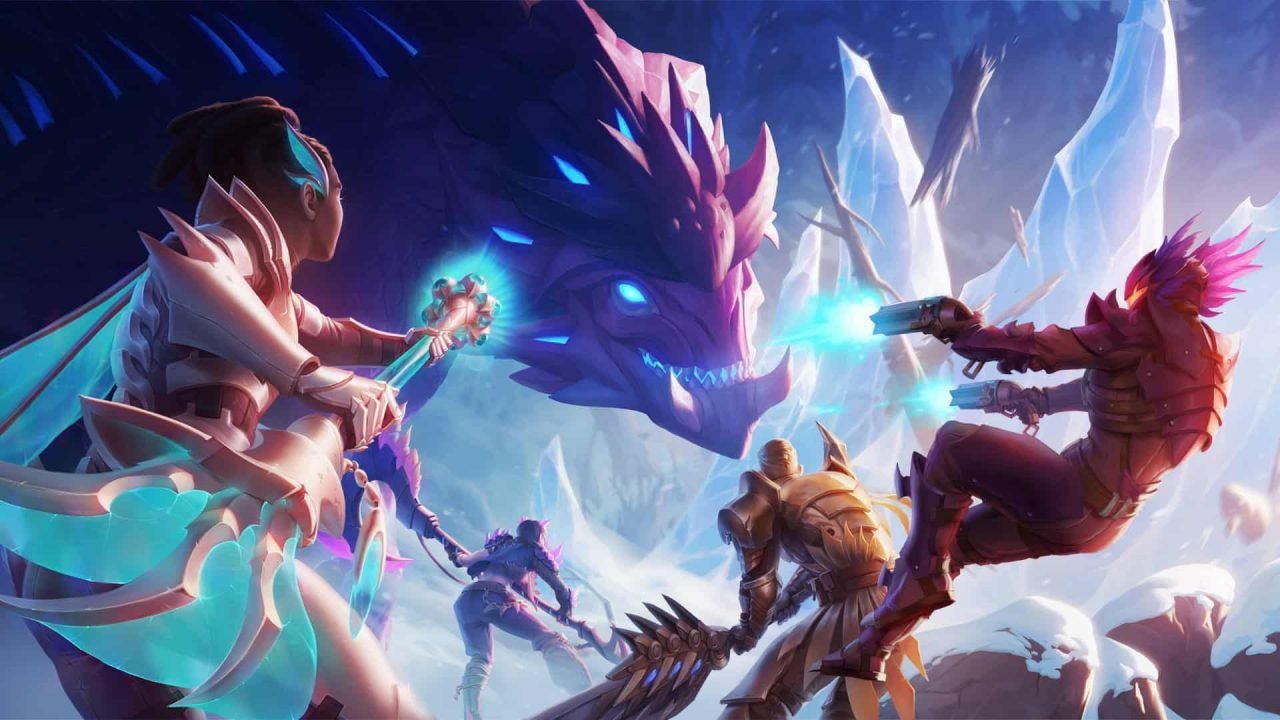 Despite the years of development it took to get to this moment, Phoenix Labs’ work has only just begun. With multiple platforms to manage and gather feedback for, there will be plenty of bugs and issues to sort out, along with a long list of updates that are roadmapped that must be fine tuned and released. To top it off, ports for the Nintendo Switch and mobile devices are being looked into, which would further increase the load should those plans be realized. But Phoenix Labs hard work has paid off; an audience of millions will have the opportunity to play and explore a world that has been slowly cultivated for nearly five years. And if all goes well, Mayne plans for Dauntless to grow and evolve for as long as possible.

“Our sole focus is on Dauntless, and we hope to be focused on it for years to come,” Mayne said. “We think there’s a lot of legs in both this game in the short run and as a service based game that we can continually update. We hope to be doing that for a very long time at some point. We may have an idea to start up an additional project and we have a great team to be able to do that. It is not easy to create a game from scratch, especially in the world of sequels, and that’s one of the challenges we wanted to take on with Dauntless.”